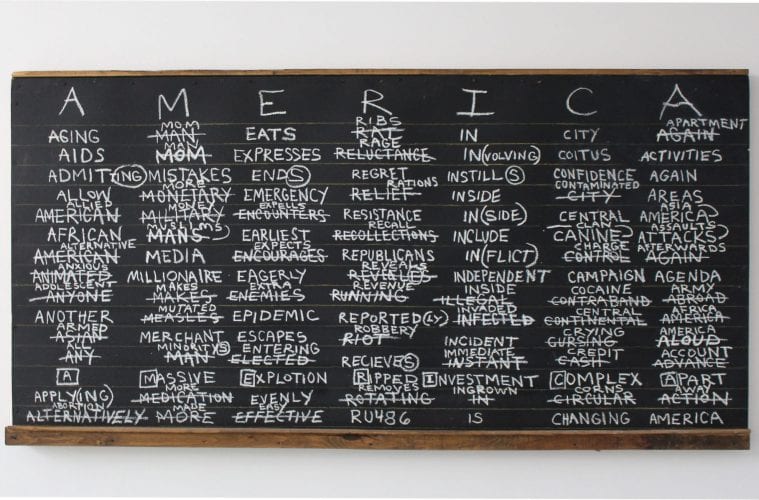 Review: “Art AIDS America” retrospectively shows us the face of an epidemic Robert Sherer’s contribution to Art AIDS America is a drawing called Sweet Williams, and it perfectly captures the power of this incredible exhibition. At its center is a wooden basket with three long stems of delicately placed wildflowers. Surrounding the basket, more wildflowers stand tall and proud, awaiting the hands that descend to trim them down with a knife. The hands fade away inside the frame, giving them an almost god-like quality. Everything about the drawing appears old fashioned, from the country motif, to the sepia-toned color palette; Sweet Williams could be on your Nana’s wall next to a family photo where many of the members have died.

But not everything here is at it seems. Sherer (a professor of art at Kennesaw State University) achieved the delicate, old-fashioned look of the piece by using HIV+ and HIV- blood which oxidized into a shade of burnt sienna. The description for the piece reads “[Sherer’s] grandmother, an avid gardener, often asked him to help gather flowers from her garden and instructed ‘Now, honey, cut down the most beautiful ones first.’ Upon reflection, Sherer realized AIDS was deeply correlated to beauty and sexual attraction.” Sweet Williams, like so many pieces in Art AIDS America, uses medium, composition, inspiration and concept to deal with weighty issues.

Those skeptical of a suburban, state-run institution’s capability to handle a heavy, controversial show such as this will be pleasantly surprised. The team at the Zuckerman Museum of Art have created a slew of supplementary educational programming to accompany the show, which will reach a very important group.

As one of the most engaging exhibitions to come to metro Atlanta in years, Art AIDS America is well worth the drive. The museum, along with, Kennesaw State University, have brought a truly cutting-edge, socially engaging collection to the public — for free — with an eye towards boundary-breaking work. Installation shot of Felix Gonzalez-Torres, Untitled (Water), 1995. Strands of beads and hanging device, Dimensions vary with installation. The Baltimore Museum of Art, Purchase with exchange funds from Bequest of Saidie A. May, 1995.73.

The entrance of the exhibition is a beaded curtain by Felix Gonzalez-Torres: cascading sparkling baby blue, silver and clear beads. Another Gonzalez-Torres piece is poised just beyond it, a stack entitled Untitled (Still Life), which invites the viewer to take with them a sheet of the light blue paper (it’s free, and there are several such takeaways in the show). On it are printed datelines significant to the artist — listed are his lover who died of AIDS, their dog and their favorite place to vacation. The constantly depleted yet infinitely replaceable sheets of paper are reminiscent of the sky blue HIV pills marketed by Gilead; an infinite supply necessary to keep the spirit alive. Gonzalez-Torres simplified themes of HIV and AIDS into a museum-friendly minimalism which some viewers may have trouble finding meaning in, and indeed these are not his more poignant pieces like the candy or clock works. But in their time his works were some of the first to talk about the AIDS epidemic in major art institutions. Gonzalez-Torres cut through government silence to bring awareness of AIDS to thousands of museum goers across America.

Art AIDS America could very well prove to be the most memorable blockbuster art show for the Atlanta area all year. This exhibition, which started at the Tacoma Art Museum, has seen a fair bit of controversy surrounding equal representation of minority artists. The curators at the Zuckerman have done a great deal of work — including incorporating new artists — to fairly represent minority voices in AIDS-related art. They’ve also used this as an opportunity to discuss how, especially in Atlanta, HIV disproportionately affects people of color.

Consider this: Today’s college freshmen were born in the mid-1990s — a point in time where anti-retrovirals turned HIV into a chronic condition. Today’s college students have likely never known someone who passed away of AIDS. Their entire concept of the virus may be based in historic, impersonal concepts.

At a Southern university, where the predominant number of students were likely to receive woefully inadequate sex education before coming to college, an exhibit such as this is of the utmost importance. The curators at Zuckerman had innumerable conversations with students: Some thought that nobody got HIV anymore. Some thought it was just a genetic condition — not sexually transmitted. Considering some zip codes in Atlanta have HIV rates comparable to sub-Saharan Africa, this type of ignorance is appalling. Art AIDS America will reach a very vital and vulnerable population, and do a great deal in preventing the spread of HIV to the next generation.

This is an exhibition that showcases the important role art can play not only in education but in cultural memory and activism.

Medical advancements shine through in the work, too. The earliest works carry with them a somber tone — clearly linking HIV infection with inevitable death. References to blood, Kaposi Sarcoma (skin lesions caused by HIV and an early sign of AIDS), and emaciation define many of these pieces. Works produced after the mid ’90s, when the three-drug cocktail drastically reduced AIDS deaths, deal more with empowerment and overcoming stigma. A video piece by Derek Jackson, Perfect Kiss (2007), shows the artist reenacting hook ups, demonstrating the need for open communication to avoid HIV infection. William Powhida’s Safe Sex Rules (2008) updates a dryly written guide with youthful language in order for teens and young adults to understand safer sex. The range of works curated by Jonathan David Katz and Rock Hushka shows how artists have used their practice to create understanding and compassion surrounding the AIDS epidemic. One of the most significant pieces in Art AIDS America is the Keith Haring altarpiece, which was the last work produced by the prolific pop artist. Part of a set of eight, one of its brother pieces can be found at the AIDS Interfaith Chapel at Grace Cathedral in San Francisco. Sitting, it’s easy to be hypnotized by the flowing lines and imagine an ailing Haring carving his final masterpiece. Haring’s dancing figures are carved along the base of the triptych. Above them a many-armed being cradles Haring’s iconic radiant baby figure, taking him back up to heaven. Tears fall on the dancers. Angels fly above like souls being freed from their earthly bindings. The altarpiece embodies Haring’s ability to create exuberant, emotive characters out of simple seamless shapes. His joyful, uninterrupted line finds beauty in the sorrow of death; in this piece we see the artist truly accepting his imminent demise from AIDS. Unerring sadness smolders with Sue Coe’s print Kaposi Sarcoma (1993). This woodcut shows a doctor massaging a patient with AIDS — his disease signaled by the cancerous lesions covering his back. The gray-haired doctor hunches over a skeletal young man, and with bare hands the doctor gently massages the patient’s back. They are lit by a golden white beam, coming at sharp angle, like the light of God in a Caravaggio painting. Below the print reads, “He positioned himself to me like he wanted to be touched.” One recognizes that the near corpse depicted in the picture was a man undoubtedly once touched sensually by many beautiful lovers, but now his disease has marred him into something very few would dare touch. This kind doctor, perhaps an older gay man himself, shows his dying patient much needed compassion. Even the most gentle, personal touch eased the pain of AIDS.

In the same room, a Duane Michals photograph shows a boy with Apollonian beauty laid peacefully on a bed with stark white sheets. The piece, The Father Prepares His Dead Son for Burial (1991), features a poetic handwritten caption that ends with “THEN THE FATHER BEGINS TO QUIVER WITH GRIEF, AND THE VIBRATION OF HIS MOVEMENT BECOMES A SOUND. LIKE A DEEP MOAN THAT GROWS LOUDER AND LOUDER, INTO A TERRIBLE SHOUT OF ANGUISH.” Usually Duane Michals writes his captions in a tight, lyrical cursive; this caption is written in blocky capitals with shaky lines and doubled-over letters. Michals writes the note from the emotional viewpoint of the father talking about his deceased son. Several pieces like this serve as memento moris — reminders of death — which adds an emotional heaviness to this show. Traces of people who have died of AIDS can be seen all over the exhibit. Daniel Goldstein’s Icarian I Incline resembles the Shroud of Turin — a leather sheet stretched inside a frame, marks of wear form the shape of a man. The piece is actually the covering from a workout bench at “Muscle Sisters,” a gay gym in San Francisco, and the ghostly imprint is the trace of thousands of men, many of whom probably died of AIDS. The incredibly striking work Pages of a “Blueboy Magazine” by Pacifico Silano features the faces of 100 beautiful men — models from a porn magazine. Silano tries to construct an identity for an uncle who died of AIDS when the artist was very young. What’s looking back are the faces of many more unknown men touched by AIDS; the beauty in their portraits belies the ugliness of the epidemic.

The installation of the exhibition creates connections between unrelated works, weaving themes within the show. Sightlines are arranged carefully so recurring motifs, such as the pink triangle, can be seen on multiple pieces at once. Wondering what the marble chairs are doing to make them so unique? Look up and you’ll notice a print of the word “FUCK” shouting at you.

The most jarring piece-to-piece connection starts with a teddy bear in a little coffin. The macabre scene is amplified by the face of a young boy regarding the viewer. The untitled piece plays off David Wojnarowicz’s One Day This Kid, and uses a wraparound text to foreshadow how HIV will affect this little boy. The artist writes: “He will carry on despite the daunting ‘I hope you die of AIDS faggot’ taunting because the dangerous pleasures he will immediately know are both sustaining and addictive.” Such words are jarring to read when they surround depictions of childhood innocence; this piece reminds viewers how future generations will inherit the burden of HIV. In this same area is a trio of photos by Kia LaBeija, from the famed ballroom house of LaBeija in Paris is Burning, which show the literal face of generational HIV. LaBeija was born HIV positive, and produces work from the viewpoint of someone who will only know life with the virus.

Art AIDS America is a game-changer. It has the capability to not only alter perspectives on the AIDS epidemic, but on art’s ability to respond to charged issues within our country.

For so many people, AIDS is merely an idea — something people from another generation suffered from. This exhibition gives the epidemic a face, it is unflinching in the physical and emotional tolls the disease can take and gives us a chance to mourn the lives we’ve lost to it. Perhaps most paramount, it uses the language of art to tell a story and teach us a lesson: We all live with HIV.