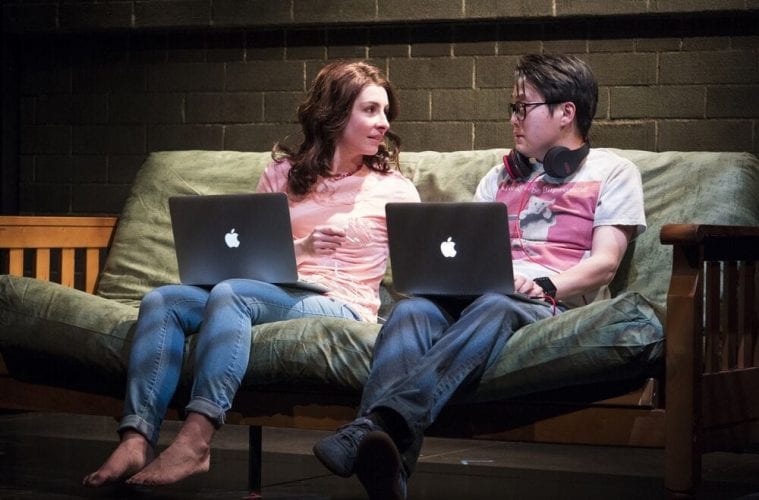 Review: “Start Down” is a good but imperfect start up for Kendeda playwright Eleanor Burgess Annie Purcell and Eric Sharp in Start Down. (Photo by Greg Mooney)

Could computers ever replace teachers? Those of us who hated high school often wondered.

The possibility becomes the topic of serious and considered speculation in the new play Start Down by Eleanor Burgess running at the Alliance Theatre through March 6.

The play is this year’s winner of the Alliance/Kendeda National Graduate Playwriting Competition, an annual contest that recognizes outstanding work by playwrights currently in graduate programs by providing a group of finalists with public readings and the winner with a full professional production at the Alliance’s Hertz Stage.

Early winners, including Tarell Alvin McCraney and Ismail Khalidi, have set a very high and very prestigious bar for the competition.

In the new show, Will (Eric Sharp) is a young computer programmer who is convinced he could emulate the success of his bloviating peers and leave his servile job at a lame Internet company if he could, like them, simply come up with the right idea for his own start-up.

He’s married to Sandy (Annie Purcell), a committed and innovative teacher, and her candid discussions about the problems she faces at school lead him to develop a computer program that can help students learn by recognizing their deficiencies. But, as we learn, the program also has the potential to make teachers obsolete in their own classrooms, creating conflict among the play’s protagonists.

The production is marked by some strong performances. I especially admired Purcell as a believable, likeable Sandy, effectively dramatizing that character’s divided loyalties as both an idealistic teacher and as a committed partner supporting the ambitions of her fiancé.

Tracey Bonner does interesting and evocative double-duty as Karen, Sandy’s vivacious and opinionated colleague who is entirely resistant to Will’s ideas, and also as the voice of the computer program itself, pleasantly and flatly guiding students in this questionable new form of learning.

Burgess is a fine writer, and the engaging, intelligent play clips along at an admirable pace. But the play shares some of the problems of recent Kendeda winners in that we occasionally feel that the contemporary issues faced by millennials and Gen Y-ers are too deliberately laid out as such.

And in the end, there’s something too polite, academic and unimpassioned in the approach. The presentation of the issues feels so even-handed, things become less interesting, not more so.

The overarching strategy is authorial objectivity, an unopinionated dramatization of the characters’ dilemmas as they try to sort through the thorny issues for themselves.

But a viewer can nonetheless still divine a number of reasonable stances taken in relation to computers in the classroom. Burgess clearly feels that the advent of more computer-based learning is somewhat inevitable, that there may be some students who might prefer and even benefit from it. Burgess also believes that, in the end, computers could never replace the humanity, quirkiness, intuition and emotional connection that a good teacher can have with a student.

All of these opinions are reasonable, and they’re also all familiar, even a little middle-of-the-road (they’re all opinions that are likely shared by everyone in the audience both before and after the show).

One can imagine a play in which the abuses, pretensions and errors of human teachers are scathingly satirized, with the writer coming to the embittered conclusion that a classroom full of anesthetized students staring cretinously at computer screens would actually be a preferable state of affairs, or a play in which the writer shrieks an Orwellian warning about the encroachment of computers and capitalism into schools.

Such impassioned, biased plays might be unlikely to find success in a graduate writing program or in a contest such as the Kendeda, and perhaps that’s for the best. Still, there’s a niggling and somewhat troubling suspicion that such plays might actually be more exciting to watch.