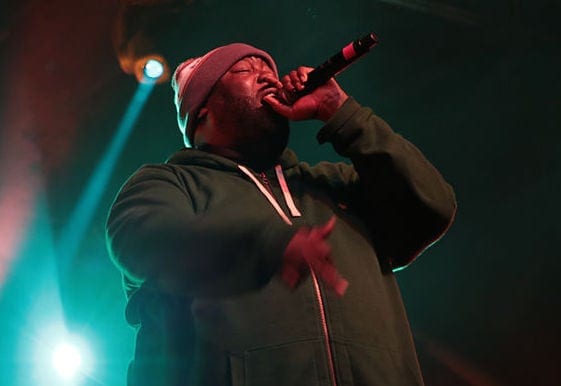 Opinion: Are We On the Verge of a Hip-Hop Inspired Political Revolution?

We are officially moving into another “I’m Black and I’m Proud” era in pop culture. The social and political consciousness once characterized by 1990s hip-hop has resurfaced in a 21st century global kind of way. And it’s happening “overground” — that is, where everyone can see it. We can witness it. We can touch it. It’s right before our eyes.

Contemplate the past three weeks alone: Beyoncé released a video for her single “Formation” using it and her subsequent Super Bowl performance as platforms. Mrs. Knowles-Carter evoked the ghosts of Southern Black (Panther) Pride Hanging Out the Hooptee Queen Swag…with long braids and a gold “X” on her chest. Then King Kunta — ahem, my bad — Kendrick Lamar spooked the bajesus out of some white (and black) folks when he performed a break-the-chains séance at the 2016 Grammys. What started in jail — maybe even a mental jail — landed the MC and the words “Compton” squarely in the middle of the African continent. For some reason, several deconstructions of his performance neglect this key piece. But I digress.

Just a day later Morehouse College hosted a Bernie Sanders campaign: An all-inclusive rally filled with barking, chanting and African stepping from the men of Omega Psi Phi’s Psi Chapter. The highlight of the evening, however, was the passionate introductory remarks of Michael Render (a.k.a. Killer Mike), a former student of the historically black colleges and universities and an activist who continues to publicly endorse Senator Sanders for his 2016 presidential bid.

So let’s use our hip-hop imagination for a moment. What if Killer Mike ran for president …o f something? King Kendrick could be his “running mate” and Queen Bey their “secretary of state.” Would you vote for them, especially given Lamar’s political consciousness, Mrs. Knowles-Carter’s international success and the social justice agenda Render described on The View last Friday? On the surface, Render was there to defend himself after a journalist decontextualized a reference Render made to a conversation had with fellow activist Jane Elliot.

But Render’s visit to The View served a much bigger purpose. In just over seven minutes, he called for an updated social justice model inclusive of Kingian views on civil rights that speak to contemporary evils of war, poverty and excessive materialism. He moved beyond traditional perspectives that situate minorities — particularly women — on the periphery when attacking these evils and achieving Dr. King’s ideal of a “world house.”

He acknowledges Shirley Chisholm as one of his sheroes, adding she should have been the first woman and black person in the White House.

He also shied away from any gendered language when Joy Behar asked him to talk about how his comments “ruffled feathers.” He then gave history on his background as a social activist, which began at the age of 15 and has continued via music, entrepreneurship and youth leadership development. He didn’t point to a particular experience, but I conclude he is referring to when he was president of his high school’s chapter of Black Teens for Advancement. BTA was a student-led group founded to eliminate violence between rival high schools in the Atlanta area. So off the rip he lets the ladies know he is not an overnight social activist success.

He also acknowledges having nothing against Hillary Clinton. Rather, he points to “a system” he is fighting where big money politics sets the election pace and policy agenda. He situates the issues of black people as relevant to those of women, queer and other communities of culture just before explaining the difference between a Goldman Sachs Super PAC and a Super PAC of nurses. The smartest strategy, however, is the 8th grade definition he provided for what social justice is. He says,

The heart of this statement rests in the ideal of inclusivity, which is the burden, blessing and power of hip-hop. Lamar calls it “HiiiPower.” Bey calls it getting in “Formation.”

No doubt, Render was nervous. Perhaps Beyoncé had butterflies as she marched out on the field with dancers looking like Angela Davis. I’d put five on it: Kendrick was anxious too. After all, the Grammy producers censored him. But who wouldn’t be when there’s potential to raise the hackles of a constituency of narcissistic supporters who don’t look like you, think like you, aren’t concerned about those who do, but write checks on your behalf?

I’m also sure those tuned in realize Beyoncé Knowles ain’t just a fair-skinned pretty face that can dance and sing her ass off, or Kendrick Lamar is just a small guy from Compton who can rap. Don’t mistaken Render’s tall stature, dark complexion and Southern vernacular as code for an uninformed “big black guy.” To do so is to catch the vapors.

Sporting a plaid oxford, with glaring diamond stud earrings, a freshly groomed haircut and shave I’ll bet was the work of a SWAG Shop barber, and the infamous pinky ring, Render, like his two colleagues, held it down for hip-hop, millennials, those who #FeelTheBern now and those who will continue to “feel the burn” if nothing changes for America’s oppressed minority populations. That means everybody: All y’all.

Maybe the sociopolitics of hip-hop are a trend. Perhaps I’m overly optimistic. Whether it’s “cool to be conscious” is definitely debatable for another essay. I’m just glad to see it cycle around with hopes to see more of it on the tell-lie-vision, on the radio and on the film screen.

Joycelyn Wilson is an assistant professor of social foundations of education and qualitative research at Virginia Tech. She’s founder of the Four Four Beat Project, an Emmy-nominated docu-film producer, author of “Curating Pedagogies: For Those Who Love God…and Trap Music” (forthcoming), and a 2011-12 Hiphop Archive Fellow in the WEB DuBois Institute, Harvard University. Her current research meets at the nexus of Black music pedagogy, ethnography, digital media and technology.