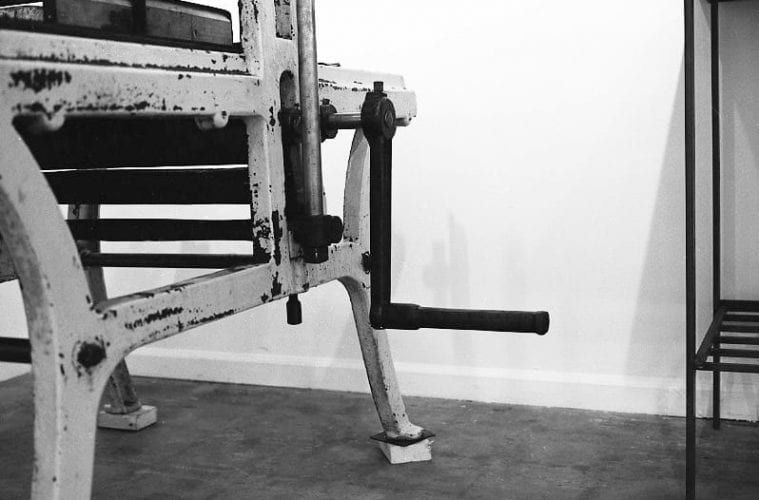 A Conversation with Dianna Settles, printmaker and co-founder of Hi-Lo Press 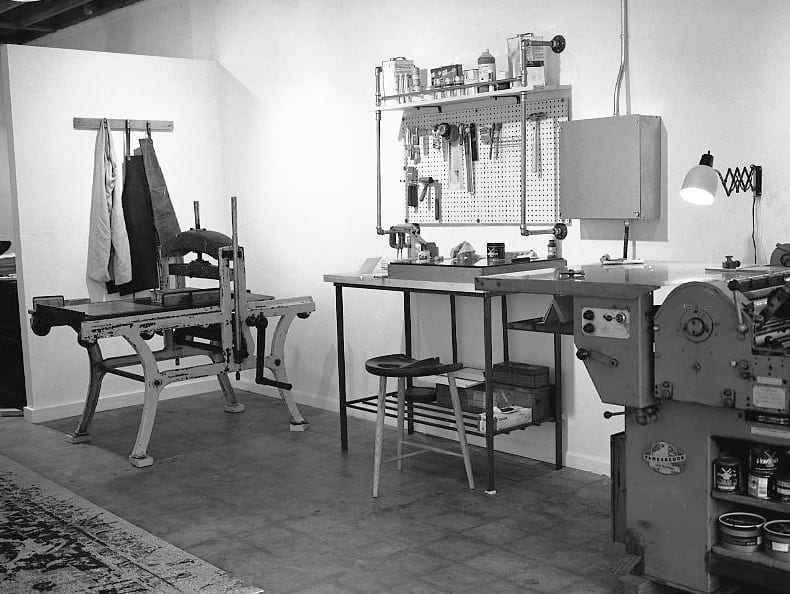 Returning to Atlanta from the Bay Area, printmaker Dianna Settles, along with her partner Witt Wisebram, have big plans to revive the venerable Beep Beep gallery space into a working print studio — Hi-Lo Press. Equal parts working artist space and store front, Settles has imaginative plans to spark interest in the arcane arts of letterpress and printmaking with the opening of Hi-Lo Press. From Charles Allen Drive, you can watch the cranks of the press turn, the paper glide over rolls and the gears halt as an original image appears pressed into the surface. Settles flips the switch again, the rollers move back to starting position as she steps over to examine the print. Her eyes dart around the page, then she says to me, “Want to make a print?” Her inclusive and spirited demeanor is the foundation for the press itself, everyone is invited to step up, take a turn and get into something that requires a little bit of elbow grease.

ArtsATL: What is your vision for Hi-Lo Press as a public space to experience the art of printmaking?

Dianna Settles: I think the openness of the space and the visibility of the presses lends itself to people coming into the studio out of curiosity. It’s been happening the whole time that we’ve been getting the space ready. I want strangers to feel comfortable coming in and asking questions. I like that the space is wedged between two longstanding Atlanta trades workers, the alterations company and the shoe repair store. I want to help rekindle an interest in printmaking and the visibility of the presses and studio from the street will do that.

ArtsATL: Tell me about the premiere exhibition, First Fire, and how you selected the exhibiting artists?

Settles: The title First Fire comes from a ceramics term that means to prepare the form by vitrifying the clay. I thought it was fitting considering that Witt and I have been spending so much time at the space getting it ready.

I wanted to have a mix of artists who had shown work at Beep Beep as well as artists that haven’t shown in Atlanta. Another point I am making in the process of selecting artists is that I want to make sure there are always at least an equal number of women in the show as there are men. Since most larger institutions underrepresent female artists, I want to consider this issue in the curation of the space. 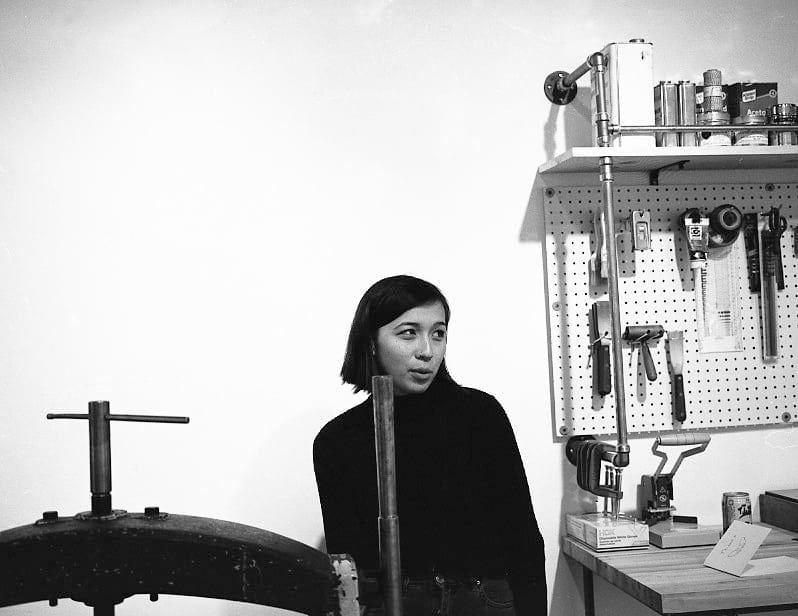 Dianna Settles with a Robert Mayer Park press from 1846, photograph by Stephanie Dowda.

ArtsATL: What is special and exciting about the presses you obtained for Hi-Lo? What are the history and capabilities of each press?

Settles: Witt and I bought the litho press (a Robert Mayer Park’s press) last winter from a guy named Perry Tymeson in Jersey City. We are the fourth owners. Perry refurbishes and repairs presses and it was totally by chance that we even saw it for sale while we were in New York City for the last weekend of the Matisse show. We drove our van back up a couple weeks later to take it home. It’s from 1843 and has the original cherry press bed. Perry is amazing and excited that people our age were still interested in these machines. He taught me all sorts of other tricks that only come from years of working with these. Lithography is my favorite method of printmaking. It has the ability to replicate any kind of mark making, you can get pencil marks, crayon, ink or you can do photo transfers. I love it.

The letterpress is a Vandercook SP25 from 1963. We found this for sale in Atlanta. The previous owner had maintained it well and we had Paul Moxon from Alabama, who is the go-to person for all things Vandercook, check everything out. It’s the first letterpress I’ve used with an automatic drive instead of a hand crank. It also has a printing surface the size of a newspaper. I can print linocuts on this press and have the ability of printing woodcuts on the litho press so there’s potential for all kinds of crossover and mixed-media prints. 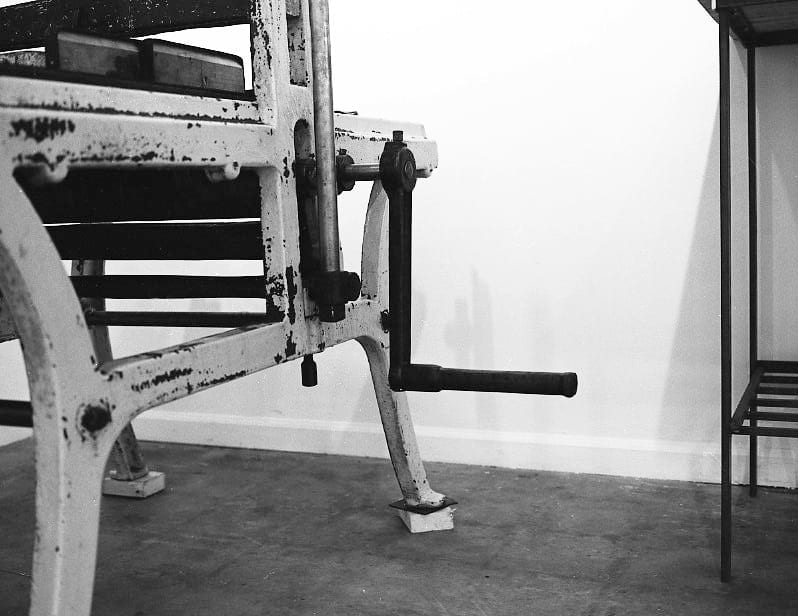 Close-up of the Robert Mayer Park press from 1846, photograph by Stephanie Dowda.

ArtsATL: Opening a print studio seems risky and almost a way of staking a claim to handmade traditions. Do you feel like Hi-Lo is some form of activism?

Settles: I think that the act of making art in general is a form of activism. It challenges current ways of looking at the world by outfitting it with new perspectives and compositions. Continuing inside of this address as a place for the arts also feels like a very important act. The fact that Atlanta had a location that has housed so many people’s work and served as a forum for people to meet and share ideas is remarkable. Beep Beep was a great resource. And it was L’Avenue before that, and Sister Louisa had a gallery here before that. It’s historically a part of the art community; we wanted that to continue. It’s going to be a tighter squeeze with the presses here, but it won’t be the most bizarre place to hang art. I’ve seen art displayed in basements, bedrooms and even a camper once. Those gatherings are important. I think it’s especially important to provide creative, independent spaces in light of all of the development. The landscape of Atlanta is changing rapidly. Places like Hi-Lo, Mammal Gallery and Mint are necessary to contrast all the chain stores and franchises.