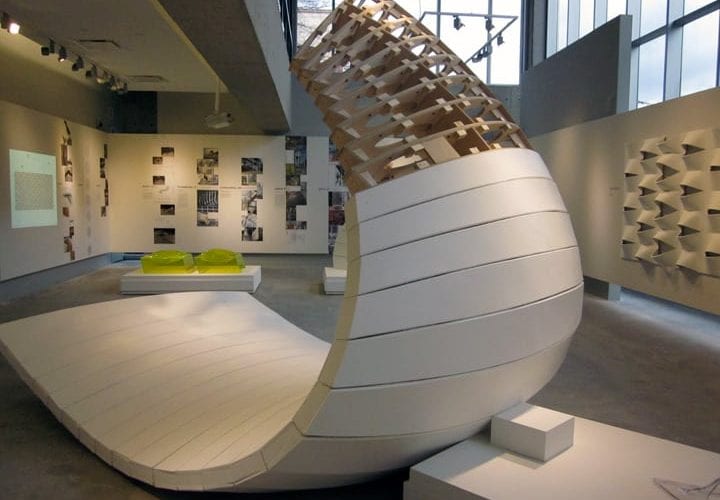 As word associations go, “research” does not generally evoke “fascinating art exhibition.” So ignore your preconceptions and see “Emerging Voices 11” at the Museum of Design Atlanta. The multifaceted show, which is sponsored by Atlanta’s Young Architects Forum and the American Institute of Architects Atlanta Chapter, features displays of YAF projects and solo exhibits by YAF honorees Ryan Gravel and Tristan Al-Haddad. Go soon: it closes January 22.

MODA’s long corridor gallery is devoted to designs for a temporary portable structure to serve Atlanta’s growing food truck industry, all completed during a 48-hour charrette. It’s a great topic, addressing issues such as repurposing parking lots as public space and place-making, and the architectural teams put forth a slew of creative and visually winning ideas.

Al-Haddad fuses architecture, science and art in a practice based on pushing the boundaries of materials, digital design and construction. His work is as smart and elegant as a mathematical proof. This exhibit encompasses projects that one might describe as pure architectural research and those that result in structures that straddle the line between architecture and sculpture. Al-Haddad has, in fact, created site works for FLUX and other public-art exhibitions, and he won anArtadia Award in 2009.

The Georgia Tech professor has papered the walls of the gallery with photographs and text to illustrate various projects. For example, his research with high-performance concrete led to a prototype for a new kind of mold-made curtain wall, which contains a system that captures solar energy.

Its fluid forms evoke Barcelona architect Antonio Gaudi. Al-Haddad favors the biomorphic, both to suggest architecture’s relationship with bodily structure (or orifices, as in “Pucker Up,” a witty experiment with Corian) and as a counterbalance to architecture’s typically Euclidean geometry. In this he continues a long line of inquiry, most recently by the likes of Frank Gehry and Greg Lynn.

The architect brings his curiosity about materials and formal proclivities to “Möbius,” the sculpture that dominates the gallery. As its title suggests, it is a curvy form, constructed of panels of Corian milled in a method Al-Haddad devised. At present it is a work-in-progress; you can see the spine-like support, devised in conjunction with structural engineer Jamie O’ Kelley. When completed it will be 14 feet high.

Al-Haddad intended to place it in MODA’s plaza, where it would act as a portal to the museum and offer a dialogue with the Alexander Calder sculpture on the High Museum of Art’s lawn across the street. Time, budget and other exigencies foiled that plan. (There was, for instance, no way to bolt down the 4,000-pound piece, and, given its aerodynamic shape, it might even have levitated in the wind.) “Möbius” will probably be displayed in September at the Centre Georges Pompidou in Paris in conjunction with the 2012 Advances in Architectural Geometry symposium.

Closer to home are the four temporary site sculptures on the Atlanta BeltLine, which Al-Haddad created with Tech students. They explore ideas of landscape, memory (the BeltLine’s history as a railroad loop) and how such sculpture can define and animate public space. Renderings of a permanent sculpture he designed for the BeltLine are also on view.

That 22-mile BeltLine loop is at the heart of Gravel’s solo show. An architect and urban planner with Perkins + Will, he conceived the BeltLine project and is design manager for the Atlanta BeltLine Corridor Design. Gravel has taken this opportunity to position the BeltLine in a national context. It is one of two dozen projects he characterizes as “catalytic infrastructure,” his term for public works projects that not only improve the lives of residents and spur economic development but also serve as demonstration models of what is possible in a contemporary city.

The BeltLine is represented by an artful, rather abstract walk-around map that encircles a long wall. Gravel has marked various spots with clusters of circular photos: glimpses of the loop’s past, present and future. A rusty length of rail spanning two pedestals rests on a bed of the same photographic discs.

Gravel devotes most of his show to research he has conducted in Los Angeles and Detroit. The Los Angeles River Revitalization Master Plan is an effort to restore the 52-mile waterway, now a concrete channel. In addition to its ecological benefits, the restored river, as vista and amenity, will attract residential and commercial development.

Detroit is an irresistible subject for an urban planner. A city with not much left to lose, it’s ripe for imagining and effecting radical change. Plus, as Gravel notes, it has good bones in its strong city grid. In contrast to grand schemes that some have floated, Gravel’s exercises are relatively modest and pragmatic. He goes about humanizing and making car-oriented roads more pedestrian-friendly by inserting linear parks and bicycle paths as boulevards on overly wide roads.

Of such projects across the country — New York’s High Line is small but notably successful — the Atlanta BeltLine is, Gravel says, among the most ambitious. For Atlanta — not a visionary city in matters of urban design, to put it mildly — it could be the brass ring. In addition to transforming how we sense, use and move around the city, it can raise public expectations, a necessary step toward building the political will to change.