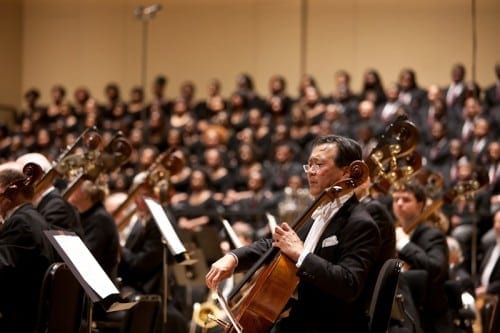 “A King Celebration,” an annual Atlanta Symphony Orchestra performance that celebrates its 20th anniversary this year, has become one of the touchstones of the city’s musical life. Live and taped broadcasts are heard by an audience estimated at 2.5 million nationwide, far eclipsing the number who hear the orchestra in person in a year. Beyond the size of the audience, there is the cultural significance of the event, which celebrates the life of a native son who became an international icon of freedom, as well as the social importance of an evening that has become a sort of homecoming for Atlanta’s African-American elite.

The concert, held at Morehouse College’s King International Chapel for many years, has come to feature a guest artist, as well as the glee clubs from Morehouse and Spelman Colleges. For this anniversary year, the guest artist was famed cellist Yo-Yo Ma, and the decision was made to move Thursday’s concert back to Symphony Hall, which can accommodate a larger crowd.

Ma played Dvorak’s Concerto in B minor for Cello and Orchestra, arguably the finest work ever written for cello and orchestra, and the performance was a revelation. Ma’s playing is unrestrained, combining a stunning intensity with great warmth and tenderness. There is no one else like him, and watching him play changes how you hear the work. He has an extremely expressive face that radiates the joy and sincerity that he brings to his performance.

The concerto provides rich opportunities for the orchestra, led by Robert Spano, and here everyone seemed to sparkle, perhaps inspired both by the historical nature of the evening and by Ma’s performance. The horn solo in the first movement, performed by Brice Andrus, was a study in refinement. The exchanges between Ma and the clarinet, played by Laura Ardan, were finely executed. And the duet with violin in the final movement was first rate, showcasing ASO concertmaster David Coucheron. By the time Ma lingered on the piece’s final notes, it was clear to pretty much everyone in the room that we had experienced one of those great moments in the concert hall.

The first half of the program, before Ma appeared, started with an odd vibe. In the years when the concert was held at Morehouse College, the audience, almost entirely African-American, had a friendly enthusiasm and easy informality that gave it a special energy. As people settled into Symphony Hall, this seemed to have evaporated, as if the building itself carried a sort of stiffness. Regulars from the Morehouse venue had to adjust to a very different seating arrangement, and because this was not a subscription concert, ASO regulars also found themselves relocated. The concert opened with Beethoven’s “Fidelio” overture, a sensible choice given that opera’s focus on freedom (and a piece that has appeared on this concert’s program several times). It was an elegant reading, but it did nothing to resolve the chill in the air.

Next up was “Elijah Rock,” a traditional spiritual sung a capella by the two glee clubs, led by Kevin Johnson, and the whole atmosphere in the room seemed to change, with smiles all around. This was followed by “How Lovely Is Thy Dwelling Place,” an excerpt from Brahms’ “A German Requiem,” featuring the glee clubs and the orchestra under Spano, and the old warm feelings from Morehouse had clearly found their way across town.

Joseph Schwantner’s “New Morning for the World” is a 1982 tribute to King that interweaves texts from several of his speeches with orchestral music. The model is clearly Aaron Copland’s “Lincoln Portrait.” It’s a noble and rather earnest work that includes ample percussion flourishes and brass fanfares, nicely played here. Mayor Kasim Reed brought dignity to the narrator’s role.

After the Dvorak, Ma moved to a corner of the stage for an encore, the Sarabande from Bach’s Suite No. 5, and this was used rather neatly as a segue into the concert’s traditional finale, a stirring orchestral and choral arrangement (by Uzee Brown Jr.) of “We Shall Overcome,” the great anthem of the civil rights movement. This never fails to bring down the house. But there was one difference: at Morehouse, the audience would join hands and sing along. Here, as the words “we’ll walk hand in hand” were projected on the screen, no one picked up on the cue, missing a moment for powerful symbolism. But the more important task — bringing together the orchestra’s overwhelmingly white regular audience with the mostly black audience from the years at Morehouse — was a big success. And, in the end, the spirit of the evening survived, helped in no small way by Ma’s musical tour de force. It was a night when Atlanta came together.

Highlights from the concert will be broadcast beginning at 8 p.m. Monday, January 16, the King holiday, on WABE radio, 90.1 FM, as part of American Public Media’s “Performance Today.”