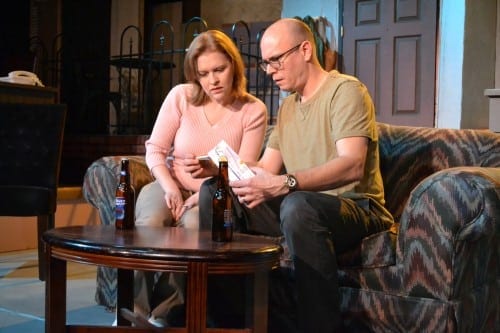 Review: In OnStage Atlanta’s “40 Weeks,” pregnancy shakes up a marriage

The title of the play “40 Weeks,” at OnStage Atlanta through January 28, refers to 40 weeks of pregnancy, and as it follows couple Mark (Geoff “Googie” Uterhardt) and Angie (Barbara Cole Uterhardt) over that period, it becomes far more than a cutesy dramatic version of “What to Expect When You’re Expecting.” It delves into deeper territory: the fragility and precariousness that can surface when new, unstable, radioactive elements are added to even the most stable relationships.

Barbara Cole Uterhardt and Geoff Uterhardt are convincing as Angie and Mark, a married couple
dealing with changes in their relationship as a result of her pregnancy.

The lead actors, who are married in real life, are (perhaps unsurprisingly) compelling and convincing as the couple. Mark is a writer, and he’s unsure how the arrival of a baby will affect his professional ambitions, an area that already causes him a great deal of self-doubt. Angie is unable to let go of a past love and, though she’s supportive of Mark, has trouble suppressing the suspicion that she has married a loser, especially when an old friend arrives and seems determined to stoke that misgiving.

The supporting cast is especially strong, and playwright Michael Henry Harris is smart to let a developing romance between two peripheral characters in the first act take a more prominent role in the second. Bryan Brendle as Scott and Suehyla El-Attar as Molly have a relaxed, believable approach to portraying the sparring couple. Michelle David has a familiar role, the brassy co-worker with a heart of gold, but she brings so much originality and panache to the character that by the end, we feel she should have been on stage more. There was a baby shower at the end of Act I, and she wasn’t invited; perhaps she should have crashed it.

Designer Travis George’s set is divided into areas that show various locations in New York: apartment, office, balcony, subway car. During the first act, the characters seem too confined in the different realms; the five actors don’t interact enough in different ways in different places. In the second act they’re shuffled around a bit more, and the pace picks up almost immediately because of it. The opening of Act II, in which Molly and Scott share a morning-after breakfast on a balcony (which wasn’t visited at all in the first act), is so funny, energetic and revealing that we wonder why it took us so long to get there.

Somehow Mark and Angie’s cynical initial agreement when they meet as strangers in an opening scene — they agree not to delve too deeply — lingers over the action, making their later intimacy seem like a mutually agreed-upon construct. But their relationship, which is at risk, must seem thoroughly genuine for us to care, and it takes us awhile to understand that their intimacy five years later is for real.

Harris is certainly a playwright to watch. “40 Weeks” is a first play that doesn’t feel like a first play, but it still cleaves too closely to familiar, if successful, tropes. We the audience are well taken care of. Everything seems designed with us in mind: the recognizable and likable characters, the familiar New York setting, the capable pacing, the clearly limned dramatic arc, the flashes of smart comedy. One feels that the play might benefit from a few flashes of indifference on the part of the playwright toward us, that he perhaps should go off to explore more individualistic territory without looking back at us so frequently to check for our approval. In the play, one of the insights that the character Molly has mastered (she knows it so well that it actually becomes a problem for her) is that a splash of indifference on one side of a romantic relationship can spark passion and interest on the other. As in love, so in art: independence and strength of personality can arouse our curiosity more than the kindest attentions. Still, in the end, “40 Weeks” is a promising start to what one hopes is a long-term affair.