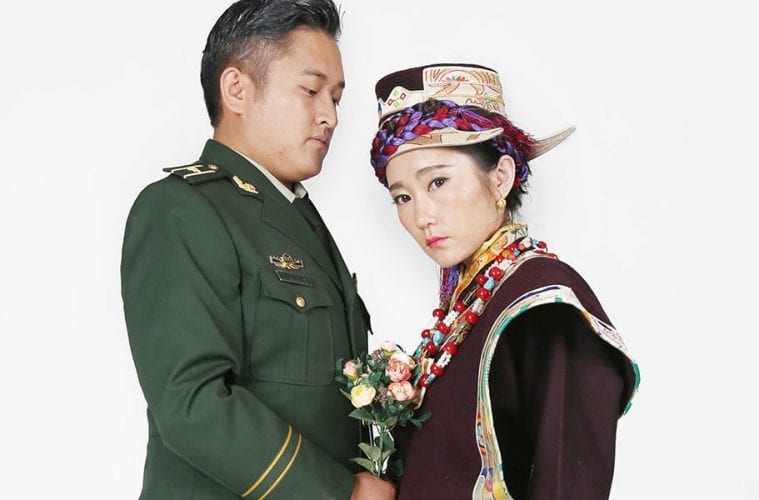 “This is what modern Tibetans look like,” Gonkar Gyatso says about Family Album, his exhibition of photographs at the Michael C. Carlos Museum at Emory University. This is a series formal portraits (posed figures with white backgrounds, made in collaboration with photographer Zhadui) of the artist’s family in various modes of dress, both standard prints and a roomful of life-and-near-life-sized cutout figures, all intended to portray the different ways Tibetans live. 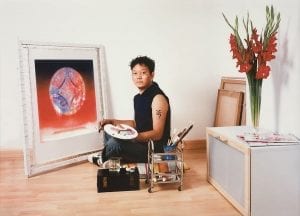 In presenting his family members in various modes of dress, Gyatso continues the method of his earlier work My Identity (2003), in which he photographed himself posed as a Tibetan thangka artist, “a punky-haired contemporary artist in ‘the West’,” a Communist Party propaganda artist and a Tibetan refugee artist (a fifth was added in 2014). Each image shows Gyatso with the same posture and blank expression. While each of these identities is a portion of Gyatso’s own confused identity, the figures in Family Album don’t appear confused at all. Rather they wear their different outfits comfortably, and physically convey confidence in the roles they take in wearing them. His father is a member of the Communist Party, his niece is a Buddhist nun, and so on.

More generally, is there something unique to being a Tibetan that is explored by these multiple identities. A person wears one set of clothes to work, another to play tennis and still another when performing music. This fracturing of identity by virtue of varied action is ubiquitous amongst human beings – it is a simplification of the idea of identity to imagine that a person only has one set of clothing, or that identity is ever captured in one outfit.

Gyatso’s photographs don’t rest on this simplification, but they do underscore both the sudden variety of choices that modern Tibetans face with the infiltration of their long-isolated culture by consumerism, Communism, and globalism. One gets the impression that Gyatso would consider the expectation of Western viewers to see all Tibetans as in a constant state of outrage at the recent history of their country as just as parochial and outdated as the view that all Tibetans are yak herders and lamas.

It is also true that this claim threatens to become a somewhat tired and Orientalist one. But are ignorant and outdated views worth a serious response? Gyatso’s Family Album asks the question whether Tibet is still a place defined by its own place-ness, or if instead if its recent, rapid and repeated collisions with other cultures has made the idea of it as place defined largely by itself a theoretical impossibility.

Gyatso says that he wants to move back to Tibet to see first-hand the changes occurring in the gray areas of modern Tibet. In his work, he chooses not to participate in the black-and-white dichotomy between “bad China” and “good’ Tibet”. The West’s preference for selective images of Tibet (self-immolations, for instance) presents a very narrow view of the place. Gyatso is interested in showing a wider view, of people coping with present-day realities.

Psychologically, the images portray contemporary Tibetans’ ability to shift from one mindset to a seemingly contradictory one without difficulty. Gyatso says his parents would sometimes go directly from a Communist Party meeting to the Buddhist Temple. One wonders, within the minds of Tibetans forced to contort themselves from one ideological place to another, if there is the same easy-going indifference to the source of such philosophical contortions as Gyatso describes.

Gyatso described his use of traditional Buddhist imagery in his earlier work as unconnected from its religious or historical associations. Rather, he employs images of Buddha, Bodhisattvas and the like in the same way a landscape painter uses mountains, trees and clouds. Buddhist imagery is simply part of his landscape. He isn’t asking viewers to consider Buddhist philosophy or the brutal repression of the religion in his homeland by the Chinese government, in just the same way that a landscape painter is not suggesting the viewer study geology or book a plane ticket to see the White Cliffs of Dover.

This tendency to de-valorize Buddhist images seeks to align modern Tibetans with post-National, post-ethnic and post-Religious ideas that are largely the province of critical thinkers, idealists and international artists. The photographs don’t simply show that Modern Tibetans are not all yak herders, but also that some Tibetans are, as Gyatso describes himself, like a banana: “yellow on the outside, white on the inside.” But are modern Tibetans as comfortable with their new multi-identities as Gyatso seems to be?

Gyatso’s residency at the Carlos museum included activities related to Buddhist art. The artist set up a mini-studio in which visitors could make clay tsa-tsa’s – tiny Buddhist chortens (like pagodas). When asked whether he felt he was a Buddhist artist, he made clear that like his use of Buddha images, this tsa-tsa project was not intended to be religious in nature. In his artwork, the [Buddhist] tradition has been absorbed into pop culture and lost its sanctity.

It is difficult to tell if Gyatso’s completely disengaged position with respect to traditional Tibetan culture was due to exhaustion over the issues, keeping his art politically ambiguous for the sake of his own desired return to Tibet or resignation to the state of affairs as it actually is. Overarching all of these, however, is the sense (and it is portrayed by Family Portrait) that Gyatso is deeply interested and connected to his fellow Tibetans, in whatever guise they appear.