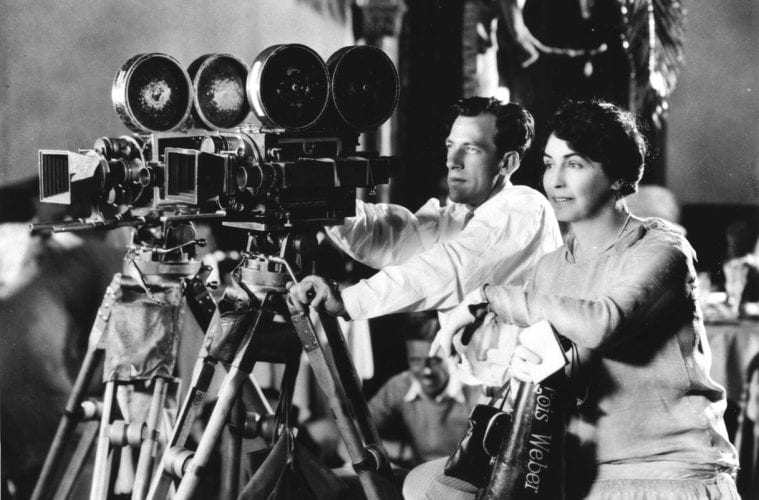 When most people think of film preservation, institutions like the Library of Congress, the George Eastman Museum or the UCLA Film & Television Archive probably come to mind along with director Martin Scorsese’s restoration initiative, The Film Foundation. But less well-known and much more under the radar are the many committed film preservationists who discover, fund and restore important historic cultural artifacts for future generations. Atlantans are privileged to have such a person in their midst, but film preservation is only one aspect of Bret Wood’s list of accomplishments in cinema circles.

Wood, who lives in College Park with his wife and son, is an independent filmmaker with an impressive résumé that began in the mid-Nineties. Currently his filmography includes a documentary, several shorts and three feature films including 2014’s The Unwanted, a contemporary updating of Sheridan Le Fanu’s vampire tale Carmilla. Wood has recently started work on a new feature film and this is consuming most of his free time when he isn’t busy with his day job serving as vice president/executive producer at Kino Lorber, a film/video distribution company in New York City that specializes in classic, independent and international cinema.

The long association between Wood and Kino (the company merged with Lorber Media in 2009) began in 1988 and his responsibilities have grown since he relocated in 1998 to Atlanta where he works out of his home. Although Wood has been active in many of Kino Lorber’s important film restoration efforts of recent years (such as their 2012 restoration of Stanley Kubrick’s Fear and Desire), his biggest venture to date has been the exhaustively researched and lavishly produced five-disc set, Pioneers of African-American Cinema, which was released to great critical acclaim in July 2015. That project marked the first time Wood and Kino Lorber used Kickstarter to help raise funds and awareness for this important addition to American film history. Wood is returning to Kickstarter once again to help support the company’s next archival treasure, Pioneers: First Women Filmmakers. Among the high-profile curators participating in the collection are actress-filmmaker Illeana Douglas and Shelley Stamp, author of Lois Weber in Early Hollywood and Movie-Struck Girls.

In a recent interview with ArtsATL, Wood discussed his multifaceted role at Kino Lorber and some of the challenges of film restoration.

ArtsATL: What exactly does your Kino Lorber title of vice president/executive producer entail?

In terms of an archival project like Pioneers of African-American Cinema I will, in some cases, curate it, select the films, negotiate access to the films with the archive, arrange for the film material to be scanned and oversee the digital restoration, find a composer to provide music if it’s a silent film, synch the score and do all the post-production work and additional features such as getting someone to do a commentary track. ArtsATL: What was the curation process for the African-American Cinema collection?

Wood: I assembled a master list of everything I could find through my archive connections, and then I brought Charles Musser on board from Yale University to curate. He felt we should have a co-curator, so he brought on Jacqueline Najuma Stewart from the University of Chicago. They took my master list, marked the things we must include and also saw holes and said “you need to go to MoMA and try to get Ten Minutes to Live and make sure we get Veiled Aristocrats from the Eastman Museum.” So I went back out into the field and got the films and that’s how it worked.

ArtsATL: What was your favorite discovery in assembling the first Pioneers set?

Wood: The film I was always interested in from the start was Hellbound Train because I like non-theatrical films such as educational or industrial films. Here’s a film that was made for churches by a husband and wife — self-taught filmmakers James and Eloyce Gist. They shot it on 16 mm with their own movie camera and would play it in churches. Eloyce would play the organ while James would deliver a sermon during or after the movie was playing. I love that and the fact that you can retrieve one of these things that’s virtually unseen.

ArtsATL: How did you go about launching the Kickstarter campaign for this collection and what did you learn from that? Wood: A former Kino Lorber employee, George Schmalz, went to work at Kickstarter and said we want to encourage companies to do film restoration projects — would you be interested in doing one? We kicked around a few ideas and Pioneers of African-American Cinema was the one that seemed like it would have the broadest appeal. We needed a lot of money to do a five-disc set so we set our goal for $35,000 and we eventually raised $53,000. In the Kickstarter world you not only want to reach your goal but go beyond it to show there is more energy behind the project than just reaching the finish line. The donations only come through if you reach your goal so you have to be careful about the target you set. You need to plan it all in advance and have certain donors lined up or on standby. You also have to have people committed to plugging your campaign so that every week you’ve got someone sending an e-blast out to the members. You can’t just put it up and expect donations to come in.

And it’s not just about the money. It’s the grassroots support for the project generated by Kickstarter that really put it on the radar and got a lot of press coverage early on. By the time we were ready to do a theatrical release for some of the films people already knew about it and there was a buzz.

ArtsATL: What are your criteria for selecting films in your upcoming Pioneers: First Women Filmmakers?

Wood: The focus will be U.S. films in the silent era. The reason we do that is because there is a story to be told about what happened in early Hollywood. In the film industry’s earliest years there was room for independent filmmakers like Alice Guy-Blaché and Nell Shipman. Just about anyone with a camera could make a film and market it and release it, so it was very democratic and inclusive. But once it became an industry with corporate culture and trade unions and the like, women and minorities got pushed out. It became mostly a white male industry and women were relegated to support roles. After the mid-20s, when a woman directs it’s a novelty and she’s expected to direct movies about womanhood and similar subjects. There is a pretty cohesive arc to the whole history and I want Pioneers: First Women Filmmakers to tell this story. ArtsATL: Do you have any details about the Kickstarter campaign for this new Pioneers set which launched this week?

Wood: We set our goal for $44,000 and hopefully move beyond that. One of our partners in this project is New York Women in Film & Television and they have a women’s film preservation fund. If we hit our goal we’re going to contribute a portion of the money to pay for the photochemical preservation of a film that’s on their preservation list. So people who donate to our fund are getting two bangs for their buck — you’re supporting our preservation work and some of that money goes to other film preservation archives.

ArtsATL: What are some other Kino Lorber projects you are overseeing which aren’t archival efforts?

One really cool thing coming up is Deluge, the 1933 disaster film. [Film preservationist] Serge Bromberg found it through the Library of Congress. He obtained the physical elements — a nitrate negative with the English soundtrack. It’s an American film but all that existed was an Italian dubbed 16 mm print and that’s the only way you could see it. He found the 35 mm negative with the English track and apparently the French track as well. The destruction scenes are amazing. I tracked down a cutting continuity script that provides us the text of the missing titles (including an apocalyptic biblical quote), so we’re in the process of recreating the lost titles.