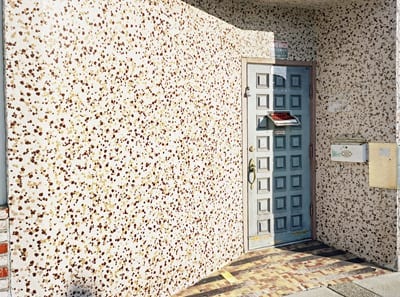 Architecture’s dramatic, but also risible, properties make up the heart and soul of the Hagedorn Foundation Gallery’s double whammy of shows, from Atlanta-based Katie Bollman Walker and Brooklyn-based John Lehr, through February 28. (Poor Tobia Makover’s ghostly, encaustic-caked images are relegated to the “Rebecca” gothic attic on the gallery’s third floor.) 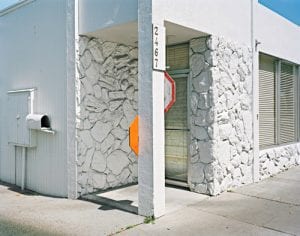 If Ralph Lauren is ever in need of a photographer who can make the American heartland look dramatic, sexy and iconic as all get-out, he should look up Walker’s images of farms whose blank white barns and hulking silos are so stark and graphic that they resemble James Casebere’s cardboard constructions. 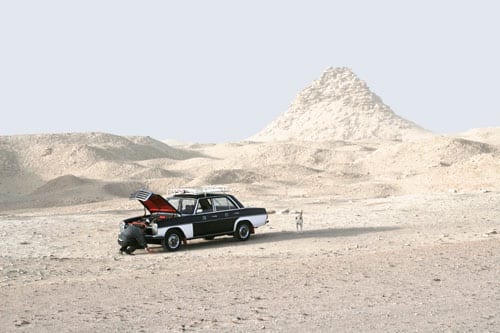 Though her work apparently often takes architecture as its focus, this particular show feels like a grab bag of the photographer’s various interests: locating small human figures against large physical expanses, for one. In the Richard Misrach-evocative image “Contemplating Navel,” a couple dwarfed by the sea and sand around them are flanked by a pit in the sand. In the equally wink-wink, nudge-nudge “In the Hood” (at right), a man in the middle of a chalk-white desert is at work on his broken-down car, his head buried in its interior.

For locals, Walker’s portraits of a cross-section of a demolished Atlanta hospital, in “Cube 2 Pink” and “Cube 1 Original,” may be the most interesting images here. They imagine the city as a bombed-out zone evocative of Gaza, though here it is development, not war, that reduces our landscape to rubble.

Far more satisfying, for its evocation of a theme and a much tighter focus, is John Lehr’s work on the gallery’s second floor. “Gibberish” is a humorous deconstruction, in Madison Avenue’s own blazing look-at-me color scheme, of how signage and architecture illuminate human folly. For Americans used to living in a bleating, noxious universe of slicker-than-slick media images, the abject failure that Lehr documents — or wills into being via his well-placed camera — is a distinct pleasure. 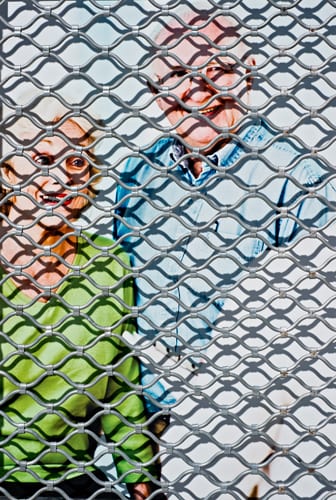 Nothing thrills Lehr like an image of a juicy hamburger that has crumpled, like a used tissue, into an abstraction, or an image of a grinning white-haired couple, advertising blissed-out old age, that Lehr shoots through a metal gate (at left), suddenly warping the beaming oldsters into nursing home caged animals. In Lehr’s photos, warning signs are tacked up to face the wrong way, black garbage bags are improvised to hide irrelevant signage, and some yahoo has undertaken a misguided neon-orange paint job on his home, improvising a plastic tarpaulin on a neighboring shrub to protect it from daddy’s overzealous spray.

Lehr is in a mocking mood, but it’s also quite possible to see poignancy in these images, of mom-and-pop businesses and cash-strapped homeowners doing the best (and worst) they can with the tools at their disposal.