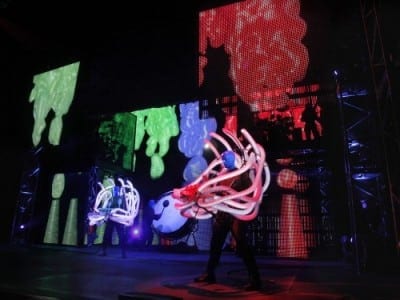 Blue Man Group is the perfect example of how culture frequently operates these days. It started in the early 1990s as a freaky vaudeville-on-acid performance art group off-Broadway: three bald men in matching black clothes, their heads and hands painted cobalt blue, banging drums, flinging paint, eating Twinkies and interacting with the audience.

Twenty years and a whole bunch of “Tonight Show” and YouTube appearances later, they’ve expanded to nine groups, touring and performing permanent shows in places like Las Vegas, not unlike Cirque du Soleil. But they haven’t compromised; the mainstream has just become more willing to embrace their lovable weirdness.

Blue Man Group is back at Atlanta’s Fox Theatre January 18-23, for the first time in years. I spoke with Artistic Director Michael Quinn, who’s never been Blue himself but has been part of the creative team since the beginning.

Phil Kloer: Did you guys ever envision when you started that you would have such massive mainstream appeal? At first you probably seemed like an acquired taste.

Michael Quinn: Of course not. How could you? We were all running away with the circus. We were all earning pennies, less than off-Broadway scale, but the feeling was, wow, we’re getting paid to do some really wacko shit, and we’re getting paid just enough to have a roof over our heads and eat. I can remember all of us sitting around daydreaming about what it would be like when Blue Man was a success, and — I’m not kidding you — the big goal was when we all work past midnight, we can afford to take taxis home rather than the subway.

Kloer: Since the Blue Men don’t speak, I imagine writing for them must be a somewhat different approach than usual. What’s involved with writing a new piece of material? 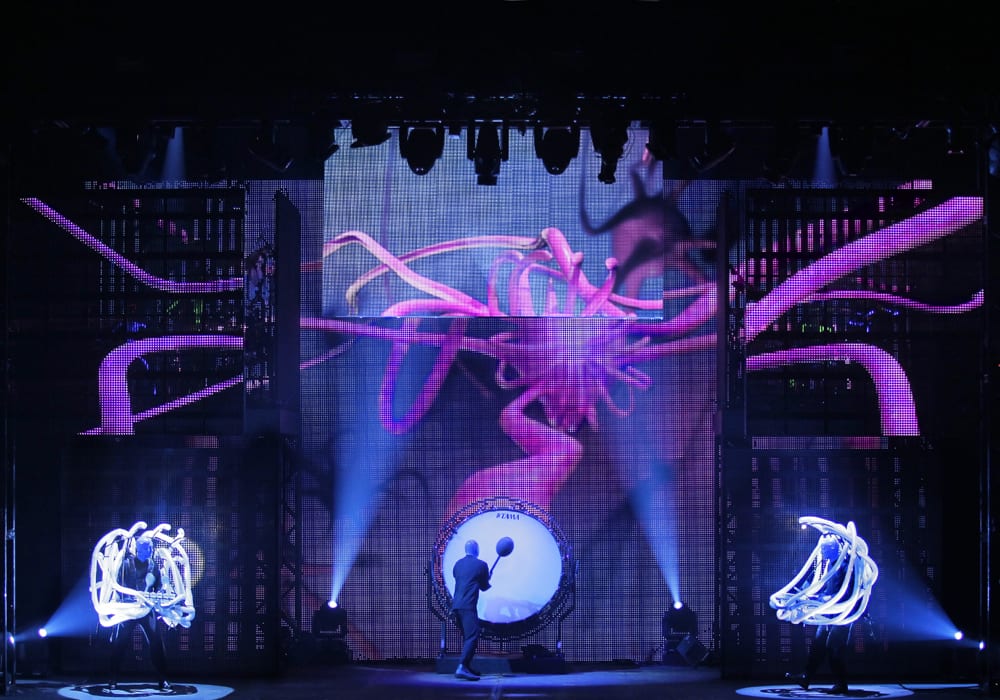 The main thing is how the process is extraordinarily iterative. By the time an audience sees it, you’re on the eighth or ninth draft. So when you see the show with them throwing stuff and catching stuff in their mouths and making art out of it, you don’t sit down and write something like that. Instead, I have this idea of spitting paint on a canvas and making fun of Abstract Expressionism. So you do that and say that’s kind of lame, what else can we do? Well, let’s have them play drums behind it. That’s better. What else? What if one guy throws it and the other guy catches it in his mouth? You have all these layers that seem really complex and dense. 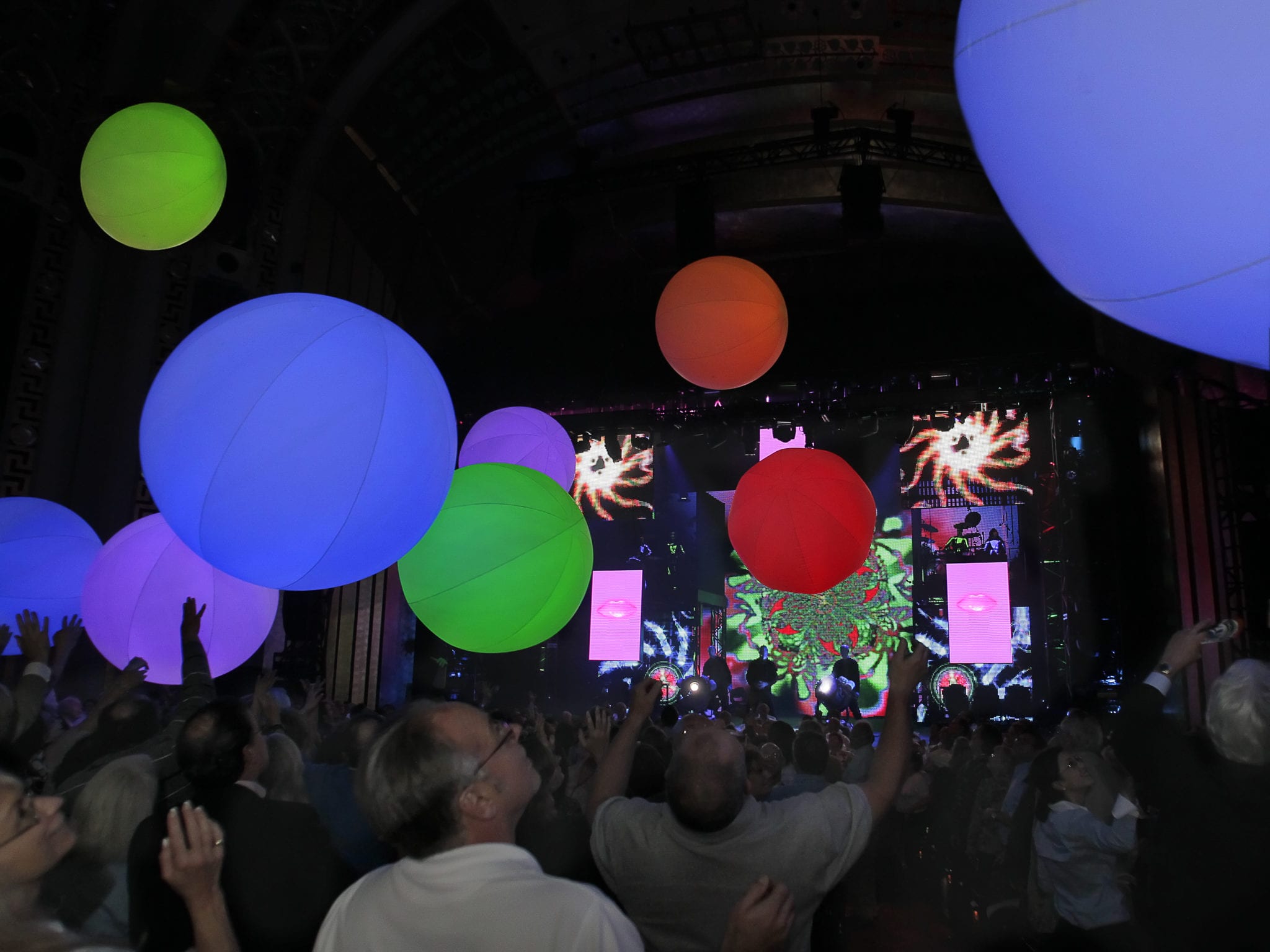 Kloer: How tightly scripted are the shows? Clearly the audience participation bits have to be improvised, but are other parts improvised?

Quinn: It is and it isn’t. The show is pretty scripted because of the technology involved. We have video cues that are timed to the music on a very specific 16th note. But a Blue Man might go out in the audience and stay for four extra measures. So we can’t lock everything into place.

Also, the audience has way more control over the show than they realize. What the audience does affects what the Blue Men do. They will perform a different show depending on whether they have a loud audience, a quiet audience, a really interactive audience, whether there are kids. We’re watching and listening to the audience and picking up cues from them.

Kloer: How much of this tour is new material?

Quinn: Probably about 30 or 40 percent. The whole thing has been rethought, even the “greatest hits” that we can’t get away without performing — I feel like Led Zeppelin must feel: Oh my God, we have to play “Stairway to Heaven” again. There are certain things … if we don’t do the throwing-and-catching thing, people write us letters.

Kloer: What pieces do you have to do?

Quinn: Throwing and catching the gumballs and marshmallows. People have to see paint on drums at some point or they will be outraged. They want to see a PVC number [using PVC pipes as musical instruments]. And they want to see the bit where we bring a woman up on stage. For an improvisational bit, 20 years later, that piece is one of the most demanded.

Kloer: Your website says your shows vary based on the cultural aspects of the community you would like to explore. Does that mean there will be Atlanta-specific aspects of the shows at the Fox, and if so, have you figured out yet what they will be?

Quinn: Wow. Who wrote that? I haven’t heard that phrase. We always try to do something. The Blue Men right there will be the ones to decide. But we try to make it seem like we know where we are. When the show was in Houston, the Blue Men played the opening notes of “Deep in the Heart of Texas,” and the whole crowd went clap, clap, clap, clap and sang “Deep in the Heart of Texas”! And when we were in Arkansas, they led the crowd in a hog-calling cheer. But I don’t know what’s in store.

Kloer: And is the collective plural Blue Man Groups or Blue Men Group? 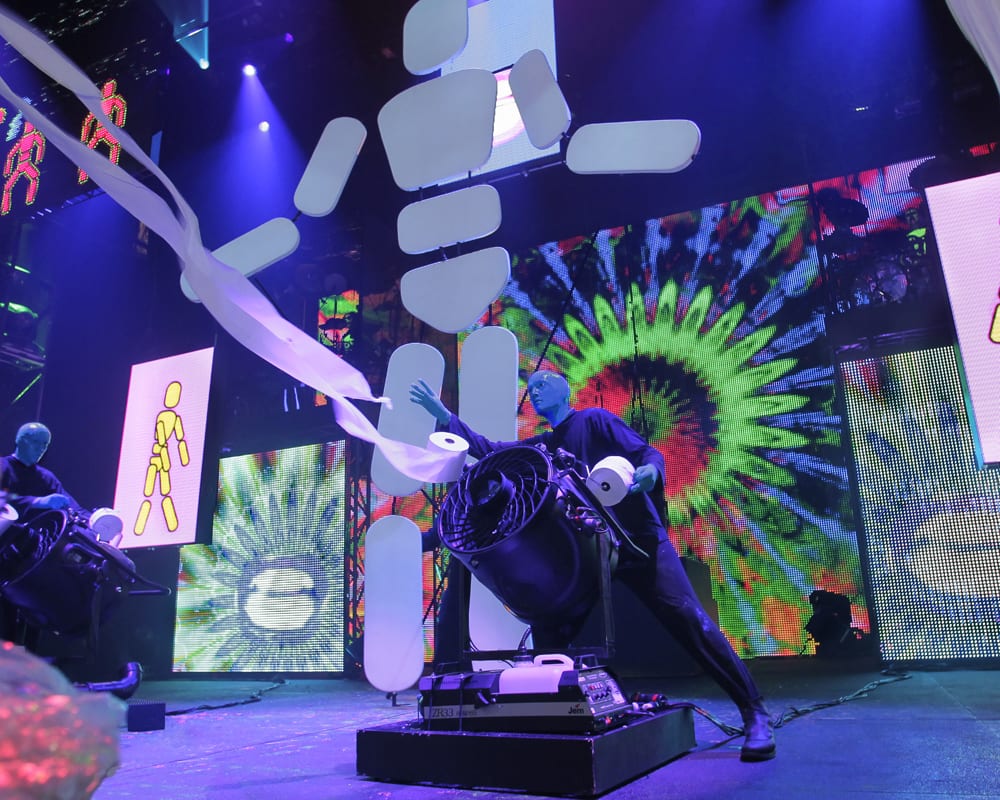