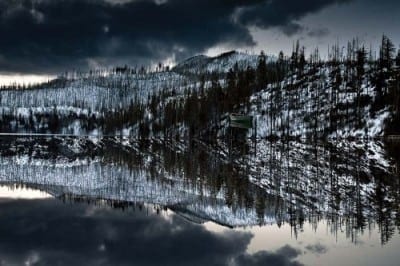 Sometimes art is simply an object on a wall, beguiling for its aesthetic or intellectual properties but undeniably inert and aloof. And some work has the immersive properties of moviemaking: you enter willingly into the world the artist has conjured up, eager to be enchanted. Wendy Given’s solo exhibition at Whitespace gallery, “Turn Your Back to the Forest, Your Front to Me,” through February 26, fits into the latter category.

A fugue on creepy ancient folklores, the forest and furry-and-feathered creatures with a sentient gleam in their eyes, it suggests Lars Von Trier’s “Antichrist” meets “The Fantastic Mr. Fox.” It’s a mix of the adorable and the terrifying. If taxidermied mice and sparrows, albino crows, dead rabbits and mushrooms preserved in resin sound like a recipe for a good time, this is the show for you. 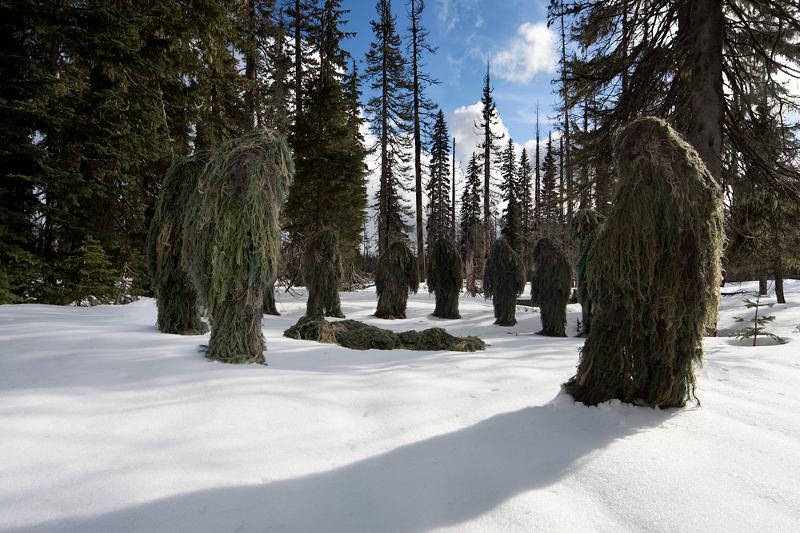 Given’s work draws from her Caldera residency in the back country of Sisters, Oregon, on Blue Lake in the Cascade Mountains, and from an interest in Germanic and Slavic folklore stoked by that proximity to nature. The kind of stories she is drawn to center on stooped old crones who live in the woods and have the nasty habit of eating children. Her stomping ground is nature, that enchanted but also scary place where trees can look like people and a lake becomes a mirror, a doppelganger of the visible world turned back on itself. In Given’s photographs, witches race through the forest toting archetypal brooms, a sinister orange moon hangs over the tree line like a keyhole to another world, and stars — or fairies — shimmer from the depth of an evergreen grove, a magical effect achieved with tiny rhinestones affixed to the photograph’s surface.

In “By the Boat of Charon” (at top), a small, empty boat floats on a placid wintry lake, but in the mirror reflection on the water’s surface, the boat has disappeared. The work, with its emphasis on divides between sky and tree line, between the real world and the reflected one, with its dead animals and hypnotic fires, chills in evoking the uncanny barrier that separates the lived and living world from the imagined afterlife. It conjures up nature as a place beyond human dominion — we long to go there, even as we recognize the danger.

“Wake” (shown above), one of the best pieces in the show, pictures a circle of enormous, mossy tree creatures who bow their heads in sorrow over a fallen friend splayed out on the ground. It’s just one of the pieces here — like the photograph of a white raven whose forest lair boasts a pile of bones and a pile of human teeth — that suggest rituals and rites both familiar and strange. It’s Gregory Crewdson with a sense of humor, the Brothers Grimm laced with a contemporary sensibility.

Given’s only real fault is in working so hard to take us to this faraway place that she gilds the lily. Her photographs often brood with an inchoate mystery: why are the trees arranged into teepee-like tripods? What is that strange glow? But some of her sculptures sacrifice mystery for conceptual frippery and overkill. A black wishing well ornamented with Swarovski crystals and placed on a sky-high pedestal is a dramatic set piece but does little to advance the distinct moodiness Given has established.

One piece that manages to bridge that divide, between portentous photograph and fussy sculpture, is a repurposed cuckoo clock that hits just the right note of creepy without getting lost in stagecraft. Instantly summoning up eerie Germanic fairy tales told to cowering children, of dark forests and menacing goblins, the clock is pitch black, flanked by wooden sculptures of a dead bird and a dead rabbit. And inside, if the viewer is willing to move in close, is a tiny tableaux morte, of a dead sparrow slumbering in an impossibly tiny, downy bed, a stack of books on her bedroom floor. The act of peering into the little room and — shock! — catching a glimpse of yourself reflected back in a tiny mirror is as evocative a flashback to the wonder cabinet — and sense of delight and fear — of childhood as any. The scene is sweet and scary: the world it depicts feels as fully formed and vivid as our own, but death is all around. Who knows, the piece suggests, what strange and delightful mysteries lurk at the edges of the familiar and known?