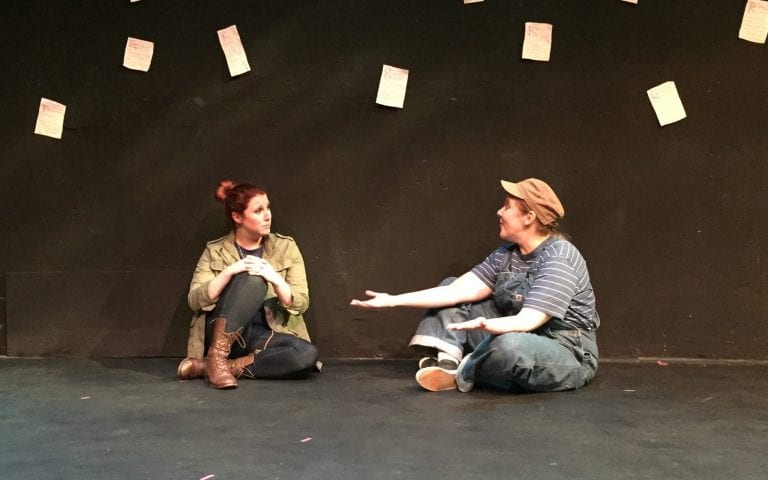 Review: An all-female cast and minimalist set bring new dimension to “As You Like It”

The melancholy character Jaques in his famous “seven stages” speech in As You Like It muses that “a man in his time plays many parts.” It’s a speech that finds a particularly resonant echo in a charming new production at (where else?) 7 Stages Theatre through October 29, a show in which a small cast of seven women perform all 21 roles in Shakespeare’s classic comedy.

Folding Chair Classical Theatre, as the name might suggest, specializes in stripped down, bare-bones productions of classic theatrical works. If the name itself doesn’t clue you in, walking into the performance space certainly will. Seven women of various ages dressed in ordinary street clothes sit in folding chairs arranged in a circle in the 7 Stages small black box space. As the audience files in, the women chat casually, hum along to the strains of an acoustic guitar or occasionally glance through copies of the playscript (you may begin to wonder just how casual the show itself will be). One of the women signals that it’s time to begin and she assigns roles; though the actresses feign unfamiliarity at first, the show gradually picks up pace, the scripts are set aside and what develops is an earnest, well-acted production of As You Like It, one in which the text itself is allowed to take center stage.

The 7 Stages venue, which takes its name from the famous speech, actually has two stages: a mainstage and the smaller back stage, and Folding Chair manages to make that space, which can often seem cramped, appear spacious because they’re working with so little. A rag doll and a child’s toy abacus are among the only props onstage, and I don’t believe anyone ever utilizes the rag doll.

The minimalist approach works especially well in the scenes of the play’s first half, but one begins to feel its limitations in the slower second half. In As You Like It, the Forest of Arden is a timeless, almost eventless place where the boisterous, violently rolling boil of the play’s first half is resolved in a slow-simmering, back-burner sort of way.

There are lots of speeches (including the famous seven stages one) and lots of songs, none of which could be said to truly advance the action. Shakespeare parodies the tropes of the pastoral genre, but it’s a form most modern viewers are barely aware of. We’re given various romantically bumbling shepherds and other rural types, and here the satire is played out by giving the characters hillbilly accents, an approach I’ve seen before. It’s not inappropriate, but once chosen we’re stuck with it, and unlike other elements, it seems glaringly modern and non-textual.

Judy Thomas does a lovely job providing music with acoustic guitar, but in the end there’s not enough texture to the single-instrumented songs to give the late scenes life. For most of the play, less is indeed more, but the songs are a place where more might actually be more.

Still, what’s best in the production is the way the talented cast and director place their trust in Shakespeare himself. Natalie Karp does an especially nice job as Jaques. The character may be afflicted with a recognizably paralyzing and thorny melancholy, but there’s also an admirable unwavering resoluteness to the misanthropy here. When Karp talks about playing many roles, you know she’s really onto something. Stripping away extraneous elements and placing women in the male-dominated play (even the central female character in As You Like It has to disguise herself as a man to get by) brings the text into crystal clear focus. A man in his time may play many parts, but apparently a woman plays even more.