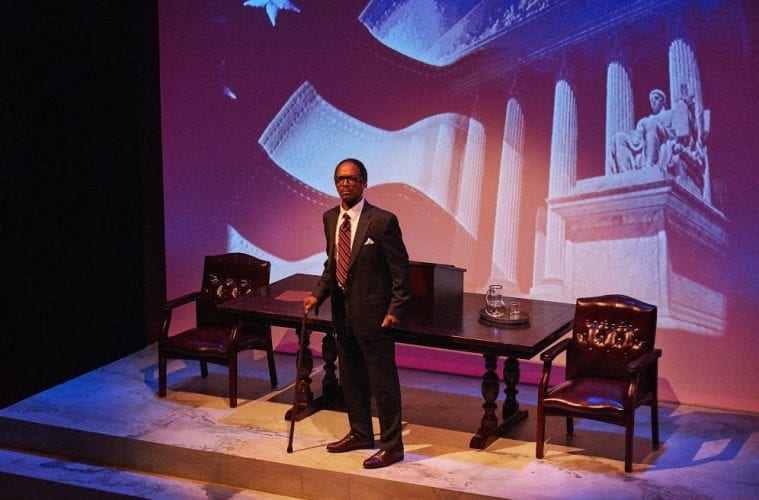 When Thurgood Marshall started studying at Howard University Law School, there were about 160,000 white lawyers in the United States and just over 1,200 African-American ones. In one of his first classes at Howard, his professor, Charles Hamilton Houston, told the class that over half of them would not make it to graduation. Determined not to be in that number, Marshall dedicated himself to the law, spending his afternoons listening to lawyers argue cases before the U.S. Supreme Court.

After graduating from Howard, Marshall spent most of his career as a lawyer for the NAACP fighting against school segregation and unfair sentencing practices in criminal cases involving Black people. He eventually went on to become the first Black U.S. Supreme Court justice, appointed by President Lyndon B. Johnson in 1967.

His work with the NAACP and arguing the landmark Brown v. Board of Education are the focal points of the play Thurgood, written by George Stevens Jr. The play, onstage at Theatrical Outfit through October 16, is a one-man show starring Geoffrey D. Williams and directed by Eric J. Little.

Stevens infuses humor into a script that is packed with historical information about the struggle for school desegregation and biographical details about Marshall’s life. It is a history lesson about the landmark cases that turned education from a privilege into a right. The script reveals some of the contention in the Black community about taking the school cases to the Supreme Court — there was fear that a ruling that upheld separate-but-equal education would set Black people back even further. Stevens is to be lauded for drafting engaging monologues that reveal Marshall’s personality and show his allegiance to his country.

Williams’ performance, however, is shaky. He does a fine job of giving Marshall a distinct walk and guttural voice, but he stumbles over some of the lines. He also struggles to give supporting characters in Marshall’s life enough distinction — all of his depictions of white Southerners are the same. The play also spans some 50 years and the transition from old age to youth and back to old age is not entirely clear in Williams’ performance.

The entire play takes place in a single set that is designed to look like steps leading up to the Supreme Court. Projections and voiceovers are meant to provide some cultural context for the time period, but do not add much. Little’s directorial style for this production comes off as being too minimalistic, especially for a play about such a dynamic figure.

Marshall was born in Baltimore in 1908, the son of a waiter and a teacher. His given name was Thoroughgood after his grandfather, but he shortened it in elementary school. The foundation for his legal career started in detention at his all-Black high school, when his teacher would send him to the furnace room to read the Constitution.

Marshall believed that the law could be used as a weapon for social engineering. The takedown of separate-but-equal played out in the courts, leveraging a law that was intended to oppress people of color. This ideology seems to be lost in modern movements, such as Black Lives Matter, where the law is an enemy to be shunned, rather than as a potential ally.

Today, according to the American Bar Association, of the more than 1.3 million licensed lawyers in the United States, about 65,000 are Black. Marshall served on the Supreme Court for 24 years and passed on January 24, 1993, two years after his retirement. With the 50th anniversary of his historic Supreme Court appointment approaching, and justice on everyone’s minds, now is as good a time as any to revisit the historic cases that he argued. It is difficult to make a one-man show about history both interesting and not boring, and Theatrical Outfit’s production falls just shy of accomplishing both of those things.