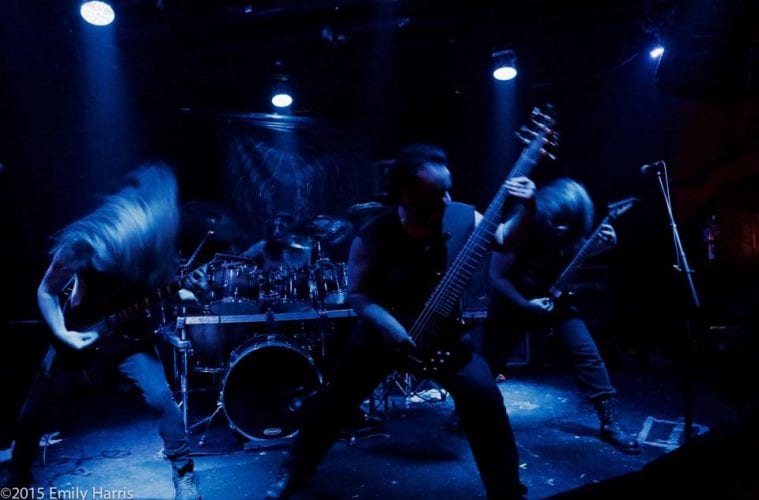 Review: Absu and Vimur remind us that metal should be nerdy

While watching the recent performance of a self-described black metal band — one hailing from a neighboring state, its members clad in the standard-issue outfits of the genre, every tattoo and bullet belt in place — a friend, his arms crossed, leaned to me and said, “I think it’s time to call it. No more new black-metal bands.”

He meant to imply a pretty rich discussion. For the unfamiliar, black metal is a genre label that — when we first encountered the grim stories of core Norwegian participants like Mayhem and Emperor, stories that included murder, suicide, church burnings and even one rumor of cannibalism — began life as a descriptor that was electrifying and scary. As its bleak, melancholy and intentionally lo-fi style was increasingly co-opted by bands outside of Norway, the phrase became contested. Many members of those original Oslo and Bergen scenes were unwilling to share it and claimed the words should only describe what they had made. (This was despite the fact that it was first coined by the English band Venom or that the roots of the style can be traced back to ‘80s-era Swiss and Swedish bands.) Now, however, that mantle is donned by a huge chunk of the emerging class of metal bands around the world, often in conjunction with other styles and modes. The trend is causing weird genre slang like blackened death metal or black ‘n’ roll, and the oddest part is that it has successfully made black metal all the way hip.

What that trend misses, however, is a slew of elements that made black metal a riveting art form in the first place. Grim as they were, those original Norwegian bands were also surprisingly conscious that what they did was an art form, a crafted thing with a particular effect. Perhaps more importantly, it counted as some kind of fringe folk art, made by gloomy weirdos who needed to express something about the cold, dark country they came from. In spite of Norwegian black metal’s sporadic moments of actual brutality, there was plenty of theater involved, too. It was, well, dorky at times — music made by outcasts for their outcast friends — and a far cry from the chisel-chinned metal god thing that certain new bands seem to want to fulfill.

Somehow, the art form came naturally to those Norwegians, and the mood was pretty different than someone simply deciding to adopt the image, especially if that person’s previous work was something as innocuous as, say, pop punk (which was the rumored previous version of the aforementioned live act that sparked these thoughts in the first place). There is some fear that — as my pal’s comment suggests — this trend is sucking the air out of the black-metal room.

Last week at The Basement, that fear was given a short break when Atlanta band Vimur played with Dallas’ Absu. Although Absu classifies itself very specifically as ‘mythological occult metal,’ the band is contemporary with the main part of that Norwegian black metal scene, both in certain shared elements of their sound and in their early ’90s origins. Absu very rarely tours, so it came as a pleasant surprise that they, too, hold fairly goofy theatrics as a component of the live show, with flamboyant singer/drummer Proscriptor McGovern serving as something like emcee or ringmaster, updating the audience between songs with obtuse mythological tidbits in a timbre and lilt that can only be described as part Crypt Keeper, part Gollum. Absu’s dress — with their black stretch pants and leather forearm bracers — had at least as much in common with ‘80s metal as anything, but small touches, like Proscriptor’s fur coats (yes, two of them) and guitar player Vis Crom’s cowboy boots, were just out of place enough to lend a homespun vibe to the theater, and made it all their own.

Before Absu’s pretty riveting set, Vimur — who do identify as a black metal band — made a strong case for there being life yet in the genre. Beyond just having great guitar riffs and impressive vocals, the band possesses something that I can only describe as believability. Clearly, the members — most of whom play in other metal bands, too — are lifelong metal fans who couldn’t be more excited to be playing the music they love. They aren’t trying to be hip, and they aren’t following a trend. One cannot help but root for them. This was the second time I’ve seen Vimur at The Basement this year, and they seem to be among the best metal Atlanta currently has to offer.

If the image you carry in your mind of metal as a musical culture doesn’t include a strong measure of the very nerdy, then you’re working with a flawed model. Sometimes, it’s nice to be reminded that metal exists for unusual people, and that the making of it is better left to the unusual people, too.