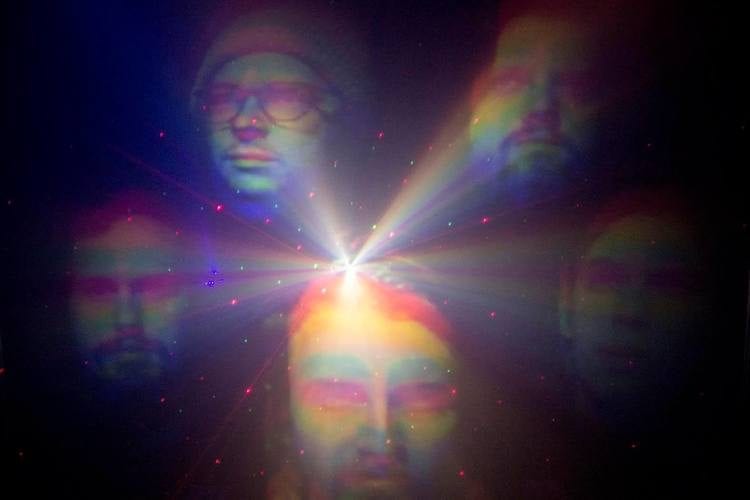 What is psychedelic? What is experimentation in rock music? Are there parameters? And if so, what are they? Some may argue that the parameters have all been effectively, and in some cases exhaustively, covered. All we really know is that psychedelic and experimental music (very different beasts, indeed) are genres that truly found their inception in the 1960s and flourished heavily over the next decade across many different major genres including rock, jazz, rap and pop.

Hello Ocho begins their newest album, In Portuguese, with what appears to be an homage to Miles Davis’ Bitches Brew  or Santana’s Caravanserai. I say ‘truly experimental’ in the sense that it sits on one chord for just over three minutes and psychedelic in the way that it makes one feel.

However, after this prelude ends, Hello Ocho lets you know that they are, in fact, a rock band. Chris Yonker sings emotionally over a slow, heavy groove proclaiming that “we all know that we are slowly dying.” Pretty rock ‘n’ roll, right? Shortly thereafter, we are thrown into something completely different. As sudden the next down beat, a heavily present flat five grits its teeth over our rocking E major groove in a compelling shift to prog rock.

Essentially, it took Hello Ocho just under seven minutes (and again, this is very experimental) to tell its listeners that they are not just pretending to experiment with some chords and weird sounds —they are, in fact, making music that defies boundaries —and not just playing some rockin’ grooves that most people happen to label as “experimental” or “psychedelic.”

The album quickly draws its listeners in with the aforementioned principles of music but also with the presence of steady singing that sounds eerily like Scott McMicken of Dr. Dog at times and Jim James of My Morning Jacket at others. The eponymous “In Portuguese” features some solid drumming that certainly gives its listeners the sense that the song could be in Portuguese for all they know, based on its frenetic drum language.

Each song seems to be a different tale of confusion and a permanent dream state that leaves one with synesthesia, paranoia and a general distaste for reality. What Hello Ocho gives us is much more appealing than reality. They reframe the mundane, like in the song “Lurky Murky,” which says, “what do you mean that your stomach hurts?” —the song transports you past this day-to-day question, making you feel like a stomachache is something as sinister as the sworn enemy of the Galactic Alliance, the Evil Emperor Zurg.

Hello Ocho’s John Gregg and Clinton Callahan provide a very satisfactory rhythmic dynamism that pushes listeners across the entirety of the album. On “Nail Tractor,” John Gregg pushes you as much as you can bear into the second half of the album, with urgent percussion and a blanket of samba-esque drum beats. What is surprisingly just as present throughout In Portuguese is Chris Childs’ performances on the vibraphone. Traditionally a jazz or classical oriented instrumentation, the band prefers to use it in their own unique way, or what they call “Jazz not Jazz.”

The band jams. No one in indie music gets to jam anymore, but in “Irish Wrist Watch,” “Nail Tractor,” “Hallo Gallo,” and “Baker” they take their time developing themes. They take solos. It is amazing. The dudes in Hello Ocho must actually enjoy playing music and because of this, their genre-less (but often cited “psychedelic”) experimental music allows them the freedom to play complex music that has solos. Also, don’t worry, reggae fans—they also tap their reggae vein for a few brief stints, like in the first few moments of “Canadian Sorry,” which opens with offbeat rhythm guitar.

Is Hello Ocho missing any essential components? They have a solid, heavily present rhythm section, tastefully regular solos featuring vibraphone, adept use of samples and studio trickery, experimentation of styles and genres, and very strong vocals and lyrics from Chris Yonker. Oh, that’s it—Chris Yonker. Lest we forget him, he gives us constant electric guitar. Constant in its taste but sweeping in its creativity. Echo, reverb, delay, jazz licks, solos and the like litter the whole album. He even saves some of his best playing for the album’s last track, “Orange Peel.”