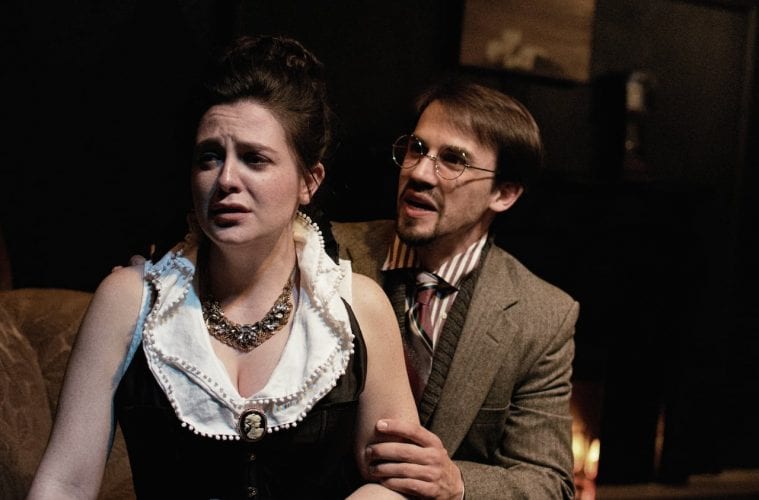 It’s an iconic role that many an actress would love to sink her teeth into. Written by playwright Henrik Ibsen, Hedda Gabler is one of the most significant dramatic characters in all of theater. The drama is not produced with much regularity these days (I honestly can’t remember a major local production since Theatre in the Square produced it with Jessica Phelps West), but The Seedling Project is nonetheless taking a stab at the classic.

Running through April 10 at the Underground Theatre of the Unitarian Universalist Church, this version of the drama (a world premiere) is a production that has some uneasy moments here and there but is nonetheless pretty admirable.

The infamous, unhappy Hedda (Mandi Lee), whose father is an aristocratic general, has just returned from her honeymoon. Her husband George Tesman (Dan Ford) is caring and devoted, but she doesn’t really love him. He doesn’t excite her. When Eilert Løvborg (Josh Brook) a colleague of George’s arrives, things get messy. He is a writer, as well as a former alcoholic, and he and Hedda have been romantically involved. He’s getting back on track now, however, and his new book seems to have the passion that George’s does not. Eventually this all leads to tragedy, as Hedda finds her own life lacking.

Hedda Gabler is anything but an easy play. The queen of pep, Hedda ain’t. It’s hardly a stretch to say that the main character is miserable with her life and her expected role in society. She can be a largely unsympathetic character who does horrible things. What she represents, though, is someone who wants and deserves more. She desires the freedom to be what society doesn’t want her to be.

It’s adapted by actress and playwright Dani Herd, who has trimmed the text down some and made it leaner. She has tried to retain the play’s central themes, including its setting in Norway in the 1890s, but make it more accessible and a little more modern in its language.

(Interestingly the playwright mentions in the program guide that she doesn’t think she would like Hedda as a person, but does find her “brilliant and passionate” and someone who doesn’t need an audience to like her.)

That doesn’t mean, however, that this new adaptation zips by. As directed by Christopher Rushing, the first act is a little stiff and drawn out. The second has more energy and vitality, abetted by some strong acting. Whatever can be said about the work, Hedda Gabler is full of intriguing secondary characters. Betty Mitchell has a few nice moments as Miss Tesman, George’s mother; Spencer Stephens brings dimensions to George’s associate Judge Brack; and Kristin Storla is affecting as Thea, Hedda’s friend.

The best performance, though, may come from Ford as Tesman, who loves Hedda but just doesn’t have what it takes to make her passionate about him.

In the central role, Lee gives the character some individual touches. She’s a solid actress with a comic flair when needed. What she doesn’t have, alas, are the nuances and complexities that the character needs to make an audience look deep inside her. She gives us the requisite outer life but not the inner workings of Hedda. By the end of the play, it’s never clear who this woman is. We know she is unhappy, but not exactly what makes her that way.

Their take of Hedda Gabler doesn’t completely work, or shed innovative light on its central figure, but it’s a sturdy and audacious choice. It’ll be intriguing to see what the company can cook up in the future.