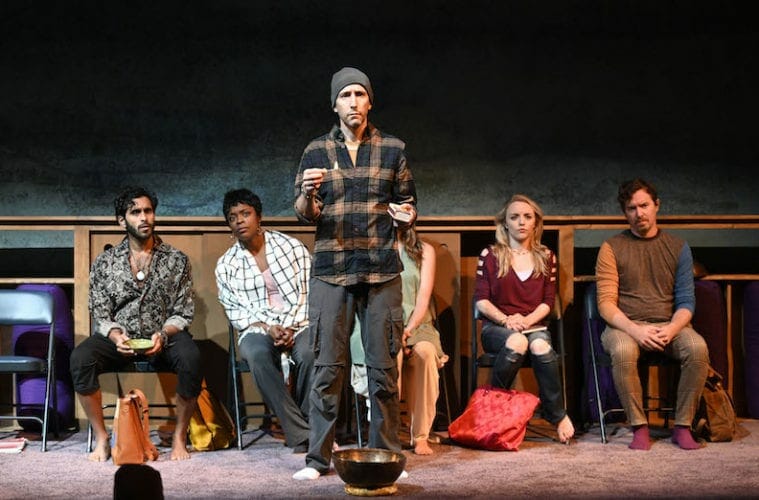 Stripped largely of their ability to communicate with each other via words, the characters in Small Mouth Sounds must find alternate ways to connect. A new production running through October 27 at the Alliance Theatre’s Hertz Stage, the satirical work is blessed with some ingenious ideas but proves more than a little frustrating.

In Bess Wohl’s 2015 play, six characters from the city come to the woods for a five-day retreat, all looking for internal healing. Their teacher has laid out some basic rules in their introductory packets: no smoking, no cell phone use (except in a closed car), no public nudity except at the lake. Talking, too, is restricted. Each day, group members meet, and their leader lays out an agenda to get to the heart of why each of them is here. Ericka Ratcliff (left) and Courtney Patterson as Judy and Joan, a lesbian couple

Small Mouth Sounds has a lot of adoring fans who find it hip and trendy and a dramatic breath of fresh air. The show left me cold. There’s no denying its intentions, but it feels pretentious. The comedy thinks it’s being profound, but it never gets as deep and penetrating as it thinks it does, thus failing to take advantage of its concept.

It lacks characters who can drive the narrative. Except for a few touches here and there, the central six are largely shapeless. Benator has a tricky, darkly humorous speech that he pulls off quite beautifully, with his sad-sack character spilling his guts almost matter-of-factly about the tragedies in his life. His is the character that stands out from the pack.

Patterson and Ratcliff, as the lesbian couple Joan and Judy, also provide some juice, especially when they face a health issue. The rest lack layers. Ficken’s Alicia, for instance, constantly seems to run late, live on her cell phone and have romantic problems. That’s it for character definition.

The wall in the Hertz lobby has “meet the characters” signage that gives more detail about the characters than the play does. Wohl leaves a lot to her audience. The funniest aspect of Small Mouth Sounds is the unseen Teacher, voiced drolly by January LaVoy. She has her own problems as she runs her attendees through the proceedings, spouting New Age messages pretty freely. In a play about silent moments, she does most of the talking, much of it extraneous.

Directed by Susan V. Booth, the setup is all believable, and the cast makes the most of what it’s been given to work with. Scenic designer Leslie M. Taylor works ably with lighting/projection designer Lacey Erb to create a vivid environment. As the show opens, for example, rain is pouring down on all sides as Aggers’ character sits alone in silence.

Small Mouth Sounds runs 80 minutes, and, at times, its dialogue is almost nonexistent — to mixed effect. Two characters bond silently (and memorably) over a joint, but much of what goes on isn’t all that revelatory.

The Alliance staging finds a bit of dark humor as well as a few affecting moments between characters. To the playwright’s credit, Small Mouth Sounds deals with issues such as spirituality, the power of healing and connecting with others in a fresh manner. This is a smart, ambitious idea, but for all its hype, Small Mouth Sounds is mostly a whisper.