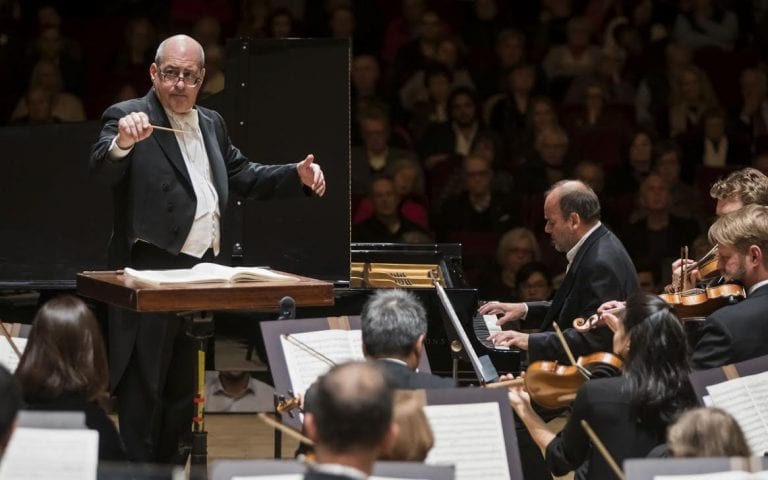 The orchestra seemed to feed off the energy of Spano's return to Symphony Hall. (Photo by Raftermen)

Robert Spano returned to the podium Thursday night at Symphony Hall following a six-week absence as he went to New York City for an ultimate prestige gig: conducting the Metropolitan Opera.

Spano’s return to the Atlanta Symphony Orchestra included a perennial favorite romantic concerto and a revisited contemporary work, and featured French-Canadian pianist Louis Lortie as guest soloist. The program will be repeated Saturday night at 8 p.m. with the added treat of a preconcert recital at 6:45 p.m. by students from the ASO’s Talent Development Program.

Spano’s last appearance conducting the ASO was the orchestra’s season-opening concerts in late September, his absence since due to his triumphal, late-career conducting debut at New York City’s esteemed Metropolitan Opera, leading that company in the American premiere of Marnie by Nico Muhly. The final performance at the Met took place last Saturday, after which Spano flew back to Atlanta to begin rehearsals for this week’s concerts. Back at home, Spano seemed on a personal creative high throughout Thursday’s performance, and the orchestra followed suit.

Up first was a contemporary work by Christopher Theofanidis that was commissioned by Spano. The piece — Symphony No. 1 — premiered in 2009 and then was recorded for the orchestra’s ASO Media label. Theofanidis is one of Spano’s original “Atlanta School of Composers” group that he has championed over the course of his tenure as ASO music director.

Now simply called “Symphony” in the program book and the composer’s website (absent the “No. 1” addendum for unstated reasons), it is best described as a work of modernist musical language and romantic gesture, ever reaching for “the big statement” in the course of its 35-minute duration. Earnest in its quest to express itself on a large orchestral canvas, the work’s colorful orchestration leans toward the grandiose, including an abundance of percussion. In this way, it is less like Mahler than the energy of Hollywood score climaxes (in the best sense) but in a more persistent way.

There is clearly much credible craftsmanship in this work, although the first three of its four movements ended in such an unexpectedly abrupt way that one might wish only a breath between them instead of the much longer pauses and resettling of the orchestra that Spano gave them — although the longest, after the first movement, is easily forgiven as a time to allow latecomers to be seated.

It just seems that, ideally, the greater feeling of contiguousness from one to the next would be advantageous to the piece. Despite what seems its attempt to jam everything but the kitchen sink into one symphony, its still stands well enough within the body of Theofanidis’ other works such as the evocative “Rainbow Body” and the remarkable choral-orchestral “Creation/Creator,” both of which have also been recorded by Spano and the ASO forces, the latter also commissioned and premiered by them.

On the flip side of the program, after intermission, pianist Louis Lortie joined Spano and the orchestra as soloist in a work that is immensely popular within the orchestral canon, so much that its opening is still instantly recognizable within the frame of American pop culture as representing mainstream serious classical music: Pyotr Ilyich Tchaikovsky’s Piano Concerto No. 1.

Lortie last appeared with the ASO in 2016, playing another work of that iconic stature, Edvard Grieg’s Piano Concerto in A minor, again with Spano at the helm. The average older person on the street will recognize the “main theme” from either one instantly, even if they don’t know the title or composer.

Like the Theofanidis symphony in the first half, Lortie, Spano and the ASO brought forth a candidly extroverted performance of Tchaikovsky’s warmly romantic, big-handed concerto, full-bodied and impassioned in its expression, though it is so overly familiar a work, it is easy for an orchestra to just phone it in. That wasn’t the case, and the audience got what it came for: a highly energized rendition of a favorite work to warm the spirits on an otherwise cold Atlanta night.