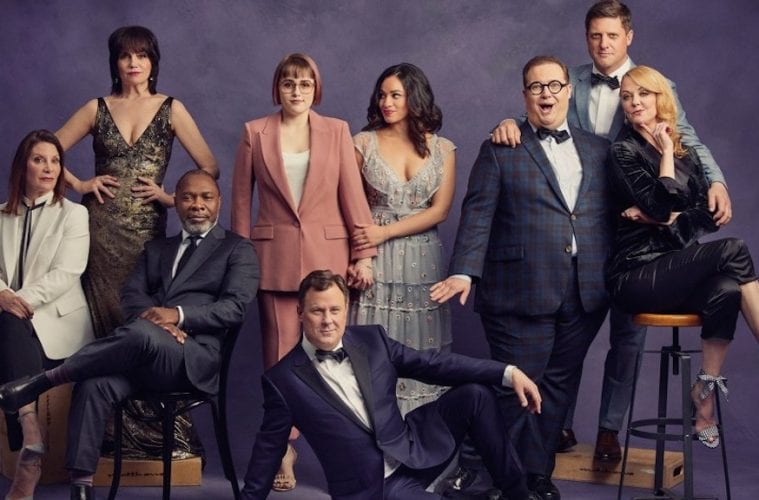 Her long career has taken her on the road as Christine in a touring version of Ken Hill’s Phantom of the Opera for three years, to Off-Broadway gigs, to regional theaters across the country and to venues all over the Atlanta area. Yet there’s one place Courtenay Collins has never appeared until now — the hallowed ground known as Broadway.

Proudly crossing that accomplishment off her bucket list, the actress is currently starring in director Casey Nicholaw’s musical The Prom, which officially opened at the Longacre Theatre in New York on Thursday.

Winding up on Broadway is still a bit surreal for the performer. “It’s been a whirlwind,” Collins says. “I am still pinching myself. Casey called us all onstage before the dress rehearsal, and it was like being invited into a club I always wanted to be in. The rest of the night, though, felt like a normal show. Maybe 20 or 30 years ago I would have been more nervous, but I have a lot of years under my belt and was glad to be relaxed.”

A world premiere at the Alliance Theatre in 2016, The Prom follows the chaos that ensues when a teenage girl in small-town Indiana decides to take her closeted girlfriend to her school’s prom. The prom is eventually canceled, and several actors descend on the area to lend their support — and boost their sagging profiles. Collins — who was the only Atlanta performer in the original show — plays Mrs. Greene, the leader of the local PTA and mother of the girlfriend.

The musical was originally projected to open in New York in 2017, but Nicholaw was busy with another high-profile production — his acclaimed musical Mean Girls. The Broadway version uses most of the same cast and crew from Atlanta — and they knew during the latter stages of the local run that Broadway producers were in town eyeing it for New York. “A lot of people wanted to jump on board,” she says.

Collins praises Nicholaw for his devotion to the Atlanta cast and willingness to bring them back aboard. “He is loyal to his actors,” she says. “When he found out it would probably be a two-year window before the show happened, some of the younger cast members were starting out and needed [work], and he cast a lot of them as dancers in his Mean Girls and Aladdin.”

Collins says the show is less focused on being musical theater and more intent on telling its story.

“The coming together of the two has always been what Casey is shooting for, trying to mold the two,” she says. “I think what we have found in previews is how to marry the two. I think the larger-than-life musical theater folks have heart now. You are pulling for everyone.” Collin’s character of Mrs. Greene, as well, is written much differently now than it was in Atlanta. She laughingly calls her old version the Wicked Witch of the West. “Mrs. Greene is the antagonist, one I think is hard to understand, but they have made her more human,” she says. “She’s a mother living in a small town, and we’re all just the product of our environment. She is struggling with a daughter not being a miniature copy of herself and dealing with her own issues of coming of age. I love my character even more now and understand her. There is also more time onstage between her and her daughter.”

Born in Sandy Springs, Collins attended Julliard and graduated in 1992, opting to stay in New York. She stayed busy in “everything but Broadway,” she quips, including roles in Beauty and the Beast and Grease. One early gig was an Off-Broadway musical version of Eating Raoul, based on the Paul Bartel cult film. “It was supposed to be a smash hit but was a dismal failure,” she laughs. “It was a lot of fun, though.”

After getting married, she eventually relocated to Atlanta in 2003. It took her a while to find her footing. “When I came here, I couldn’t really connect to doing six to eight weeks in a show, so I started doing Libby’s Cabaret,” she says. “Robert Ray got me in and introduced me to Libby Whittemore. I started creating cabaret shows, and I reconnected with my theater friends and artists.”

From there, her career leapt into overdrive. She starred in Evita at Atlanta Lyric Theatre and was seen in two versions of Jacques Brel is Alive and Well and Living in Paris at the Alliance Theatre. Other credits include Hello Dolly! and Calendar Girls at Georgia Ensemble Theatre and three Janece Shaffer shows, most recently The Geller Girls, which won her a Suzi Bass Award.

One of her most pleasurable outings was her own Courtenay’s Cabaret: Home for the Holidays at the Alliance. The performer has also released four CDs, including ones with Broadway and Christmas themes.

In January of this year the cast did a four-week lab in New York. Collins popped back up in Atlanta a few times for publicity purposes, packed up and brought her suitcases to New York in September. Her first day of rehearsals was — fittingly — on her birthday. She’s hoping her stay back in New York will be a lengthy one. “It’s an open-ended run,” she says. “God willing and the Creeks don’t rise, we’ll be here a while,” she laughs.