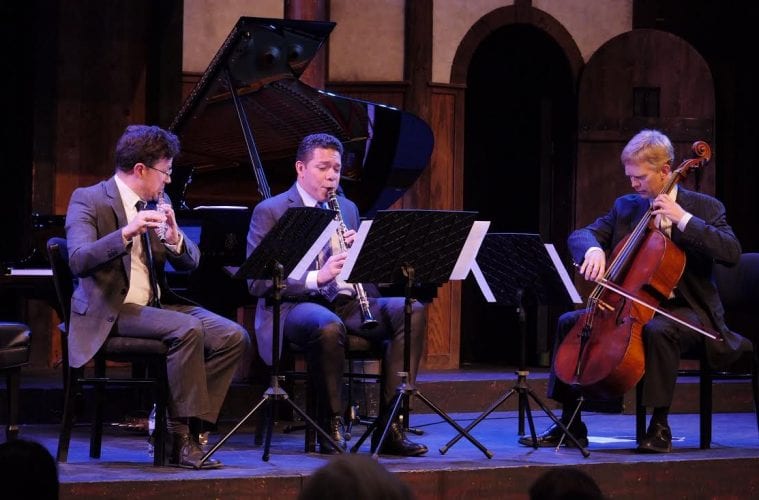 Tuesday’s gloomy, cold and rainy evening was brightened considerably thanks to a concert by the Atlanta Chamber Players that featured three brand new works for mixed trio in a competitive performance, plus a pair of well-established chamber works for winds and piano. The performance took place at one of the group’s favorite haunts, the Shakespeare Tavern Playhouse.

The program opened with some buoyant French music, the Trio for Oboe, Bassoon and Piano (1926) by Francis Poulenc. Oboist Elizabeth Koch Tiscione, bassoonist Andrew Brady and pianist Elizabeth Pridgen performed the delightful piece, which consisted of two faster, spunky outer movements on either side of the mellower, lyrical “Andante” in the middle. The players exhibited great technical facility, clarity and lightness in their performance, setting a positive, expectant tone for the balance of the concert.

The centerpiece of Tuesday’s concert was the southeast regional semi-finals of the Rapido! Composition Contest, in its fifth iteration this season. There were 124 who entered the contest nationwide this year, 31 of them from the southeast region. The Rapido! competition’s challenge is to compose a new, short piece of chamber music in just 14 days. This year’s criteria involved writing music for a trio of flute, clarinet and cello related to the theme of dance.

The first phase of the Rapido! Competition was divided into four regions. The three composers selected as semi-finalists for the southeast region were Badie Khaleghian, Ben Robichaux and Mason Johnston. Their submitted works were performed by flutist Todd Skitch, clarinetist Alcides Rodriguez and cellist Brad Ritchie.

The three judges for the contest were Michael Kurth, section contrabassist of the Atlanta Symphony Orchestra and composer; Rolando Salazar, associate conductor and chorus master of The Atlanta Opera; and Peter Van Zandt Lane, composer, assistant professor of composition and director of the Dancz Center for New Music at the University of Georgia Hodgson School of Music, who was himself winner of the Rapido! southeast regional semi-finals in 2015.

First up was “Dance When You are Perfectly Free” by Badie Khaleghian of Athens, Georgia. A professor of composition at University of Georgia, the Iranian-born Khaleghian was inspired by the poetry of 13th-century Persian poet, scholar and mystic Jalāl ad-Dīn Muhammad Rūmī (جلال‌الدین محمد رومی‎) and its themes of rhythm, dance and music mixed with philosophy, religion and culture — in particular, Rūmī’s notion of dance as a unique state in which we become “free of anything worldly.” The redolent flavors of Middle-Eastern musical influences could be easily heard amid Khaleghian’s well-crafted, attractive modern score.

Ben Robichaux hails from North Carolina, where he teaches music technology and audio engineering at Elizabeth City State University. He earned his master’s degree in music composition at the University of Georgia in 2016 and is currently a doctoral candidate there. His composition, “Innocent Machine,” was essentially a flighty scherzo with occasional metrical interruptions that helped add a little unexpectedness to what was otherwise the work’s incessant underlying forward motion.

“If A Rubber Ball Could Dance” by Mason Johnston of Atlanta concluded the competitive works for the evening. Johnston, the youngest of the three composers, is currently pursuing a bachelor of music degree at New England Conservatory. The concept for his music was initially inspired by the kinds of dancing Johnston observed at a rock music concert — jumping up and down, headbanging, pushing and crowdsurfing. The “bouncing rubber ball” imagery came to him two days later, and Johnston challenged himself to write variations on a “bouncing” sequence of shrinking meters (progressively fewer number of beats to the bar) and yet “to make it still feel danceable.” In that respect, his music achieved an infectious kind of rhythmic appeal as it progressed.

The judges’ decision was announced at the concert’s end, and it was Johnston’s engaging “If a Rubber Ball Could Dance” that won the day. As the regional semi-final winner, Johnston will advance to compete against three other finalists in the national finals on January 20 in Atlanta, where the judges will be Atlanta Symphony Orchestra music director Robert Spano and composers Michael Gandolfi and Jennifer Higdon.

In between, following an intermission, came another work for winds and piano, Ludwig van Beethoven’s Quintet in E-flat Major, Op. 16, performed by the returning Koch Tiscione, Brady, Rodriguez and Pridgen joined by hornist Susan Welty. An early Beethoven work, much inspired by the styles of Haydn and Mozart, it often sets the piano in opposition to the ensemble of woodwinds, but at other times allows for some intimate linear interaction with them, which was clear to the ear in this performance. The 25-minute piece made for a fun, cheerful way to cap what was an enjoyable evening of music, new and old.