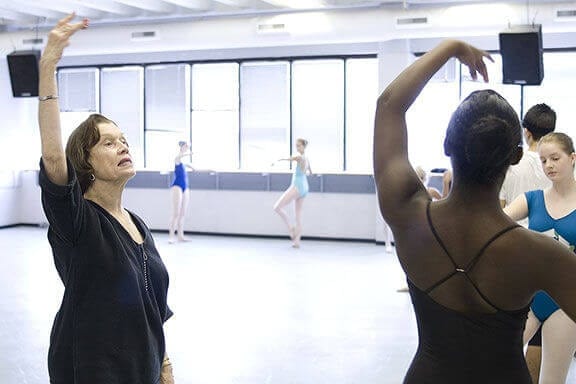 Ruth Mitchell, who studied under Atlanta Ballet founder Dorothy Alexander and later became herself one of the icons of Atlanta dance, died July 18 at the age of 94.

A memorial service will be held Thursday at Saint Dunstan’s Episcopal Church, 4393 Garmon Road Northwest in Atlanta, at 2 p.m. In lieu of flowers, donations can be made to St. Dunstan’s Church or Miles for Cystic Fibrosis.

Mitchell, known to most as “Miss Ruth,” formed the Ruth Mitchell Dance Company in 1958 in Buckhead, and later moved to a studio on the square in Marietta. “Ruth Mitchell believed that Atlanta offered the setting, the culture, the teachers, and the training that would produce major dancers — as, indeed, it has,” said her friend Lane Gormley. “Although she was first trained in ballet, she always wanted to see performances of all kinds — modern, jazz, the many styles of hip hop, Flamenco, and how the young people were dancing in the streets.”

Ashleigh Whitworth, artistic director of the Georgia Metropolitan Dance Theatre (formerly the Ruth Mitchell Dance Theatre), said Mitchell influenced generations of Atlanta dancers. “Ms. Ruth was known for training beautiful, classical ballet dancers, which is why my parents brought me to her school,” said Whitworth, who began her studies with Mitchell in 1994. “She was the quintessential ballet teacher, a tall, stunning woman who always made you stand a little straighter and hold your chin a little higher when you saw her. She was a quiet force, pulling the most out of you with a simple look or a nod — when Ms. Ruth was watching, you danced.”

“Miss Ruth was a combination of southern charm and New York style who cut a striking figure in and out of the studio,” Scott said.

Gormley said Mitchell was devoted to her dancers and students. “It is perhaps true that the most important things about people are the things they love,” she said. “Miss Ruth loved Atlanta, dance, and above all, her beautiful dancers.”

The art form was Mitchell’s life blood. “All I ever wanted to do was dance,” she often told friends.

Ruth Mitchell was born in Social Circle on July 4, 1923. She graduated from Decatur Girl’s High and then the Draughton Business School with a dictation speed of 120 words per minute. But secretarial work was not her future. Mitchell studied with Alexander and Alberta Benham in Atlanta before journeying to New York City in 1942, where she studied under the noted Muriel Stuart at the School of American Ballet.

While in New York, Mitchell began to appear in Broadway shows. Her first was Follow the Girls starring Jackie Gleason; in 1950, she was in the highly successful first run of Annie Get Your Gun that starred Ethel Merman. Mitchell (far right) when she was a student of Dorothy Alexander.

Mitchell returned to Atlanta in 1952, married Claude Kimbrell and had one son, Jeffrey Whatley Kimbrell. She opened her own studio in 1957 and the Ruth Mitchell Dance Company a year later. The troupe toured across the Southeast, doing two Atlanta shows each year. A 1966 review in the Atlanta Journal-Constitution noted that Mitchell’s company “has always emphasized theatrical aspects and dramatic values of its dancing as much as ballet techniques. It tries basically to be good theater.”

She loved jazz dancing, and many of the pieces she choreographed reflected that affinity, along with bridging dance into rock music. Her pieces included interpretations of The Alan Parsons Project’s Tales of Edgar Allen Poe, The Who’s Tommy and Mike Oldfield’s Tubular Bells. Other memorable pieces by Mitchell include Cindy, Archy and Mehitabel, Panopticon and Dark Side of the Moon.

Scott danced in several of Mitchell’s original works. “Miss Ruth was also an excellent choreographer,” he said. “I had the privilege of dancing in several of her works — works as wide ranging as Faces of Eve, based on the bestselling book about multiple personalities, and Annie Mary Church, an affectionate look at a community whose lives revolve around the local church.”

Annie Mary Church — the story of a small country Baptist church in Monroe, Georgia, that was built by Mitchell’s grandfather — was perhaps Mitchell’s signature piece. It was performed in Atlanta and then in New York City. George Balanchine, the father of American ballet, later wrote Mitchell a letter in praise of the work. He then selected her to be one of the teachers for his Ford Foundation-sponsored program to train teachers in his methodology.

It is as a dance teacher that Mitchell made her greatest mark. In addition to her studio, Mitchell also taught at the Atlanta Ballet Centre for Dance Education. She received the Pioneer of Atlanta Dance Award in 2015 from the Modern Atlanta Dance Festival.

Even after her retirement, Mitchell continued to influence new generations of aspiring dancers.

“She was a gifted teacher — knowledgeable, inspirational, strict and very kind,” said Gormley. “Many of her students left Atlanta to dance with major companies. To name only a few, Patricia Bromley of the New York City Ballet, Jennifer Glaze of the Boston Ballet, Maggie Wright of Ballet West and Janie Parker of the Houston Ballet. Janie Parker was also the first American dancer to win a gold medal at the U.S.A. International Ballet Competition. Other Ruth Mitchell alumni founded their own schools and companies both in Atlanta and elsewhere.”

Scott said she emphasized technique. “Miss Ruth was a detailed and patient teacher,” he said. “Under her tutelage and careful eye, I developed a stronger and higher level of dance technique.”

Whitworth studied under Mitchell from 1994 until her retirement in 2000. “As I grew into my adulthood and next chapter of my career in dance, I came to love and respect Ruth Mitchell the person versus “Ms. Ruth” the dance teacher,” Whitworth said. “Later in life I learned she had danced as a modern dancer and on Broadway, which only added to my loving respect for her, and to the overall mystique that was Ms. Ruth.”

In 2014, Whitworth became the company’s third artistic director in its history. “I take great pride in perpetuating Ruth Mitchell’s legacy in the classroom and on stage,” she said. “I teach in the very same classrooms where Ms. Ruth shaped me into a dancer, holding onto the very same ballet barres where my sweat and silent prayers were spent as her student. Ms. Ruth and Ruth Mitchell Dance Theatre are the standard by which I measure myself and the company today.”

She said that some of her most treasured moments with Mitchell came after she was appointed artistic director of the company Mitchell had founded. “Though she was my dance teacher first (and me her student), my last memories of Ms. Ruth are ones through the eyes of me as an adult, holding a conversation woman to woman, retired director to current director, dare I say dancer to dancer,” Whitworth said. “I could see, perhaps for the first time, just how much she loved and cared for me as her student and wanted me to succeed in what I was pursuing.

“As old pictures have circulated since her passing, I am delighted to see her as a young woman surrounded by even younger dancers, leading the way for the next generation of dance. I am happy in the thought that I am following in her graceful footsteps, turned out, feet stretched, chest lifted, chin held high. Thank you, Ms. Ruth.”

(Cynthia Bond Perry and Madeleine Harris contributed to this story.)