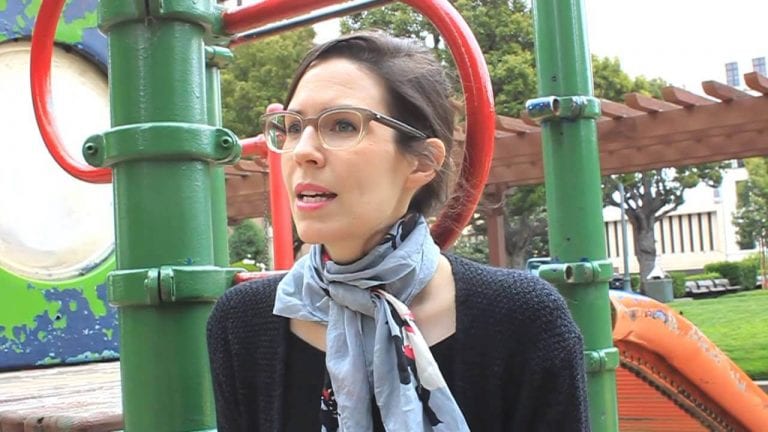 Gunderson grew up in Decatur, graduated from Emory University and now lives in San Francisco with her husband and two children.

Atlanta clearly has a thing for the plays of Lauren Gunderson.

Just ahead, there’s Essential Theatre’s production of her new play about 19th-century mathematician Ada Lovelace, Ada and the Memory Engine, opening Friday with a preview on Thursday. Theatrical Outfit will present the regional premiere of her work, Miss Bennett, an imaginative riff on the middle sister from Jane Austen’s Pride and Prejudice, in December, and Synchronicity Theatre unveils its production of her feminist farce, The Taming, next June. All of this comes on the heels of Aurora Theatre’s recent production of her drama about a bed-ridden teen, I and You, and Emory’s staged reading of her play about the creation of Shakespeare’s First Folio, The Book of Will, last November.

The Revolutionists, her play about an imagined meeting of the minds among revolutionary women, had its regional premiere at 7 Stages in March of 2016, and Theatrical Outfit’s production of her drama about early 20th-century female astronomers, Silent Sky, was selected by ArtsATL as one of the best theatrical productions of 2015. The Atlanta-based women’s theater-group Weird Sisters memorably took on her play Émilie about 18th-century physicist Émilie Du Châtelet in 2013, and Gunderson herself recently came to town to perform in a workshop production of her new play in progress about her family’s history, The Heath.

You might initially guess that this is a case of a city honoring the work of one of its native daughters. Gunderson grew up in Decatur, graduated from Emory and acted and wrote for local companies around town in the late ’90s and early 2000s. But actually, Atlanta is far from unique in its regard for Gunderson’s plays. She is, in fact, the most produced living playwright in the country, and theatrical seasons in many cities across the U.S. look very much like Atlanta’s.

“I realize I’m lucky on a lot of fronts,” says the prolific playwright from her current home in San Francisco. “I really like writing, so I write a lot. That helps.”

Gunderson recently topped the annual list of American Theatre magazine’s ranking of the country’s most-produced playwrights. (She was second only to August Wilson, who is deceased. Shakespeare receives so many productions every year he is no longer included on the list). Her placement there was remarkable for a number of reasons. She’s one of only a handful of women to make the list, and at 35, she is relatively young to appear there.

But Gunderson took the theater world by surprise primarily because she has never had a major production in New York. Typically, living playwrights who appear close to the top of the list are those who have recently won a major prize like the Pulitzer or the Tony for a New York production which is then picked up for multiple smaller productions at regional theaters across the country. Gunderson’s path has been very different.

“Regional theater has shifted from being the receivers of whatever New York has done to the launchpads for a lot of things that come to New York or that influence or that are in conversation with New York,” she says. Gunderson, who initially planned to launch her career in New York after studying playwriting for her MFA at NYU-Tisch, instead ended up moving to San Francisco with her husband, whose career in virology led him to the West Coast.

“I worked with all kinds of different theaters and all different kinds of productions,” she says. “There was one year when I had five or six world premieres. That would never happen in New York, but on the West Coast it did. I think that’s part of it. I’m working on more plays, more premieres, more productions, and then suddenly I’m on that list. I have the opportunity to premiere plays instead of just writing them and hoping someone will read them one day.”

Like many of her plays, her 2015 work Ada and the Memory Engine, which is about to have its regional premiere at Atlanta’s Essential Theatre, deals with a real historical figure, a woman in science. “I’ve always had this interest in the world of science,” Gunderson says. “The progress of human ingenuity and development is highly dramatic, so I keep going back to really essential moments of discovery and creativity that have defined the world as we know it.”

The subject of the play, 19th-century mathematician Ada Lovelace, was the daughter of English poet Lord Byron. “That kind of dichotomy felt really right to talk about the clash and convergence of science and art,” Gunderson says. “She had both. She is this dual spirit.”

The play dramatizes Lovelace’s 30-year relationship with English mathematician and inventor Charles Babbage who originated the concept of the programmable computer. “She was this beautiful young socialite with her father’s reputation hanging around her neck,” says Gunderson. “She meets Babbage, the smartest guy in England, and asks him about his ‘thinking machine.’ Instead of brushing her off, it begins this amazing partnership between them. When she writes the precursor of a code for his machine, they’d been working together for decades . . . It felt like this really beautiful, romantic story that had its heart in this impossible machine that is now in everyone’s pockets.”

The upcoming Essential Theatre production of Ada in Atlanta represents a significant homecoming for the playwright in more ways than one: the company presented the very first production of her very first play.

When Gunderson was still in high school, she began performing small roles at professional theaters around town and eventually wrote her first play, Parts They Call Deep, about three generations of women traveling across the South in a Winnebago.

“I didn’t know: ‘Is this a play? Did I do it right?’” she says. “I had worked with [Essential Theatre Artistic Director] Peter Hardy as an actor the year before, and I sent it to him because he seemed to know what plays are. He read it and said ‘Not only is it a play, but it’s just won our award for Best Play by a Georgia Writer.’ It was a pretty cool way to start my career.”

Hardy said Gunderson’s talent made it easy to be impressed. “It was funny and well-crafted, with characters that were distinct and flavorful and engaging, with dialogue that was entertaining and very playable,” he says. “Our 2001 production of Parts They Call Deep was the most popular and well-attended production we’d had up to that point.”

Gunderson says that production was her launching point. “I really do credit Essential with being the spark of my career,” she says. “It was pretty incredible.” (Also interesting to note is the fact that a supporting role in the Atlanta production of Parts They Call Deep was performed by Topher Payne, now an acclaimed and award-winning Atlanta-based playwright himself).

In the rare moments when she’s not writing plays, Gunderson says she’s focused on raising her young family of two toddlers. The concept of professional playwriting may still be beyond their grasp, but her recent children’s book, Dr. Wonderful and Her Dog Blast Off to the Moon, based on her kids’ play of the same name, has nonetheless been a big hit at home. “The one who’s almost three talks about ‘Mom’s Book,’” she says. “I don’t think he knows that means I wrote it; it’s just called ‘Mom’s Book.’ I did take the older one to a kids’ play for about 20 minutes before he kind of wigged out. We’re working up to theater.”