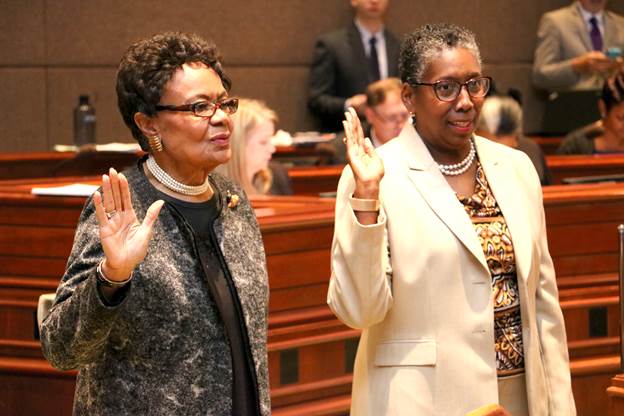 Garner (right) being sworn into office with Commissioner Emma Darnell.

Garner, the first openly gay person elected to the commission, also worked for LGBT rights and on behalf of those with HIV. Her partner, Fulton County State Court Judge Jane Morrison, presided over the first same-sex marriage in the country following the 2015 U.S. Supreme Court decision.

“She was an inspiration to so many,” said Carolyn Carr, who was appointed by Garner to the Fulton County Arts Council. “She was a friend and it was an honor to represent her on the arts council.”

Virginia Hepner, president and CEO of the Woodruff Arts Center, said she joins so many others in Atlanta in mourning the loss. “I had the pleasure of interacting with Joan over many years, especially on creative ways we could bring more arts into the lives of everyone in our community, at every age,” Hepner said. “I just loved her enthusiasm and optimistic attitude about everything — people just wanted to work with her. She will be deeply missed.”

Ann Cramer, who has served on a number of non-profit boards including the Woodruff Arts Center and the Alliance Theatre, said Garner was the epitome of a “gracious and smart” public servant. “She shared an inspiring vision of inclusion, equity and justice,” Cramer said. “She challenged the system with clarity and grace to break thru barriers to achieve her vision. She loved beauty, the arts, and culture and boldly defended funding. Most of all, Joan modeled the way for all of us to live. She listened, she acted — she delivered on her promise every day.”

Garner attended last week’s commission meeting via the phone, and was honored by the commissioners and the state’s Association of County Commissioners, where she served as a vice president. A conference room in Fulton County’s new health building will be named in her honor, and a scholarship for students interested in county government and health and human services has also been established in her memory. 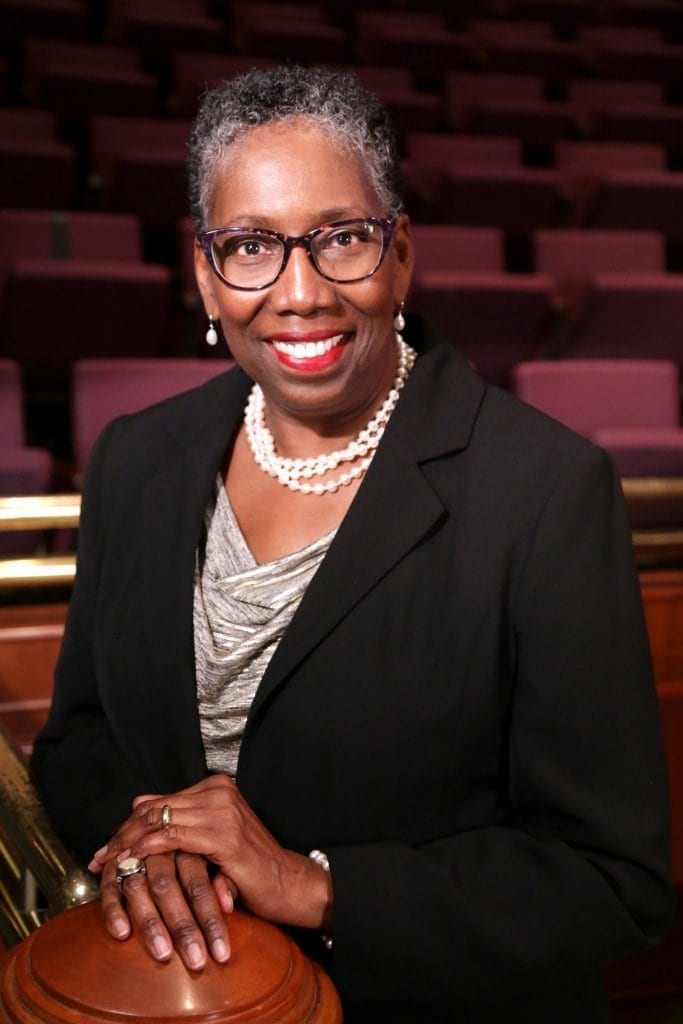 Garner represented District 4, which encompasses Midtown and neighborhoods west of downtown Atlanta to Fulton Industrial Boulevard. Before that, she was a board member of the Fulton County Arts Council from 2006 to 2007.

John Eaves, chair of the Fulton County Commission, said he and his fellow commissioners are “heartbroken” by the loss. “We will miss her thoughtful service, her passion for equity, and, especially, her smile and her warmth,” Eaves said in a statement. “She put her heart and soul into her service to citizens, with a particular focus on health.”

Mayor Kasim Reed called Garner both a friend and a colleague. “This is a terrible loss; we will miss her,” he said in a statement. “Joan was respected by all who had the privilege to work with her. She was a true community leader, fighting for the rights of LGBT women and men, including pushing for domestic partner benefits for City of Atlanta employees. The people of Fulton County have lost a treasured voice, but her impact and legacy will not be forgotten.”

Atlanta City Councilwoman Mary Norwood, who is also running for mayor, issued a statement that noted Garner was “a pioneer” for many causes. “Her passion for public service and dedication to helping the most marginalized in our community will be forever remembered,” Norwood said. “Joan’s family and her wife Jane are in our thoughts and prayers during this difficult time.”

Garner was honored by the Fulton County Task Force on HIV/AIDS last week for her leadership in “creating the task force, supporting the group’s Strategy to End AIDS, and committing to ending the social inequities and injustices, stigma and discrimination that propel the epidemic.”

Jeff Graham, executive director of Georgia Equality, said in a statement that his relationship with Garner went back to the fight to win domestic partner benefits for City of Atlanta employees. “Over the next 25 years, I turned to her often as a colleague, mentor and friend,” Graham said. “Through her nonprofit work, she pushed foundations in Georgia and around the country to fund progressive organizing and LGBT services throughout the South. Her spirit and commitment to the betterment of multiple communities is a small part of the legacy she leaves us.”

Graham said Garner was a “tireless advocate” for the LGBT community in Georgia, and people living with HIV. “The impact she had on our communities is immeasurable and will continue to be felt for years to come,” he said. “Our community has lost a true hero today, but she will not soon be forgotten.”

A native of Washington, D.C., Garner moved to Atlanta in 1978. She had a bachelor of arts degree in English from the University of the District of Columbia and a master’s degree in Organizational Communication from Howard University.

She soon became involved in her new hometown. Garner served on the transition committee for former Mayor Maynard Jackson’s third term in 1990, and also was his senior advisor on gay and lesbian issues. He appointed her to the Atlanta Olympic Citizen’s Advisory Commission in 1992.