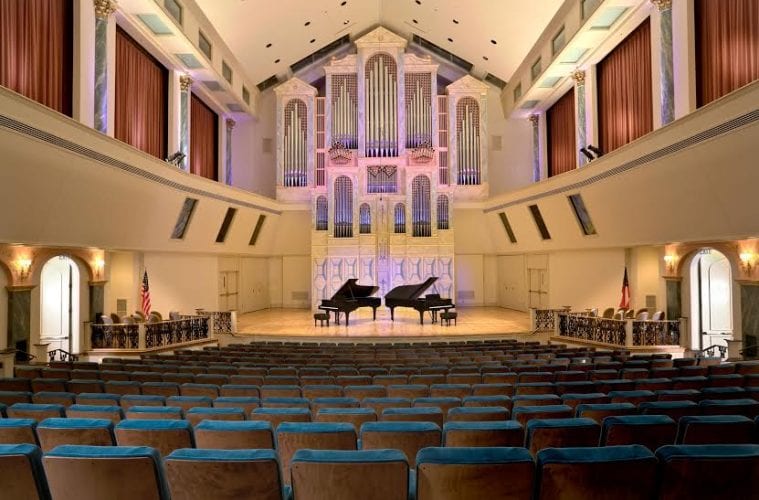 Q&A: Sam Dixon reflects on the richness of Spivey Hall’s legacy as it celebrates its 25th season Spivey enjoys an international reputation for its superb acoustics.

Acoustically superb and renowned for the artistic excellence of its programs, Spivey Hall — the critically acclaimed 392-seat recital hall on the campus of Clayton State University in metro Atlanta’s southern suburbs — is celebrating its 25th anniversary this season. A program of Brahms tonight, with Jennifer Stumm on viola and Roman Rabinovich on piano, will kick off the season.

The hall was the brainchild of Emilie and Walter Spivey, who donated $2.5 million of the $4.5 million in construction costs. Emilie Spivey — who died of cancer in 1988 one month after plans for the hall were finalized — created the vision for the hall as a small and intimate, but acoustically superior, venue.

ArtsATL recently sat down with Dixon for a conversation about Spivey Hall’s past and present, where it has been and where it is now, as it begins its Silver Anniversary season this fall. ArtsATL: Looking back, what is your perspective on the history of Spivey Hall? What insights can you give us about its beginnings?

Samuel C. Dixon: Spivey Hall had the extremely good fortune to be launched by Sherryl Nelson, who was a publicist for the Los Angeles Philharmonic before she went to University of Southern California as a presenter and then came here to open Spivey Hall. Sherryl is the best publicist of the classical music world I’ve ever met. She knew how to create excitement, how to communicate about music, artists and standards, and the importance of quality. She established a profile for Spivey Hall. Within the first three years, it was clear that this is going to be a great place where wonderful artists would continue to be heard, and that it would be a resource for local ensembles and local musicians as well.

Like many in metro Atlanta, I discovered Spivey Hall at the opening gala concerts: Itzhak Perlman, Andre Watts and Samuel Ramey. I was present for the third one, which was fantastic. I was working with the Atlanta Symphony at the time as artistic administrator. I hadn’t lived in Atlanta the entire time, but Sherryl and I kept in touch. She kept me informed of what Spivey Hall was doing.

ArtsATL: Did anyone back then foresee how highly regarded Spivey Hall would become on a national and international scale, or how quickly?

Dixon: When it opened, expectations were high, but no one really knew how wonderful the acoustics would be until performers started playing here. The buzz was good and traveled very quickly in musical circles because musicians at the international level are itinerant. They get around, they talk to each other and their managers talk to each other. Itzhak Perlman loved it, got on the phone and talked to Zubin [Mehta] and Zubin talked to Pinchas [Zukerman], Pinchas talked to Isaac [Stern], and suddenly there was this buzz that there’s this great little recital hall in Atlanta and you sound great there.

Having high aspirations and artistic standards, getting a good footing with that level of quality, has served Spivey Hall well. I’m very proud to say that we have maintained that level of quality over the years with a vast range of performers. When you take a look at [the list], it’s sort of mouth-dropping, all these artists from so many places, many of them coming back multiple times.

Spivey Hall has continued to introduce new artists to Atlanta and the South like Angela Hewitt, Paul Lewis or Bryn Terfel, [who] come to Spivey Hall regularly. So does Joshua Bell. There are some that are very particular in their desire to return to Spivey Hall because they, too, like that sense of intimacy, the fact that the acoustics are so good, that the pianos are so good, and that they can rise to great heights here. Itzhak Perlman was one of the early champions of Spivey Hall.

That’s what Emilie Spivey wanted. She knew artists and knew what they needed, and she created Spivey Hall to accommodate them, which led Robert Shaw to say, “Spivey Hall is to music what light is to painting.”

ArtsATL: You’ve talked so far about what has remained consistent over the years. What major changes has Spivey Hall experienced?

Dixon: One of the big changes that has taken place since the hall first opened was the advent of the Friends of Spivey Hall, which this year we’re renaming the Spivey Hall Friends. The Spivey Hall Friends were created in 2002 because people who came to Spivey Hall kept giving Sherryl Nelson checks, [saying] “We want to support what you’re doing.” We were glad for the support.

In the early days most people thought that the Spivey Foundation and the University took care of all of our needs. They’ve been extraordinarily generous to us and continue to provide really essential operating support. I know in perpetuity there will be programming money from the Spivey Foundation to make a commitment three or four years in advance to a great artist, and that’s invaluable. But the Spivey Hall Friends, in this season, are the primary source of funds for artist fees and I would not have predicted that in 1991. Season 25 has 25 concerts sponsored by Spivey Hall Friends. That sponsorship growth is definitely what has happened under my time here, out of necessity but also out of the maturation of these relationships.

ArtsATL: So this has been a maturing process of the Hall’s place in the community.

Dixon: That’s well put. Interestingly enough, we got a jump on being known outside the community early because the very first concerts were recorded for radio broadcast. Since day one we’ve had a relationship with “Performance Today” [on public radio] and WABE has been one of our major supporters, so we’ve had a radio presence [that] has enabled listeners across the country to discover Spivey Hall.

ArtsATL: Has Spivey Hall, then, become a destination venue for some traveling audiences as well as the performing musicians?

Dixon: We have subscribers in seven states throughout the Southeast and, believe it or not, New Jersey. We still have subscribers in more than 50 counties of Georgia. The notion that you have to get in your car and make Spivey Hall a destination to hear artists you wouldn’t hear anywhere else has been firmly established. When I’m booking, I’m always asking myself, “If I had to drive three-and-a-half hours each direction to hear this concert, will I be amply rewarded?” The opulent interior of Spivey Hall.

I’ll tell you this: We learned that the most active single ticket sales for us [this season] have come from fans of Joshua Bell and Bryn Terfel. A Joshua Bell recital is an event no matter where it is in the world because he consistently delivers immensely exciting and very, very powerful performances. Josh is coming back for his sixth time, and it’s almost sold out. For Bryn, this will be his third visit and he doesn’t come to Atlanta unless he’s coming to Spivey Hall.

Their fans will make special trips to Spivey Hall to hear their favorite artist, meet the artist [and] to hang out with the artist while having their program or CD signed. That sense of personal dimension was everything to Emilie Spivey. She wanted it to be a personal space.

ArtsATL: That’s quite a thing to experience in this age where most people seem to communicate through the impersonal means of social media.

Dixon: As times have changed, and the world has been revolutionized by new electronic technology, it’s so easy now to get very high quality performing arts on demand streamed into your home. That has changed people’s perceptions of why and how often they go out. The notion of how much time we have has changed a great deal in 25 years; expectations about what’s supposed to happen everyday.

It’s supposed to make our lives easier and in some ways it has, but it’s also put more time in front of screens at the forefront of our lives. When I give curtain speeches at concerts, I’m encouraging people to turn off their technology and be here now. It’s a humanizing experience to be enjoying music with other people who love music. The joy, satisfaction and enduring value of that is still here, and we need to make the most of it that we can.