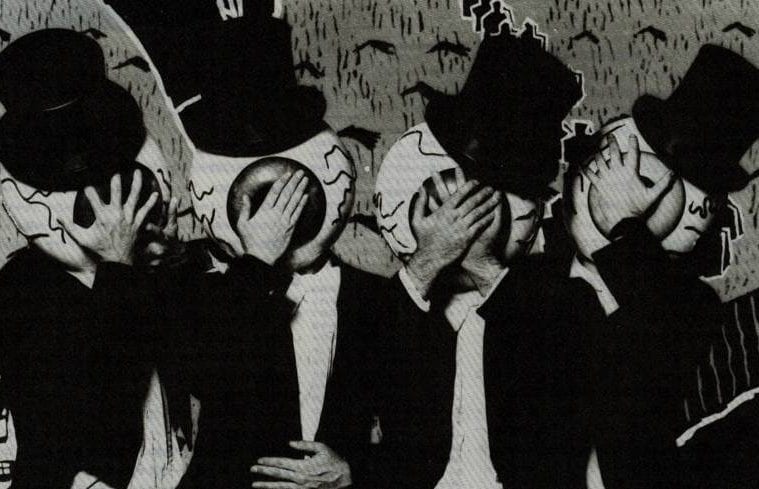 Hardy Fox, cofounding member of avant-garde rockers the Residents, died last month, leaving behind a vast legacy of transcending music experimentation. Formed in 1972 by four unidentified creatives, the band endured for almost five decades to present a paranoid blend of electronic rock. The group amassed a comprehensive cult following; played a major role in the formative stages of the music video, CD-ROM technology and electronic music; and is cited as a major influence for many musicians known worldwide.

Long-time collaborator is vocalist and performance artist Molly Harvey, whose work with the band spans the early ‘90s to mid-2000s, a time in which she contributed to both lead and backing vocals in live performances and in the studio, often in the form of characters within the Residents’ intricate concept albums. Having worked as a performer and visual artist in the Atlanta area since her tenure with the band, Harvey was the ideal person to help ArtsATL memorialize primary composer Fox and was kind enough to provide an intimate look at one of experimental music’s most prominent figures.

ArtsATL: Most of us got to know Fox through his television appearances and biopic the Theory of Obscurity. What was he like as a person off the film set?

Molly Harvey: He was exactly like he seemed to be. He was playful and always had a little smile on his face. He was very childlike in some ways, harnessing the irreverence and curiosity that a child would have. Not to say that he acted child-like; he just had the open and pure qualities children possess. He liked to joke, and he was a good person to talk to about relationships and life. He was very philosophical and a realist in terms of topics like death and sickness. I recall a moment when I was in my early 20s — which would have probably put him in his 50s — that he was talking about getting older and thinking about mortality and other serious life topics. I was young and still thought of death as the enemy. But to Fox, it was just another transformation that’s part of the continuity of life. He wasn’t constantly thinking about death, but he obviously thought about it without being afraid.

ArtsATL: That was very much reflected in the statement he put out shortly before he passed when he said, “Anyway, probably seeing the last of me. Thanks for checking in.”

Harvey: Fox was a very laid-back person in all things. People throw around the word “genius” often, but he was obviously gifted. He was able to wrap his head around almost everything — life and the absurdity of it all, the chaotic nature of things. This was part of his natural personality in combination with growing up in the segregated South before moving to San Francisco and being a hippie. He could reflect on deep topics without seeming like he was pontificating and was interested in exploring topics and gently giving wisdom that was there if you wanted it. He was a really genuine and sweet guy.

ArtsATL: It’s interesting that someone who was so warm and outgoing would be one of the central people in this anonymous, anti-image sort of band that retreats from the limelight.

Harvey: I think a lot of musicians or celebrities that become well-known often become antisocial because everybody around them wants something. It’s this very sort of vampyric existence that I think for the Residents, though they didn’t plan this to be the long-term effect, became a huge benefit because they were able to maintain loving, warm relationships and their own personalities and friendships. You can’t just be Steven Tyler. I don’t know if Aerosmith need personal bodyguards all the time, but they probably live in a house with a gate, and the Residents were able to embrace the world as normal people. I think if anything, as Fox got older — and this is just my own projection being a performer — and began contemplating his own mortality, realized that there is a certain element that goes missing when you’re anonymous: the ability to interact with whose lives you’ve touched. I don’t remember if it was Wormwood or if it was Icky Flix or which tour it was, but he greeted every single person at the door that he could. He didn’t have a sign and at this point it was all sort of still unknown, but so many people had really lovely conversations with him, and that’s a beautiful thing that he was able to do that. Cofounder Hardy Fox is remembered for being exactly who he seemed to be, genuine and possessing a childlike curiosity.

ArtsATL: How did you first meet the Residents?

Harvey: Growing up I never listened to the band, but I knew of the eyeball and top hat. Like we were saying earlier, the image the group portrayed. I moved to San Francisco on the fly because my dad died fairly suddenly, and he was living down in central California. I walked the city in search of work and landed a job at a coffee shop called Elsie’s. On my very first day of work the lead singer of the Residents came in and we started talking. Almost naturally, we just became good friends.

Over many conversations, it came out who the masked singing Resident was. He told me they were making a CD and having people do voice-overs. On this particular day I was seriously jacked up on too much coffee, and I asked if I could have a job helping with the voice-overs. He asked if I could do an old lady voice, which I nailed.

ArtsATL: And that led to your involvement with the band?

Harvey: So they brought me in to record, and I knew Fox from waiting on him at the coffee shop. In my mind I wasn’t a singer at all. I think we all just sort of developed a friendship, and I was there when they needed me. The more they saw of me, the more they saw I had a [good voice]. Then, we recorded the 2006 album Disfigured Night for Marlboro and went to Germany for a one-off televised event, which was a total trip.

I can’t remember which bar we were at, but we were rehearsing for the Germany show, and I recall Fox coming up to me and saying the legendary concert venue Fillmore East had asked the Residents to do a five-night culminating midnight show on Halloween and that I was going to sing. I was hesitant, but that moment really changed my life. If these guys believed I could sing, then I believed it too. When Fox told me I could sing, it helped me remember something about myself and helped me grow in a way that I never would have. He played an incredibly important role in my life, like a fairy godfather almost.

ArtsATL: So, what made you decide to part ways with the group, and what brought you to Atlanta?

Harvey: Honestly, I was naive enough to think that I would just keep working with the Residents even a coast away. I’m post divorce — the relationship didn’t work out — but I fell in love, and I always knew that I wanted to have a family and all that stuff. I met someone in San Francisco, and we’d been dating about a year. The person I was dating was moving to Atlanta, and I moved there as well to continue living together. I really honestly did just think that I would keep doing stuff with the band. But of course they’re not the Rolling Stones in that we can be so far away and continue to work together. I think with the Residents being part of the DIY community is that we worked with who was in our general vicinity to a certain extent. I don’t want to get too negative, but I definitely probably would have done things differently had I realized I wasn’t going to be able to continue to work with the group. But I have a little boy now, so that’s the good part. I was able to have a family. For the older guys in the band, they have longer established relationships — not that being in a band and touring is not hard on your loved ones because it absolutely is — and I think that’s important to say.

ArtsATL: I’ve had the pleasure of seeing the Residents live in Atlanta on two occasions, and you sat in with them both times. Is this something you do every time the group comes to town?

Harvey: Right, that’s how it is. When they come to town, I’m always very respectful of the fact that this is a treat for me.

ArtsATL: Is there a final statement you’d want to make about Hardy Fox?

Harvey: He was a guy who gave more to the world than he took.

Hardy Fox’s final album with the Residents was The Ghost of Hope, released in 2017. The band’s first album without Fox, Intruders, was released earlier this year.