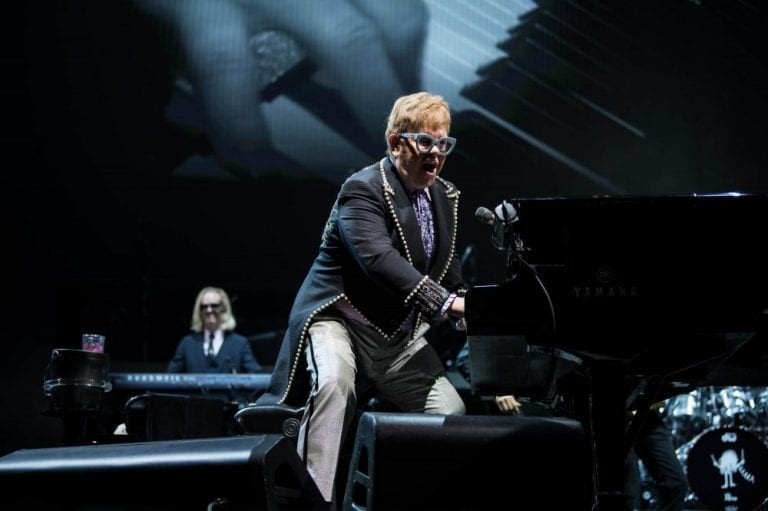 A new short film provides poignant, politically resonant imagery for a stripped-down version of Elton John’s 1970 classic “Border Song” on the musician’s farewell concert tour. With just a single light on John performing alone at the piano, a screen behind him shows dancers huddled and embracing, quickly transitioning to a series of portraits of diverse subjects with famous icons projected on or behind them, from Muhammad Ali and Elizabeth Taylor to Martin Luther King, Jr., and Nina Simone.

Directed by Atlanta artist Joseph Guay, the film creates a touching moment for the Farewell Yellow Brick Road Tour, which arrives at Atlanta’s State Farm Arena November 30 and December 1. The video reflects on icons, some no longer with us, and the impact they had on society through their words and actions.

“Elton has been a giant influence on me, pushing my work to become more statement driven,” says Guay, who has been friends with John for almost two decades. “Two years ago I made the shift to become a political artist, and he has really supported that journey. I’ve opened my eyes up to the fact that there’s a responsibility as an artist to do something more than decorate. My ability to be a part of ‘Border Song’ has come from that shift.”

David Furnish, Elton John’s husband and creative director of the Farewell Tour, approached Guay with the idea of creating an immersive film experience for “Border Song.” The song was released in 1970 and became John’s first song to chart in the U.S. Aretha Franklin famously covered “Border Song” in 1972, and she and John performed it as a duet in 1993. The song speaks about humanity and how we can “find a way to make all the hatred cease.”

Guay began working with Furnish and creative consultant Tony King to “make a statement about Elton and the world we live in, while bringing a sense of hope.” They kept the crew small to keep the project under wraps, shooting the video with a cast of 50 actors at Atlanta’s Bright Screen Studio over a four-day period.

Both Furnish and John wanted to show images of those who have affected John’s creative journey. For example, one of the little boys in the film resembles Ryan White, a teenager who contracted HIV through blood transfusion in 1984 and wasn’t allowed to come back to school. During that time, John befriended White and sat by his bedside. Other influences, friends and icons featured include John’s grandmother, Aretha Franklin, Nina Simone, Muhammad Ali, Princess Diana, Elizabeth Taylor, Malala Yousafzai and Stephen Hawking.

However, Guay didn’t just want the photographs on screen to appear flat. He settled on the idea of projecting the images onto other subjects that could potentially become “the next MLK or Nina Simone.” The projections are meant to be seen as if they’re coming from within.

Bookending the film are shots of the dancers from Terminus Modern Ballet Theatre, an independent Atlanta dance company made up of some of the dancers who left the Atlanta Ballet after a recent change in leadership. Among the dancers is Guay’s girlfriend, dancer Tara Lee.

“Her company and the dancers make almost like a globe of their bodies,” says Guay. “And then they start to unfold and open up, almost like opening the world up for us, for all these other scenes that are about to take place. We filmed the beginning and end in one shot, thanks to them. They’re so good with movement.”

Guay hopes that the audience after listening to the song and watching the video will walk away inspired and hopeful.

“David Furnish grounded the project and constantly reminded us about our purpose for the film,” he says. “The audience needs to know that every person in this film is from a different walk of life but carrying a statement of unity and human kindness.”

Guay says that being part of the project represents part of a new mission that he has set for his career. Last summer, Guay made a statement with his own “wall.” The artist built a large concrete and steel wall installation in midtown Atlanta, modeled after the real proposal for the U.S. and Mexico border wall as a way to facilitate difficult discussions. The installation was part of Guay’s move toward a new political stance as an artist, a stance he says was very much influenced and supported by John’s encouragement.

“The most important thing I have taken away from all the time I have spent with Elton is this,” Guay says. “Behind the persona, he is an incredible human being. He cares for the world he lives in and the direction it is going in. He personally puts so much time and finances into making a path for change for humanity and for equality and for lifting people out of suffering. Just being around that has made me realize there is a responsibility, not only to being an influential artist, but most of all to being an influential person in this world. I owe him a lot for all that he has taught me.”