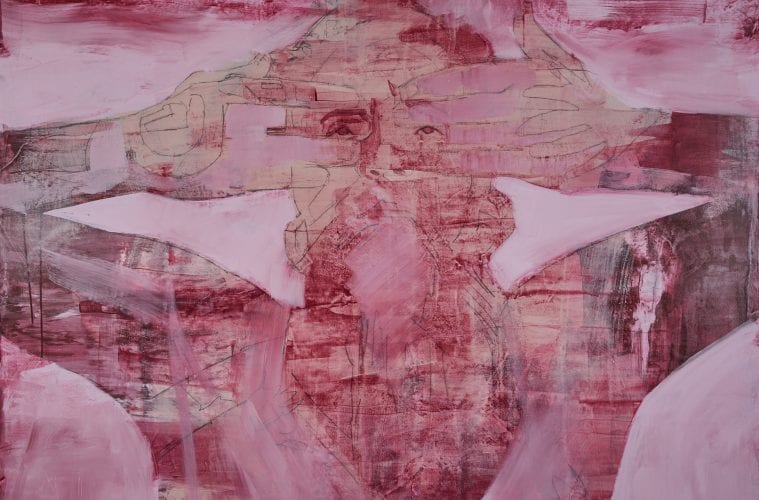 Atlanta painter Tommy Taylor explores the divided self in “Threshold”

Threshold, at Whitespace through December 1, is Tommy Taylor’s latest expedition into the realm of the divided self. On a literal level, this series of paintings begins with a fragmentary, near-abstract rendering of a figure, then progresses through nearly monochromatic images of a model caught in two different moments of dramatic hand gestures, with the face and hands tightly rendered in an otherwise cloudy field of abstraction. By the end of the sequence, the models have mutated into almost naturalistic portrayals of themselves as duos, each one a self accompanied or haunted by an identical twin. Taylor’s previous show at Whitespace six years ago was an investigation of models of middle-class masculinity as he encountered them in his childhood, models he attempted to refashion with the help of Joseph Campbell’s myth of the hero’s journey. While no such clear-cut source of inspiration lies behind these paintings, it’s evident that Taylor has absorbed older models for the spiritual quest, along with awareness of the knotty contemporary crises cited in his artist’s statement.

The exploration evident in these new works reflects a preoccupation with painterly questions — including how to return to figuration after a few years of working entirely with abstraction — but with psychological ones always present. The latter, however, are left as unresolved as the loosely rendered swirling backgrounds on which his dually portrayed subjects enact their personal transitions. Although he chose the photographs intuitively rather than as illustrations of a preplanned set of ideas, it’s intriguing to note that the monochromes are the most spectacular representations of individuals who seem uncomfortably contemplative or downright conflicted, as the second self melds uneasily with or floats unstably behind the face that each presents to the world. (While creating the works, Taylor did think of the two images as representing the self that the figures show to others and the different self that exists behind the mask, a longstanding, once almost standard, motif in art and thought.) Tommy Taylor, Forward and Back

It’s difficult to discern the specific differences between the personal moments Taylor has chosen to portray for the white female and white male figures versus the African American ones. Each one is individual, and all reflect Taylor’s prior knowledge of people he knows well who agreed to serve as his models. It’s worth noting that the overall sense of discomfort with the public self continues as the paintings evolve, but the alternative selves solidify into outright companions. Instead of the person behind the persona (as Jungian psychologists called the public self, Latin for “mask”), we have the self and its double — and the doppelgänger is another one of those motifs that occurs much more often in 19th- and 20th-century works of art and literature than in the artistic creations of our digitized era, in which the self seems to have become a fluidly undefined entity when it isn’t a construction created by responses to social media.