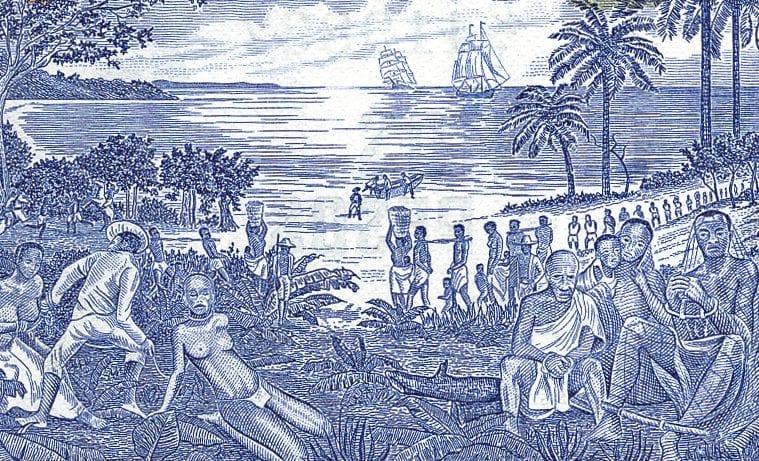 Money isn’t just something you spend, and it isn’t just about dead presidents. “Money is a source of history,” says Georgia State University history professor Harcourt Fuller. “It’s a source of culture. It doesn’t just have to be an elitist project. It can be something more democratic that represents people of all backgrounds.”

“Ever since I was a child, whenever I’ve had a little cash, I’ve used it to buy currencies from other countries,” says Fuller of his longtime hobby, which has become part of his scholarly research. Recent discussions around a planned $20 bill featuring Harriet Tubman and the release of a Canadian $10 bill featuring Nova Scotian civil rights pioneer Viola Desmond have heightened attention toward the possibility of new currencies depicting women and people of color. But Fuller is quick to point out that women and people of African descent have been featured on currencies throughout the world for hundreds of years. “The time seemed right for a public exhibition with my currency collection that really explores the idea of money as a historical and cultural source,” he says.

The new exhibition, curated by Tracy Murrell and designed by artist Irvin Wheeler, will display the artifacts hanging from specially created sculptural Baobab trees. The show is divided into 10 themes: The Ancient African World, Africana Art, Enslavement & Freedom, Colonialism, Independence, Economic Development, Black Music & Dance, Black Women on Money, Children’s Money and The Modern Africana World. While a number of the artifacts come from the countries of Africa and the black diaspora, European countries have also depicted people of African descent on their currencies, and a bank note from the Confederate States of America depicts enslaved Americans.

A 10 gourde note from Haiti depicts Sanité Bélair, a female freedom fighter in the Haitian Revolution.

Fuller points to a 500 peso note from Guinea-Bissau as one of the prizes of his collection. “It is one of the few African countries that has depicted the issue of slavery head-on on a bank note,” he says. “You would be hard pressed to find a second one. This image has Africans being captured, marched to the coast, subdued, branded. There are canoes waiting to take them to ships on the horizon. I’m currently doing research to find out who the artist is that created that image. What was he or she trying to portray beyond the obvious?”

Overall, Fuller says he hopes the exhibition, which has been recognized by UNESCO as part of the International Decade for People of African Descent, offers visitors the chance to contemplate the many things that money can be and the many things it can show us. Says Fuller, “I hope that the public will find value in it . . . No pun intended.”