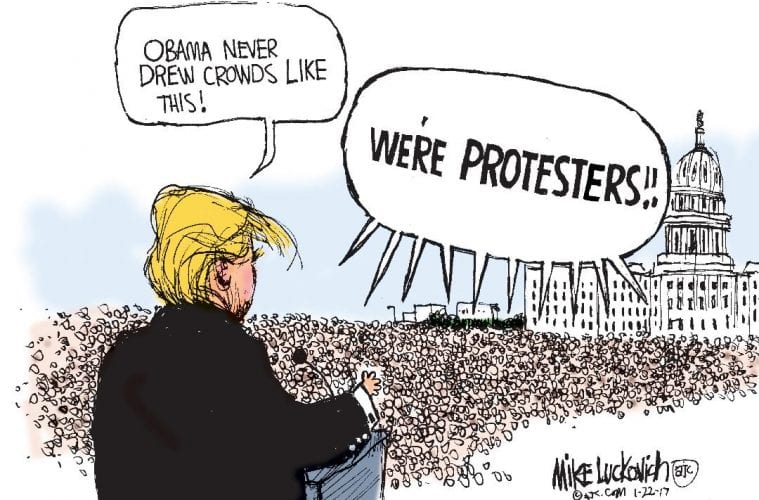 Q&A: Mike Luckovich talks about cartooning in the time of “A Very Stable Genius”

Mike Luckovich compares being a political cartoonist in the Trump era to being married to a nymphomaniac: fun at first, but it quickly becomes a nightmare.

In advance of his appearance at the MJCCA Book Festival this Sunday to discuss his new book A Very Stable Genius!, the two-time Pulitzer Prize-winning, internationally syndicated political cartoonist spoke with ArtsATL about the silver lining in covering the Trump presidency and where he goes to unplug and find beauty.

ArtsATL: As an illustrator, what do you regard as Trump’s most outstanding characteristics?

Mike Luckovich: He’s got that hair, which is really easy to have fun with. And then, of course, he’s got that pursed mouth that becomes a little hole. I really enjoy drawing that part of him. He wears his tie way too long. And because he was so focused on his hand size, among other things, on the campaign trail, I try to draw his hands as small as possible. 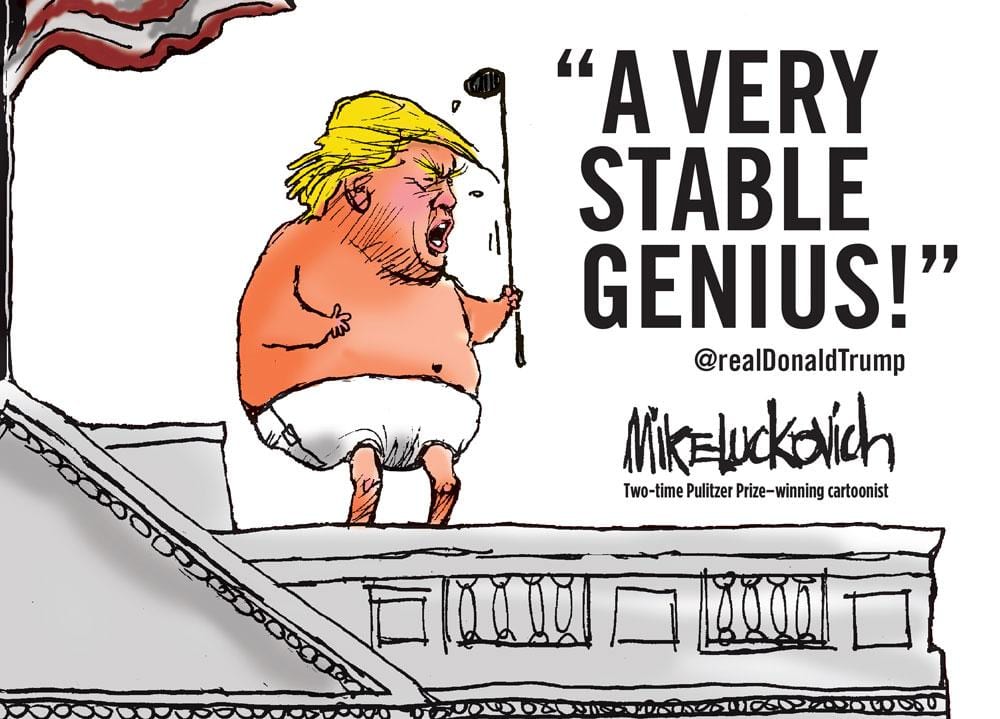 ArtsATL: Has your exposure to Trump’s lies, delusions of grandeur, incivility and incoherent speaking style normalized the hallmarks of his leadership in your mind?

Luckovich: [laughs] I’m not numb to it, and I’ll never get complacent, but I have gotten used to it because it’s become commonplace. I think it was Andrew Sullivan who said that when we had presidencies like Obama’s, you didn’t have to think about it every day. There was a stability, and you were calm because you knew that things were being handled. But when Trump got into power, my anxiety level went way, way up. It’s still up, but has come down as a coping mechanism.

ArtsATL: The nature of your job as a political cartoonist requires 24/7 vigilance given 45’s propensity to tweet around the clock. Do you ever allow yourself to unplug?

Luckovich: That’s a great question. Yes, my wife and I recently returned from Paris, where we rent the same Airbnb apartment every six months, hang out on a great market street called Rue Cler and just live like Parisians. I still check the news while we’re there, but I am so much more calm. That’s how I unplug.

ArtsATL: What do you do to remind yourself that beauty still exists in the world when you’re back in the trenches Stateside?

Luckovich: In my daily life, I try to be nice to people, especially people who may be feeling that they are not wanted in our society because of the way the Republicans are behaving. Mexican people, African American people, gay people, trans people . . . . Just going out of my way to make connections with people renews my spirits. 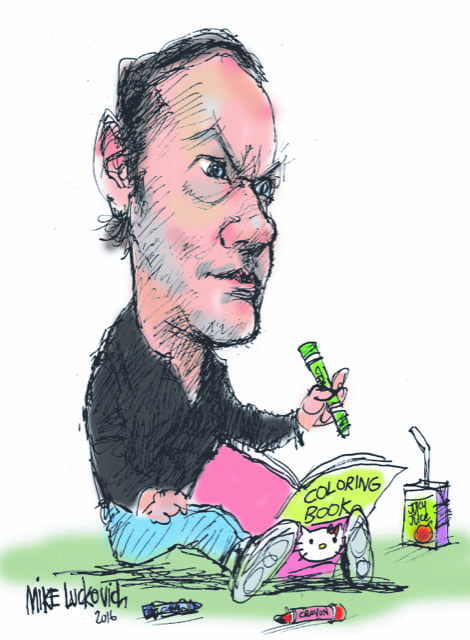 ArtsATL: What are your thoughts on Melania Trump? Do you see her as an innocent, an enabler or a willing collaborator?

Luckovich: She knew what she was getting with this guy. And there’s a coldness there: like the time she wore that “I Really Don’t Care” jacket when visiting detained immigrant children in a Texas border town. She’s not very self-aware, I think. She’s got that “Be Best” campaign to combat Internet bullying, yet she’s married to the biggest bully on the Internet. She just seems to be someone who Trump would marry. They both seem like they’re not very wonderful people.

ArtsATL: What do you think voters took for granted in the last election cycle that they will never take for granted again following Trump’s presidency?

Luckovich: I think a lot of non-voters sort of thought, I may not agree with who gets into power in the United States, but it’s like autopilot in a plane: it’s gonna fly, we’ll get there and we’re all gonna be fine. But a lot of people now realize how fragile our democracy is, and how a person who has no shame and no sense of right or wrong . . . if they get in there, they’re all these norms that our country has adhered to — basic truth being one — that you see eroding. We need to get back to right and wrong, decency and honesty. We are in a crisis here, but I’m optimistic that we’ll overcome this. And I’ll be even more optimistic if Democrats retake the House on November 6.