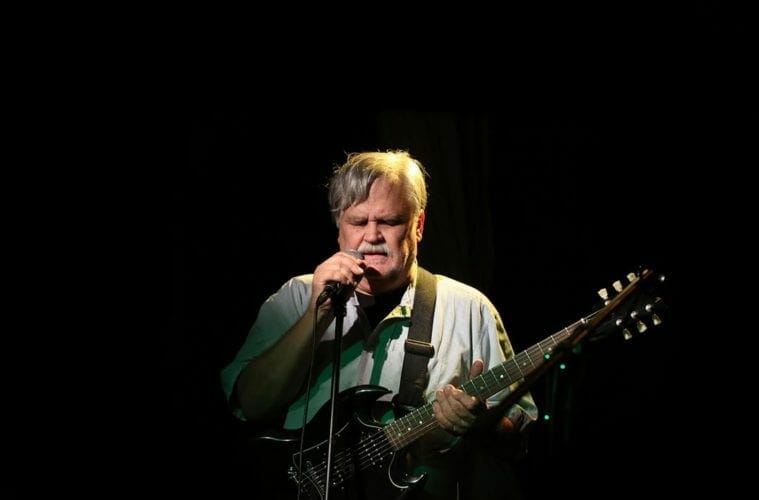 Jerry Grillo's "The Music and Mythocracy of Col. Bruce Hampton" digs into both the myths and realities of Hampton's life. (Courtesy of Jerry Grillo)

Jerry Grillo began the ambitious task of writing a biography of iconic Atlanta musician Col. Bruce Hampton in 2011, then almost abandoned it after Hampton’s sudden death in 2017 onstage at the Fox Theatre during an all-star musical celebration of his life and his 70th birthday. 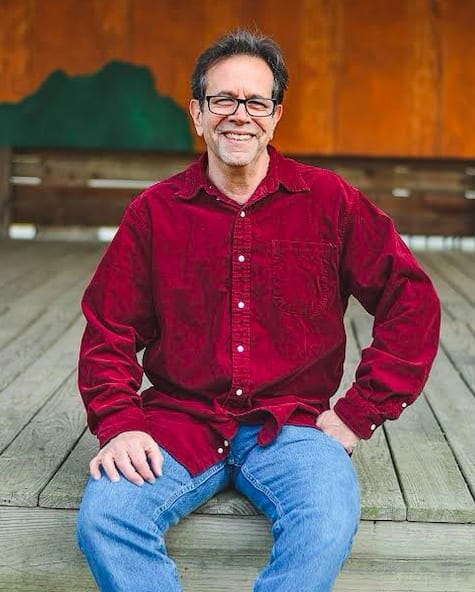 Jerry Grillo began work on “The Music and Mythocracy of Col. Bruce Hampton” in 2011.

After a six-month sabbatical, Grillo went back to the project. His book, The Music and Mythocracy of Col. Bruce Hampton: A Basically True Biography (The University of Georgia Press, 204 pages), was released this month. It delves into Hampton’s history in Atlanta, where he cofounded the Hampton Grease Band, the first rock band of note to emerge from the city. He also digs into Hampton’s influence on musicians that range from guitarist Derek Trucks and singer–songwriter Susan Tedeshi to Widespread Panic to Rolling Stones pianist–music director Chuck Leavell (who wrote the foreword). Hampton also was an actor, with a notable role in the Billy Bob Thornton film Sling Blade (1996).

Grillo, a freelance writer and playwright, has written about sports, business, music, politics and the environment. Writing about a larger-than-life figure like Hampton, he says, was a particular challenge.

ArtsATL recently chatted with him about the book, his friendship with Hampton and what he thinks Hampton’s legacy will be. (Full disclosure: ArtsATL executive editor Scott Freeman is among the nearly 100 people interviewed for the book.)

ArtsATL: How did you become a writer?

Jerry Grillo: It’s the only thing I figured I could do. I always loved the idea of writing newspaper stories. And I loved sportswriting. I began as a sportswriter and sports editor. When I was in college, I was also a cartoonist, but I realized I could write much better than I could draw.

ArtsATL: Do you have any writing rituals, or did you develop any during the course of doing this book?

Grillo: In my perfect world, my ritual is to find a quiet spot. But the reality — especially with COVID — became finding whatever space I could. I mostly wound up writing in my daughter’s old bedroom, which has become an office. And that was important because she ended up being real important to this book. She did a lot of the cutting and editing and the index so I could meet my deadlines. So it was cool how that happened.

ArtsATL: How did the idea for The Music and Mythocracy come about?

Grillo: It was in 2011. I remember I was walking in circles on my driveway. Though we’d been friends for several years, I was a little nervous because I was going to ask Bruce about writing a book about his life. 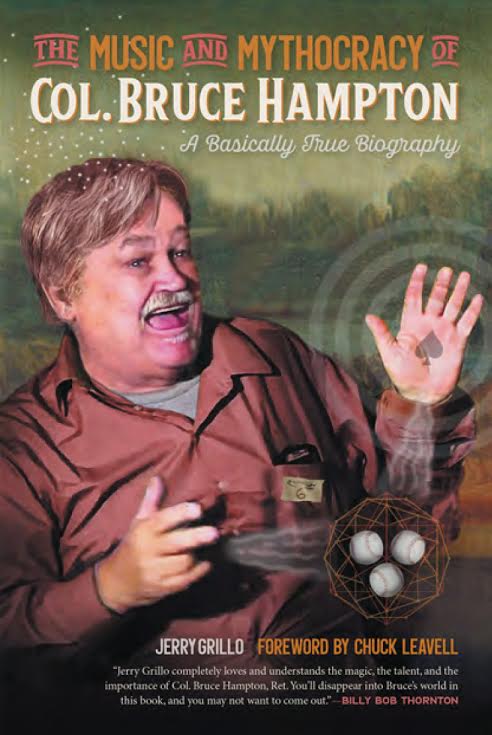 ArtsATL: How did you ask him, then, and how did he respond?

Grillo: I said, “Nobody’s written a book about you.” And he responded, “It’s in the book. Somebody wrote one.” But nobody had written one. He then told me I was a cool cat, and he dug my work — which was a high honor to me. And almost in a tone like he knew I wanted to ask him, Bruce essentially told me if I was crazy enough to want to do one, he was in. So he helped ease my nervousness and helped my confidence in the asking process.

ArtsATL: The Colonel used to talk a lot about intent and often asked his players about their intentions. What was your intention in writing this book?

Grillo: It’s funny, because I don’t think I was ever put to the same test as his players were, but my intention was just to write a straightforward biography — a long news story about a person I thought was incredibly influential and interesting, who was also fun and a good friend.

ArtsATL: The book idea came in 2011. How did the Colonel’s unexpected death in 2017 change your approach?

Grillo: First thing I said to myself was, “OK, totally different story.” Over the years, I’d been doing research and making notes, but so many things served to get in the way of writing the book. There were just so many reasons not to finish it. Ironically, I had some pages I’d planned to show Bruce the night of the Fox show — like probably sometime around 4 in the morning. That, of course, never happened. After the loss of Bruce, I was so dispirited and completely laid the book down for about six months. I really and truly didn’t know if I’d ever finish it.

Then I experienced my own life-threatening health scare in 2018, and finishing the book became top of the list for me. I realized that I didn’t want to die without having finished it. I picked it up with intent and said, “OK, I’m going to do this, do it right and do it respectfully. Not that I wasn’t going to do it respectfully before, but my intention got clear. I wanted to tell Bruce’s story — not like imitating Bruce with quirkiness and such because there was only one Bruce — but rather, write this story about Bruce. When my intent came into focus, I was driven to write the book.

ArtsATL: How difficult was it to keep your personal feelings separate from the story you were trying to tell, while also embracing them as part of Bruce’s story?

Grillo: I strived very hard to be the outsider and tried to keep “I” out of there as much as possible and be the third party telling this story. But it was not always easy, because Bruce was telling his stories to make us laugh — not to be quizzed on it later (chuckles). 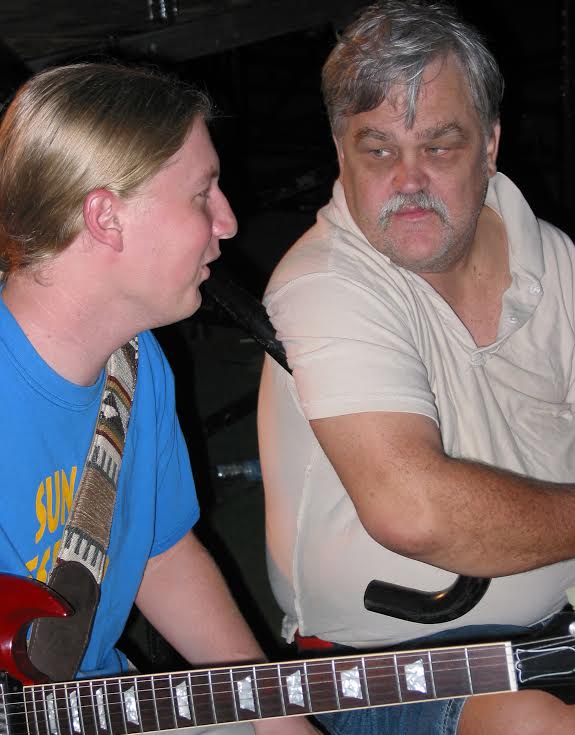 Bruce Hampton (right) mentored guitarist Derek Trucks from an early age. Trucks was onstage with Hampton when he collapsed during a 2017 Fox Theatre concert.

ArtsATL: On that note, about Bruce’s stories, you mention that you were probably biting off more than you could chew in trying to sort the truth from the mythology that surrounded him. You say you decided to go for both. Which became more prevalent for you?

Grillo: Bruce made the outlandishness so prevalent. So the outlandishness was easily accessible. I had so many of those kinds of stories from which to choose. So many stories didn’t actually make the book. I definitely tried ferreting out the truth and not because Bruce was trying to hide the truth, but because so much was simply unknown. Bruce didn’t want to talk about certain things. So I don’t think he ever wanted to write an autobiography. But he knew I was going to research certain things and seek the truth, and he was OK with that.

ArtsATL: What do you think Col. Bruce Hampton’s legacy is?

Grillo: I think you got the best answer out of him in his final interview. And after all my research, I agree with what he said. That is, his pragmatic answer, that he put a lot of “the mentally ill to work,” and kept a lot of people working over the years who might otherwise not have been working. That’s a legacy right there. And then, there’s also the legacy of all the musicians and non-musician friends, and also fans, who were influenced or inspired by him. For such an astral traveler, he was so down to Earth, and brought a lot of joy and freedom to a lot of people.

ArtsATL: If you could join Bruce one more time at IHOP, what do you think he’d have to say about the book?

Grillo: I think he might shake his head and say, “Gawd, you’ve done it now!” But I still think he’d offer me the pinky handshake, no eye contact (chuckles).