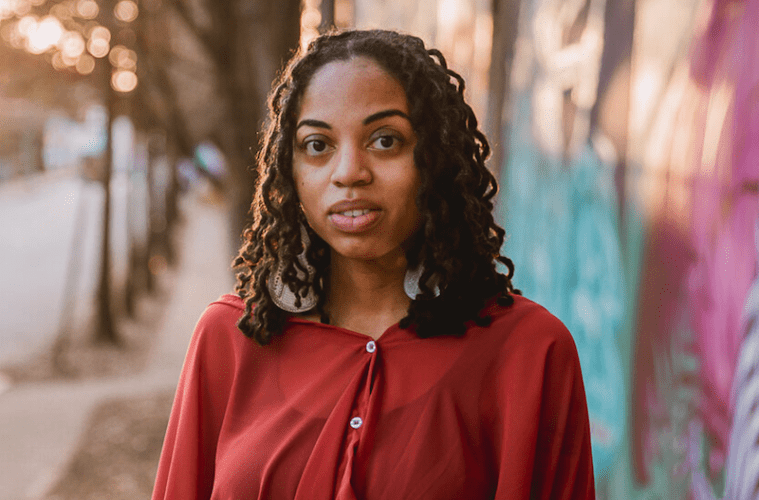 What Kacie Willis wanted to do with "You Heard Me Write" was use anonymity as a vessel in which good can come through." Its first season can be heard on Spotify.

It’s a tantalizing concept, but one fraught with all sorts of unknowns and intangibles. For the Spotify podcast You Heard Me Write, local artist Kacie Willis matched Atlanta artists of different backgrounds and disciplines to work on a multimedia project. The catch — they wouldn’t know who their counterparts were until they actually met.

The first season of the podcast launched in February and finished last week, with 10 regular episodes still available on Spotify. A bonus episode will drop Thursday, April 15. In all, the podcast has featured 30 original pieces that run 30 minutes each, give or take.

Willis, who’s been in Atlanta for almost eight years, is the founding producer of Could Be Pretty Cool, an LLC whose mission is to make creative experiences that inspire community-building through the arts. She began her career working primarily in arts administration for theaters and museums and as a freelance theatrical sound designer doing projects with 7 Stages, Horizon Theatre, the Center for Puppetry Arts and Synchronicity Theatre.

Rachel May, Synchronicity Theatre producing artistic director, told her about the Spotify Sound Up accelerator program for underrepresented voices, particularly women of color. It was a podcasting residency in New York, where 10 people developed a podcast idea. Willis applied and was accepted but was not chosen as a finalist who’d have her pilot project greenlighted.

So she produced the pilot on her own. Once she let Spotify hear the piece rather than merely explain it, they approved it and funded a season.

Then the real work began. Willis, 33, reached out to her theater friends to find guests. She chose a theme for each week — “Split It 50/50,” “A Moment of Total Silence,” “Advanced Calculus,” “The Magic (Trick) of Childhood,” for example — contacted a writer and gave that person two weeks to compose prose. Two sound designers/artists individually created music. When all the artists met weeks later, they heard the words set to music and discussed the project, and whatever came up in their conversation.

The shoots were tricky, largely because of COVID-19. Willis recorded the pilot in January 2020, bringing together three people for a collaborative conversation. Then the world changed. “I knew there was no way we could do this show remotely,” she says. “The whole part was having artists who didn’t know each other come together and have a group discussion. I did not want that to be over Zoom.”

She had to find a way to get people together safely amid the pandemic and search for outdoor recording spaces. She found an Airbnb in Stockbridge with a big backyard where she could set up her equipment. Participants would wear masks and maintain social distance. The project was harmonious in more ways than one.

“We were incredibly fortunate in that there were no arguments, no awkward silences,” Willis says. “Everyone was so excited about the novelty of the experience that we almost couldn’t stop talking. I also think that because people were not used to being around each other for so long, the vibe was everyone wanted to talk.” 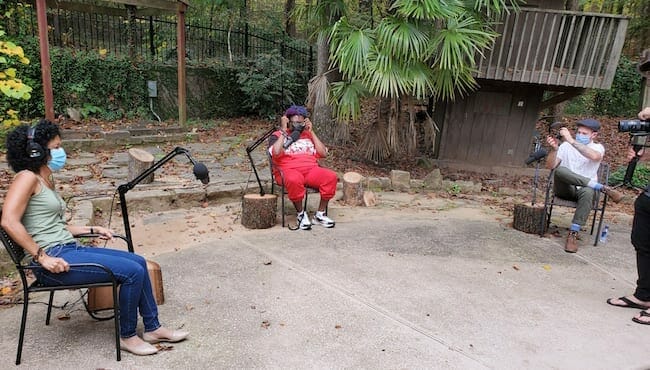 Episode 9, titled “Far Out: A Narrative Journey Into the Universe,” featured comedian Mark Kendall and sound artists Klimchak and Emmolei Sankofa. They talked about what happens after you die –and Atlanta’s obsession with the word “Peachtree.”

There were complications. One participant was uncomfortable leaving the car, so the setup was tweaked. Another session found cicadas and crickets creating unplanned background noise.

“What I wanted to do with this show is have anonymity be a vessel in which good can come through,” Willis says. “Once the guests came together it was  time to find genuine connection. I hope what people take away is that maybe showing up with a sense of wonder or curiosity or the possibility that you might meet someone with whom you have something in common is more the vibe than pessimism about meeting someone unlike you.”

In partnership with SCAD, Willis also has produced a podcast series titled White-Angle, which paired a Black filmmaker and a White filmmaker for conversations about agency, race and privilege in documentary filmmaking. It was inspired by last summer’s social unrest and how stories were being told and is available HERE.

Willis hopes for a second season of You Heard Me Write but won’t know for a bit. “This season is more than I ever expected,” she says. “We shall see.”