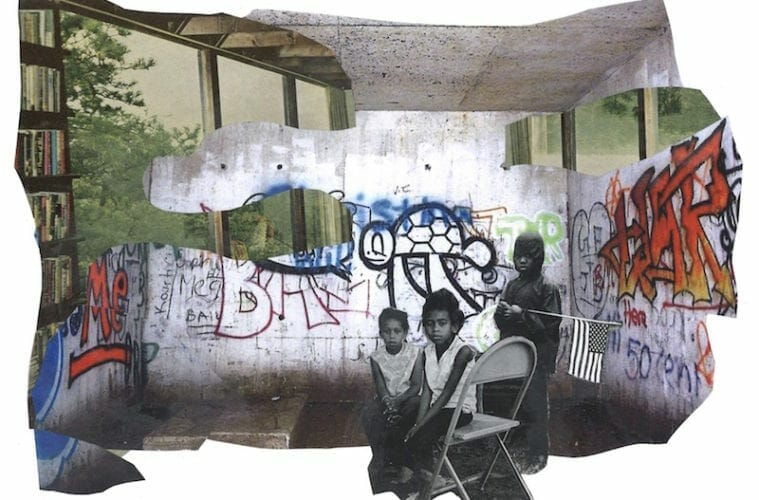 This monthly survey highlights some of the more notable Art+Design happenings in metro Atlanta. Jerry Cullum, the winner of a 2020 Rabkin Prize for arts journalism, has written about visual art in Atlanta and beyond for decades.

This year has revealed the difficulties of multi-tracking, keeping in mind many unrelated but tremendously important themes and happenings. In some ways, it’s even tougher than multitasking, because so much has had to be considered but not yet acted on. Now some of the art made during that period time frame is on view.

Eric Mack’s OF STONE AND STEM, at Whitespace through April 24, extends his earlier interest in architecture in the direction of sustainable design that unites buildings with the green world surrounding them. His complex collages include such real-life botanical specimens as raintree leaves, mango leaves and rose petals mingled with all sorts of arcane art materials — from handmade silk paper to recycled package paper and white glitter. One site-specific installation incorporates living plants, as did four works from a series that could not thrive in gallery conditions. 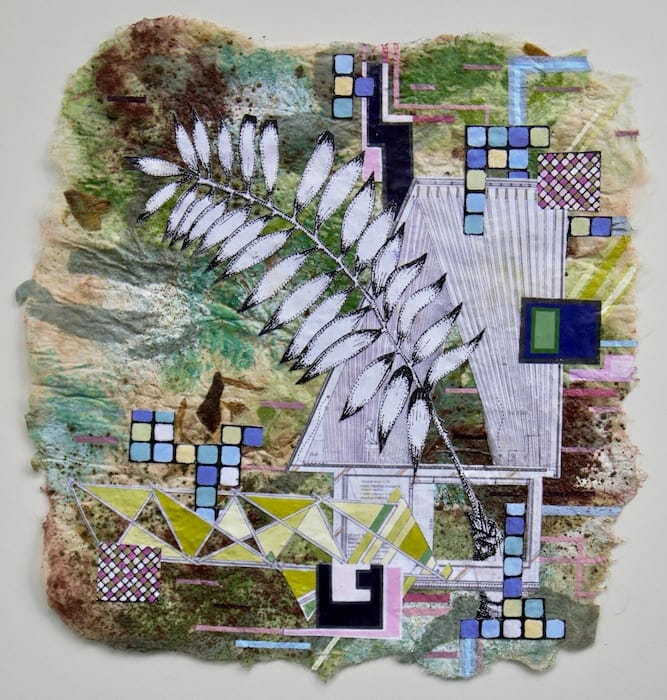 Much of the collage will bring pleasures of recognition to ardent gardeners. They are laid down with the UV screen used in gardens as protective shields; many of the architectural details come from plans for garden sheds and greenhouses. One small detail apparently refers to the derivation of the capitals of classical Corinthian columns from the stems and leaves of nature.

The collages’ visual rhythms invite enjoyment of abstracted form for its own sake, but the details invite reflection on larger conceptual issues raised in Mack’s exhibition statement: “How to sustain development while maintaining biodiversity is a problem that will affect the life of his small daughter even more than his life (though it’s already affecting everyone’s).”

Without saying so, Mack must also be all too aware that his daughter’s identification as African American is likely to affect her in decades to come as much as it implicitly does today. Sharon Shapiro’s SOCIAL FABRIC, at Poem 88 through May 8, is the Virginia-born artist’s attempt to extend her gaze to racial questions that were with her from childhood but never addressed by polite White society. Previous work — this is her third solo show at Poem 88 — has focused on sexism and the male gaze.

Her collages of images — mostly clipped from vintage magazines — deliver sometimes surreal, sometimes allegorical but always socially pointed juxtapositions of White and Black communities as they were prominently or almost invisibly made known in Shapiro growing-up days. Chandeliers and stylish home swimming pools appear repeatedly, with one pool scene invaded by a contemporary news image of the slogan-covered Confederate statue in her hometown of Charlottesville. 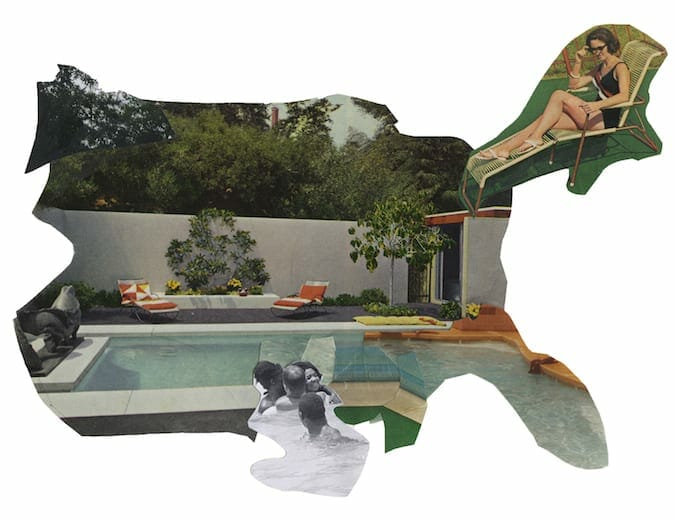 These are risky images in today’s circumstances, courageous in their willingness to present her latter-day perspective — an attempt at insight that, as all of us have learned, may be no more adequate to the truth now than the willed blindness was then. Her collages are allegories of a former media-invented world in which the comforts of the White upper-middle-class (and upward) were rendered in magazines in rich-toned equivalent of what a TV network of the day called “in living color.” If shown at all, African American life appeared in stark black-and-white (!) photographs. This is only one level of Shapiro’s symbolism, and it’s never quite that one-dimensional; the present day intrudes on the picture in more ways than an anomalously placed statue.

Shapiro’s collages both critique her own society and move African Americans into the complex level of visibility they have always deserved and increasingly have possessed, though not always on terms they have chosen. In some ways this is the most problematic aspect of this work, in a time when it’s questionable whether anyone can speak productively on behalf of a community that is not their own. Shapiro’s oeuvre has always been noted for probing the concealed or blatantly evident flaws of her own community, and this show is at its strongest when it reveals the ways and mores of her own social surroundings, holding them up for open-ended reflection.

The 9TH ART: FRAMES AND THOUGHT BUBBLES, a historical survey of comic books and graphic narratives on exhibit at Kennesaw State University’s Zuckerman Museum of Art through May 8, also deals with social issues. The classic strips that reached newspapers in the 19th-century humorously addressed dilemmas faced by new immigrants.

Winsor McCay‘s “Little Nemo in Slumberland” (1905–1927) is a dream-ridden example of the tensions and torsions faced by American society and psyches. They were temporarily derailed into escapism by what became known as the “Comics Code” but erupted again in a cascade of growing complexities that found spectacular visual expression in Neal Adams’ three-panel 1970 drawing in “Green Lantern/Green Arrow #76.” The topic of racial justice returned in a big way with an image that overflowed the central panel’s frame. 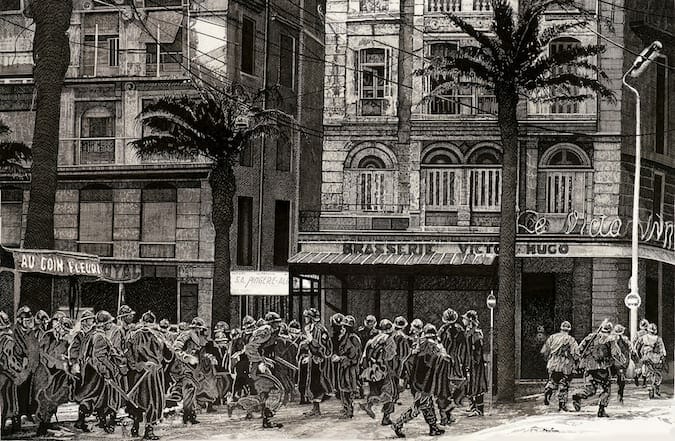 The cartoon frame, along with such visual conventions as the thought bubble, were developed almost from scratch in the medium that eventually birthed the graphic novel. Comics, which French and Belgian critics elevated to “ninth art” status, continue to evolve, as reflected in this exhibit’s inclusion of works by Belgian artists. Curator and KSU professor Geo Sip is represented by images from a graphic narrative he’s creating about the Algerian War for Independence (1954–62).

The 9th Art approaches the historical development of comics, meaning that original panels from Hal Foster’s “Prince Valiant” and Charles Schulz’s “Peanuts” appear alongside familiar names from many other newspaper strips and artists. The survey packs an amazing quantity of information into minimal gallery space; the virtual tour that substitutes for a catalog translates much of it into a globally accessible format.

Several metro Atlanta exhibits offer deeply contemplative entry points to spring, a season that feels transitional on several levels this year. Deedra Ludwig’s paintings, in an ARTISTS IN FOCUS show at Thomas Deans Fine Art (April 16–May 15), often incorporate actual fragments of the flora and terrain to which they respond. Ludwig’s compositions are emotionally evocative translations of the spirit of place. At their best they convey the overall feeling of a specific natural terrain better than a literally rendered landscape would. 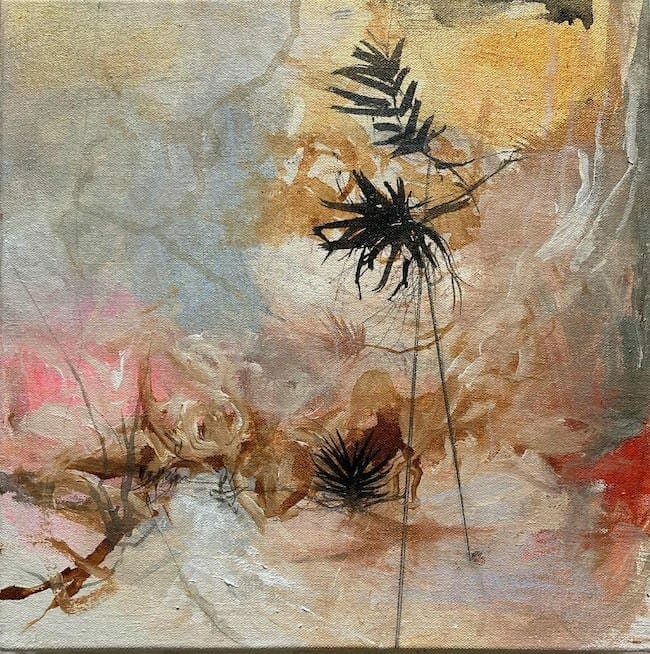 Steven L. Anderson’s ReNATURINGS at Kai Lin Art, where closing dates tend to be open-ended, features multimedia reinterpretations of Victorian botanical illustrations transferred onto canvas as a starting point for transparent washes of colored inks, oil stick and other media meant to transform the original colorless line drawings into expressions of — as he puts it — a “psychedelic spirit of nature whose vibrations will rattle the world back to life.” 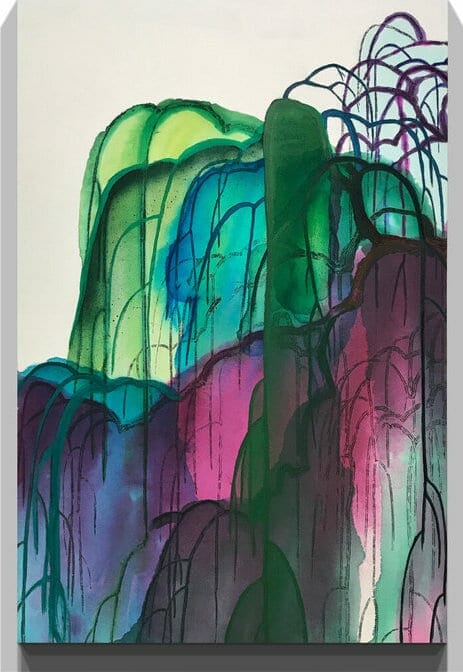 In PERSEPHONE, at Jackson Fine Art through May 15, Angela West has reinterpreted her photographs of efflorescent spring, overlaying paint strokes on a two-decade-old series. The subtle, ghostly quality of the alterations befits the metaphor of rebirth and return implied by the Greek myth of the exhibition title. 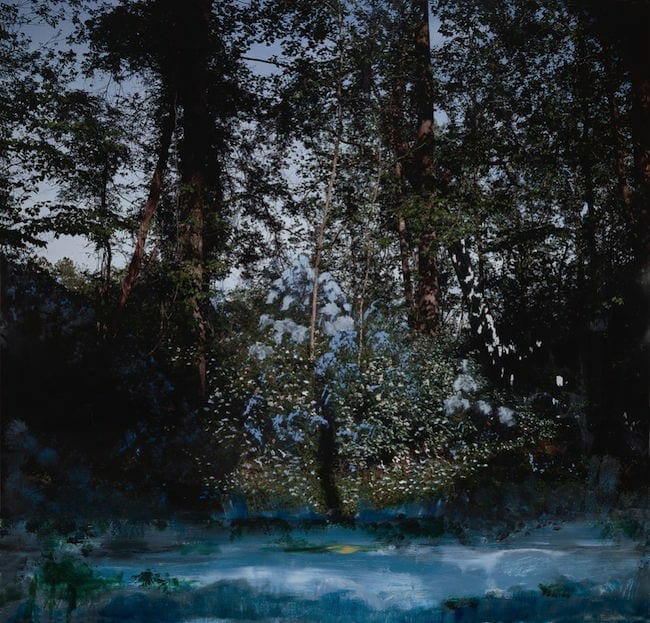 West’s show (in the back gallery) complements wonderfully Cig Harvey’s EAT FLOWERS (in the entrance gallery), in which evocative photographs of seductively lush flowers — some sinking into dark water — are a secondary motif alongside more disturbing images of Harvey’s daughter in the pervasive whiteness of 2018’s winter storm Skylar, a compost heap and apples frozen on a tree.

The flowers are thus only part of a psychological drama moved forward by a poetic narrative text in separate artwork nearby. Text and image form a counterpoint that will become more apparent in a forthcoming book but, as it is, the sense of underlying, possibly irresolvable searching is obscurely summarized in the luridly assertive maxim found in a neon wall sculpture reading “EAT flowers.”