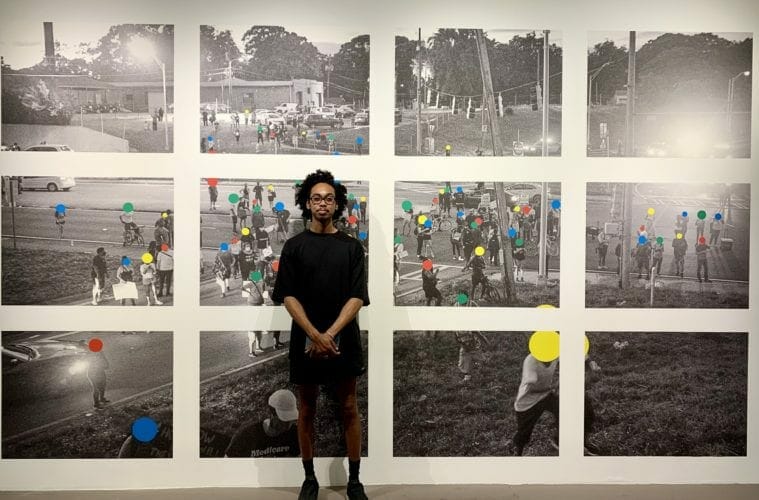 Davion Alston's "Another Bird of Paradise" at MOCA GA includes photos from last summer's anti-racism protests. He didn't want to show faces and lead police to participants, so he covered them with colored price stickers. (Photo by Howard Pousner)

Q&A: “Hope is a big thing for me,” says Davion Alston, a MOCA GA Working Artist

There is a dance of hurt and hope in Another Bird of Paradise, Davion Alston’s exhibition at MOCA GA. The fruit of his 2020–21 Working Artist Project fellowship, his exhibit focuses on our year-plus of discontent, when the pandemic pushed many of us to isolate indoors while social unrest forced others to take to the streets. 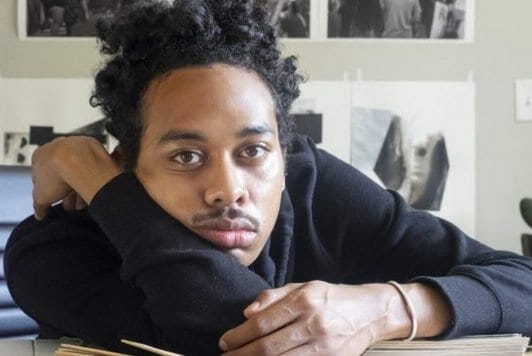 “I became very aware of radiating some form of light around me that helps give people a sense of hope,” Davion Alston says.

Primarily known as a photographer, Alston documented protests in Atlanta and his hometown of Darien in southeast Georgia. But when it came time to work on his MOCA GA exhibit, which he approached as a career breakthrough, he decided to open his creative lens. In addition to photos, Another Bird of Paradise (through July 24, artist talk at 7 tonight) includes low-to-the-ground shrines of arranged objects, hanging found-object installations, indigo-dyed textiles and video.

To Alston, the play of elongated shadows of many of the objects is as important as the pieces themselves. His gallery at MOCA GA feels like a reflective place to mourn loss, which Alston has experienced, and to measure how we’ve changed while surviving a time of tumult.

Alston, 29, was born in Landstuhl, Germany, and grew up amid the Geechee-Gullah culture on Georgia’s coast. He received his B.F.A. from Georgia State University’s Welch School of Art and Design.

After spending most of his 20s building his art-making practice and seeking the spark of momentum to make his voice better known, he is suddenly awash in opportunity. In addition to his Working Artist Project fellowship, Alston is an International Center of Photography: Black Press Freedom Fund recipient, a Black Artist Fund recipient and an Edge Award finalist at Swan Coach House Gallery. Earlier this summer, he had three billboards of his photos from Georgia protests on display in Northern Ireland as part of the Belfast Photo Festival. It’s a lot to wrap up before he leaves for Yale University this fall to pursue his M.F.A. 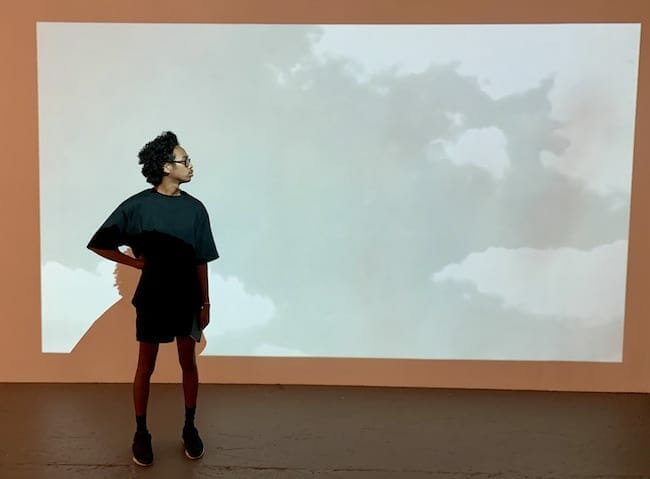 The video “The Weight of the Sky” is part of Davion Alston’s Working Artist Project exhibition, at MOCA GA through July 24. (Photo by Howard Pousner)

ArtsATL: Another Bird of Paradise is an exotic title. What is your thought behind it?

Davion Alston: Mostly I was inspired by photographer Taryn Simon’s body of work. She had this exhibition titled Birds of the West Indies where she documented the women from 007 movies as well as certain sports cars and weapons from the series, as well as every time a bird appeared in the films. I’ve always been drawn to birds, the idea of a constantly recurring theme of birds.

Another Bird of Paradise comes from that and essentially the idea of creating out of the desire to be loved, because there was not only the protests, there was the pandemic that gave us things to reflect on. So a lot of the exhibition is the cascading things from last year on top of a lot of love lost, depending on whether it was COVID, from police brutality or if it was even an overdose. Losing a loved one due to the rush of last year was a big arc for me. So it being called Another Bird of Paradise [relates to] collecting as the desire to be loved while also longing for those already lost.

ArtsATL: Loss was not just a subject, it was personal?

Alston: It was. I lost a friend from an accidental overdose. Two weeks after that, my cousin committed suicide. From those losses on top of everything that was going on — it all happened right after the announcement for the Working Artist Project award — I decided to take Amtrak across the country last November. I went up to Chicago and through the Midwest to Colorado. I just took that time to self-explore and creatively think what to do for this exhibition. It actually helped ground the work, not just the loss but like, “How do I move about finding myself within this work?” 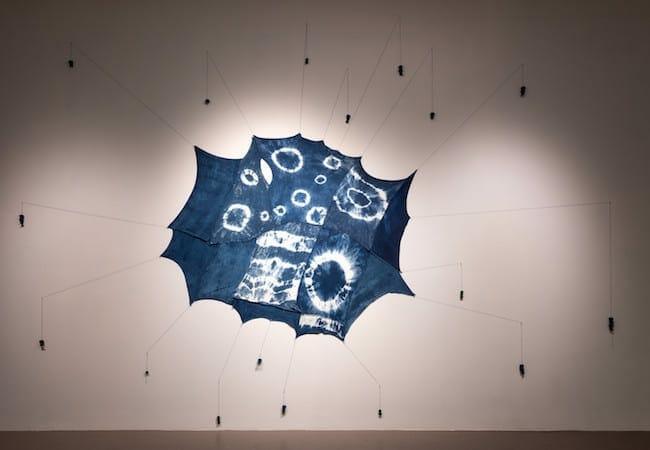 “Untitled (to Monté”) is an abstracted, indigo-dyed map of the world made of panels, thread, glass beads, metal beads, tomato cages and cotton rope.

ArtsATL: Did you find it hard to focus on your art with everything else happening?

Alston: Before and after my train trip, I really was stoked about the idea of getting up every day and just painting or doing some work. But early on it was like, “OK, not only is this pandemic getting in the way, but we’re having high counts of more killings of Black people,” whether it was from police brutality or Ahmaud Arbery’s case in Brunswick. There was a high moment of tension because of how much Black death was happening. As the pandemic continued, I went out to photograph the protests just so I could have images that helped me understand what was going on in the world. But I also had a huge ethical reason for why I did not want to show participant faces [which he covered with colored price stickers in a homage to conceptual artist John Baldessari]. I was concerned that they could be used for surveillance. I came to a lot of problems within my work.

ArtsATL: Do you think anything got resolved during the protests?

Alston: [Big sigh], yes and no, because it’s like as soon as something gets resolved, then something else goes under the table. Like the day that mask restrictions were raised was the same day that Georgia voter suppression laws went into to place. And with Keisha [Lance Bottoms] and [Brian] Kemp, when she’d say one thing, then here comes a lawsuit. . . . I think things changed, but it’s hard to say, because it feels like it’s all in the same place.

ArtsATL: How are you feeling now that the pandemic has lifted somewhat?

Alston: I definitely feel more resilient and stronger. This was my first time applying for the Working Artist Project award, and I applied solely because I applied for the Edge Award at Swan Coach House Gallery and I was a finalist. So I applied, and ever since then, it’s been this, this, this and this. It gave me a sense of how I serious I need to be about my longevity as well as how abundantly I can see the world now, because there have been moments of doubt, moments in my mid-20s of angst, where you’re like, “Are things going to change?”

ArtsATL: Well, it seems to be happening now. All of these institutions have seen virtue in your work. What do you think opened the door?

Alston: I hear a lot about my work, that there’s a sense of authenticity as well as a sense of hope. Through this dark period, I have picked up how to be a light for others, how to be that stagnant space between the sky and the earth, like a flagpole. And I’ve just learned to give myself grace with a lot of these things, to know that I’m only racing against myself. I’m breaking those walls [of self-doubt] down, putting it out there and, no matter what, the thing is out. It’s like, “Let it be in the world. Let it be a conduit.” I think through this whole process, I became very aware not just of the full work I put out, but really radiating some form of light around me that helps give people a sense of hope. Hope is a big thing for me. 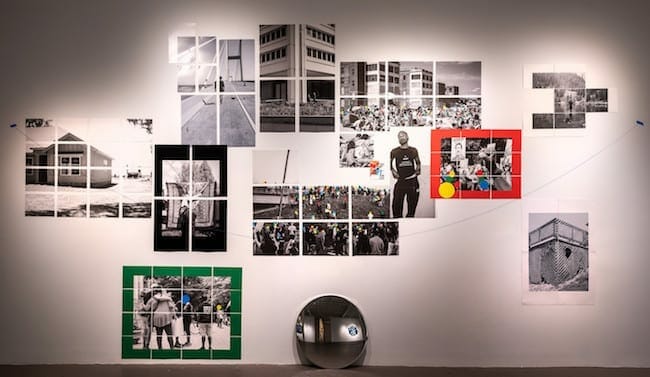 ArtsATL: People are telling you they get a good feeling from your work. But do you?

Alston: Yes, because I come from a military family, and it’s sort of sad to say in this moment, but a lot of them only understand crushing physical labor. They don’t see the intellectual labor that’s being put into my art. A lot of my immediate family has never seen my artwork. So I overwork myself in the same way my Dad validated his absence by working often. When I’m doing so much work, it doesn’t come off to me that I’m doing enough. So many people are like, “So much detail in your things . . .” and I’m like,
“It’s not enough for me!” When I started installing here, I didn’t feel like I had enough, but I did. So hearing the reaffirmation from visitors is the thing I glow from the most.

ArtsATL: Another Bird of Paradise includes an abstracted, indigo-dyed map of the world. After you complete your M.F.A,. where do you see yourself on the map?

Alston: Atlanta’s home. It’s always been home because I’ve always been able to make myself here, been able to hone in and have the time to become an artist fully. So my goal is two years at Yale, then maybe five years after that of post-whatever-comes. But I really want to be on a tenure track, refining and adding to the photography program at Spelman, Clark and Morehouse, because I find it very important to bring those resources back to Atlanta, then garnish that same kind of energy here.