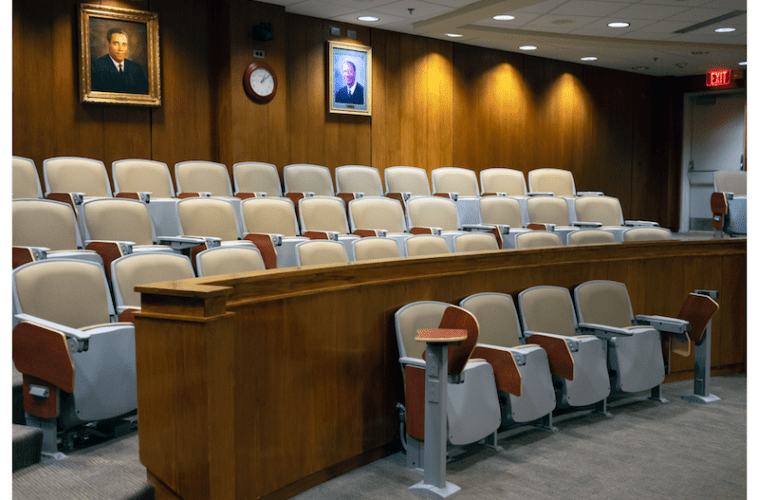 It looks real, but this is Courtney McClellan's digital print of the gallery in North Carolina Central law school's mock courtroom.

“All the world’s a stage, and all the men and women merely players,” Shakespeare famously wrote.

In Simulations, her new photography exhibition at the MOCA GA, Courtney McClellan focuses her lens on a specific “stage” — practice courtrooms at law schools across the South. For six years the Atlanta artist has studied the relationship between performance and the law, her inquiry centering on the legal simulations and professional practices used to educate future attorneys. So, learning that in the exhibit’s introductory text, it was surprising to find that there are no “players” on the stages that McClellan, 35, documents. Instead of lawyers-to-be, the 29 color photos focus on the architecture and design of these scholastic halls of justice, elaborately staged to appear like real ones, many with wood paneling, raised judge’s platforms and rows of upholstered jury seating.

Adding to the real-but-not-real feeling, the Atlanta artist has added wall moldings based on these practice courtrooms to the gallery, which is bathed in a blueish-white light that adds a surreal tinge to the proceedings.

The Greensboro, North Carolina, native — who’s also a writer, researcher and educator — was a 2019–20 MOCA GA Working Artist Project honoree, and Simulations is the result of that prize. She recently began her term as 2021 Innovator in Residence for the Library of Congress, a role about which we were curious. ArtsATL had questions; McClellan had answers.

ArtsATL:What made you decide to delve deeply into practice courtrooms?

Courtney McClellan: I’ve been thinking about this topic for about six years. I studied performance in graduate school and have always had an interest in performance. And my father is a lawyer and my mother is a retired public-school teacher, so the topics of law and education have been related and of interest. When I moved to Athens to teach at UGA, I became interested in observing undergraduate collegiate mock trials. That kind of peaked my interest because it was this really interesting interaction between group storytelling, thinking about the law, but it also has this element of live-action role-play. I saw it as something like Dungeons & Dragons where participants are both playing a game and telling a story together.

ArtsATL: Were these model courtrooms what you expected?

McClellan: Even as physical spaces they well-represented what I thought they were, which was a mixing of a courtroom, a classroom and a theater. There were some commonalities between them. Many of them had these courtroom structures — a judge’s bench, a jury box, seating for an audience. The classroom elements I noticed were projectors, folding desk chairs, clocks on the wall. And then from a theatrical standpoint, I saw kind of stage lighting and movie theater seats.

The things that made them different, one from the other, were how technologically advanced they were, and if they were really traditional or more modern in design. And then, of course, part of what I was looking for was how were they different from an actual courtroom? Because inevitably part of the interest in the future training of lawyers or mock trials would be what’s the similarity, how does this overlap with the actual practice of law? But also how does it diverge, what makes it different? ArtsATL: There are a dozen mock courtrooms included in “Simulations” and you have photographed a half-dozen more. Do you have a favorite?

McClellan: The first one that I documented was at UGA. That was the courtroom with the red velvet chairs, and there was something immediately theater-like about it that felt really powerful and dramatic. . . . [But] I’m interested in the simulation of them, so it’s not necessarily that an individual one that was [physically] my favorite. But seeing the differences and similarities between them.

ArtsATL: You concentrate on the spaces rather than the people in the spaces. Can you share about that choice?

McClellan: [Behind] the emptiness of the spaces was an interest in looking at the architecture itself, the structures, and how that tells us about the space — such as the use of columns and moldings, the Greek keys [motifs}. These are all kind of markers of democracies and architectural elements of authority as well. So I wanted to focus on those markers. Also, for me, seeing the spaces empty felt a little bit like a little potential energy with an empty stage where more people could engage. And it was less about one individual person practicing proceedings in the space than thinking about the hundreds if not thousands of people who might be in that space at some point.

ArtsATL: Does the architecture say something to you about power — who has it and who doesn’t?

McClellan: I think inevitably there is something about authority and power with the architectural elements of the space. It’s a place of public ritual and it’s intended to imply senses of power and control. Certainly there is potential for justice or injustice inside those rooms. So I think the architecture helps give a gravitas to what that is. And you can see that in the columns on the wall, the chairs and seating, the directionality of lots of people looking at one particular space. A lot of what I was interested in was all the types of looking that someone might be doing in that space. Where the judge is looking, where the jury is looking, the witness box looking out, all the seats that are looking at the staged space as well. ArtsATL: Stage settings play a role in how people experience the exhibit. What was your thinking?

McClellan: I was interested in pulling some of the architectural features that you see in a lot of the images, like the crown molding and the baseboards, out of the pictures and into the gallery. Kind of replicating those to highlight them and also to unify some aspects of the space. I like using that cool white light and the white-blue color in the gallery to remind people that it’s not quite reality — that we’re thinking about simulation.

ArtsATL: Do you want to continue documenting these practice courtrooms, and do you think there is potential for a book?

McClellan: I think there are more variations out there to observe, and I’m looking forward to continuing to look at these spaces. As for a book, I’m not really sure. Sometimes I try to follow the work. I don’t work in just one medium. I work in different media and a lot of that is because I like to let the research guide me. So I try to work in a way where I’m open to possibilities, and I start new projects with the feeling of being excited to see what I find. As an undergraduate, I studied journalism as well as visual art, and so these research tactics, or interviewing people, are common to my practice.

ArtsATL: What’s entailed in serving as Innovator in Residence for the Library of Congress?

McClellan: In my project Speculative Annotation, we’re going to create a dynamic website that will allow students to be in direct conversation with items from history. We’ll create a small collection of items and create a digital space where they can edit and annotate, make notes about the item and then also see some of the annotations made by some of the library’s curators and experts about the same items.

ArtsATL: How are you feeling about Atlanta as a base for these artistic pursuits?

McClellan: Atlanta’s an exciting place to make work because I think there are lots of opportunities but also because I feel like I have kind of the space to try out new ideas. I was very excited to be included in this round of Working Artist Projects exhibitions. It’s given me a chance to make this work that would’ve been challenging to make otherwise.

Simulations runs through March 27. It can be seen in-person or via a 360-degree digital tour.