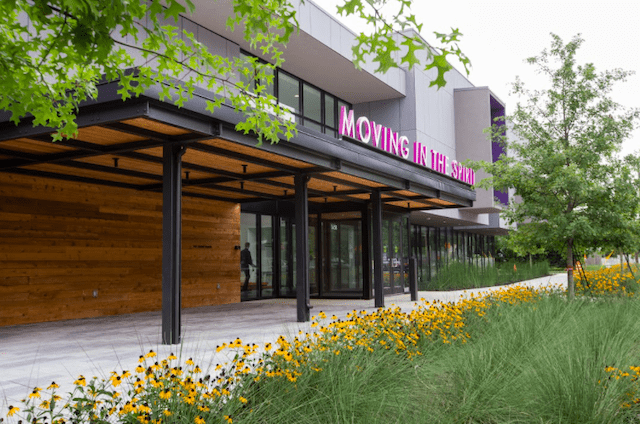 Moving in the Spirit's new $8.4 million facility, next to the Edgewood/Candler Park MARTA station, has sat empty for a year due to COVID-19. The nonprofit hopes to begin using the space on a small scale in March. (Photos by Atlanta Event Photography)

Dante Stephensen, the late owner of the iconic restaurant and jazz club Dante’s Down the Hatch, was known for his generosity, his love of the arts and the way he embraced friends and employees as family. He died in July 2020, but his spirit lives on in many ways, not the least of which is a $250,000 legacy gift to Moving in the Spirit, the Atlanta-based youth development program that engages children and teens through dance.

Stephensen was introduced to Moving in the Spirit by Ralph Edwards, a longtime friend and his estate trustee. Edwards’ daughter, Colie Neidlinger, is on the nonprofit’s board. Before the pandemic, Stephensen attended several Moving in the Spirit events at the Rialto Center for the Arts and toured the new $8.4 million facility next to the Edgewood/Candler Park MARTA station.

Still, for CEO Dana Upton the bequest was a surprise. “It was a true miracle,” she says. “When he toured the new building, he was delighted and inspired and blown away. His energy lit up every room.“

The outdoor space in front of the center will be named “The Hatch,” in Stephensen’s honor. Paver stones will be installed, each engraved with inspiring messages to be chosen by employees whom Stephensen nurtured over the years. Moving in the Spirit is asking for donations of $600 to $900 for each paver stone. Moving in the Spirit will be able to nearly double its number of students in the new facility.

Stephensen’s gift and proceeds from the pavers will help fund the organization’s signature dance programs post-pandemic and support the development of new programs that will teach students marketable production skills. “We can’t deliver our programming the way we used to because of COVID-19,” says CEO Genene Stewart. “This gift gives us the opportunity to reshape it.”

Moving in the Spirit received its occupancy permit for the new building last March, but has been unable to move in because of the shutdown. The board and staff went through a risk-management process recently to get the space ready for occupancy.

Now that COVID-19 positivity rates are declining, Stewart says some of faculty members are entering the building to give classes, which then go to students virtually. By mid-March, they hope to have 10 students at a time take classes in person, with full occupancy by July. They anticipate future programming will be a live/virtual hybrid.

Moving in the Spirit was founded in 1986 and has received numerous awards, including the prestigious Youth Program Award presented by the President’s Committee on the Arts and Humanities. In its previous locations, most recently the City of Atlanta’s J.D. Sims Recreation Center, Moving in the Spirit served from 250 to 290 students each week. The new space will accommodate 500.

Recruitment is a grassroots undertaking, with team members reaching out to community and neighborhood leaders and often going door to door with fliers to advertise the program. Now that its center is on a MARTA line, the team is exploring how to best reach potential students outside the immediate neighborhood.  “Dante’s gift comes at a transformative time for our organization,” Upton says. “We hope we can be good stewards of his gift and his spirit.”