Q&A: Alex Katz talks about a career on the leading edge, looking back at “This is Now”

The High Museum of Art’s retrospective, Alex Katz, This Is Now, surveys the work of one of the most influential painters of the 20th and 21st centuries. Katz’s sleek, straight-forward and abbreviated style has made its mark in both art and design for decades.

A life-long New Yorker, Katz has lived on the leading edge of the American vanguard through its myriad iterations. He remembers Jackson Pollock achieving fame in the 1940s. Painters Robert Rauschenberg and Philip Guston attended his openings in the 1950s. His style anticipated the Pop Art movement — and Andy Warhol — of the 60s.

At 87, he is an exuberant living time-capsule, still bursting with unrelenting enthusiasm for his work.

Alex Katz, This Is Now, curated by Michael Rooks, is unusual in its focus on landscape painting. Though best known for his figurative work, Katz made landscapes central to his work in the 1980s. His most recent landscapes — large-scale immersive works he calls “environmental paintings” — make up a third of the show.

ArtsATL spoke to him during his recent visit to Atlanta to hang the show and attend opening festivities.

ArtsATL: In your 2012 memoir Invented Symbols, you write about a certain tenacity from a very young age in your work ethic. You were born in 1927. Did coming of age during the Depression shape your ambition?

Alex Katz: The work ethic is two factors. One is my father. He had explosive energy and everything he did had to do with time and motion. The other thing is I grew up in a middle-class neighborhood where people were really serious about working, and the really serious guys stopped sports when they were 14 or 15. Too much time. I always felt like a bum next to those people. So I had that in front of me as examples when I decided to be an artist.

ArtsATL: The New York art world was much smaller when you were emerging, in some ways making it more accessible but also very provincial. Things really exploded when Jackson Pollock hit Life magazine in 1949. Was anything lost in that shift?

AK: I don’t know. It was just completely different. It was a very provincial city before 1949. The art world was kind of small. In the ’50s everything was sort of public. You could get right into it. As it changed, it provided different types of opportunities for different types of artists. And the artists changed as it changed, to put it that way.

ArtsATL: It seems that the largeness and accessibility of the art market has made quality in art diffuse. In a world where anyone can be an artist, anything can be art and anyone can be a critic, is quality a matter of taste or is it something more intrinsic?

AK: Quality varies. There’s fashion, which is a big factor in the art world. And then there’s something called shelf life, which has to do with fashion, too. When you talk about quality, internal quality in art enables it to move from one thing to another more easily. It’s not as local. Quality is a factor in the shelf life too, whereas style is a factor in what will be around next week.

ArtsATL: You often talk about the “immediate present” in your work, especially with the environmental paintings, which makes me think of action painting in the 1950s and the contemporary idea of focusing on the “present moment” as a stress-reducing mental exercise.

AK: Yeah, that has a lot to do with it. The gallery that I’m in, Gavin Brown, it’s all about zeitgeist, all about things happening in the present tense.

ArtsATL: Is what you call entering the “immediate present” a state of mind, or is it more about discerning the present in terms of a specific moment in time or history?

AK: It’s a philosophical position. It’s high risk because you can end up with a lot of garbage. You have to let everything go and hope for the best.

ArtsATL: How is that philosophy made manifest when you’re actually in front of the canvas?

AK: The painting is two states. One is the sketches which are very direct and unconscious, and that’s when I’m completely in the zone. And the other state is the big paintings. I try to paint them like the small paintings. Everything is fairly predetermined. I know how exactly it’s going to come out. But it isn’t as open as the sketches where I really don’t know what I’m doing.

ArtsATL: When you’re drawing or painting your landscape pieces en plein air, you’re trying to harness the bundle of sensations of being there live and in person. How does that attention shift or change when it’s directed at an individual whose portrait you’re painting?

AK: [For the environmental paintings], you’re trying to bring it into the present. It’s about the image and the sensation of light. So it’s not a conceptual idea, present tense. You’re just trying to do it. In portraiture, it changes a bit. The portraits are not as immediate as the landscapes. They’re more particular whereas the landscapes are more generalized.

ArtsATL: Has the kind of attention that painting portraits requires affected the way you interact with people in a general way?

AK: No, for the portraits you have an idea and someone fits into the idea and you try it out. It’s like that. The portrait is a particular person and then it’s a general person. They’re symbols. They’re not naturalistic. 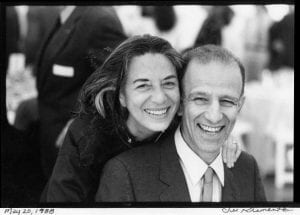 Alex Katz and wife Ada, a frequent subject in 1988. (Photo by Jill Krementz)

ArtsATL: You said in your memoir it was hard to capture the particularity of Ada, your wife of over 50 years, because you were too close and involved to actually see her.

AK: Yeah, if you’re close, you can’t get a good likeness. It took me about six-seven months to get one that I liked, and after that everything was easy.

ArtsATL: Painters have different language for entering the “zone” as people call it. Julie Mehretu thinks of it as tapping her irrational mind to do the work. Philip Guston referred to it as a “third hand” that served as an aide between him and the painting. Does that kind of language resonate with you? Is it a different process than image-making?

ArtsATL: Rooks’ essay in the exhibition catalog is very counter to the general response to your work because he writes about a latent but powerful emotional current running through it. Do you see what he sees in your work?

AK: Since a lot of it comes from the unconscious, it has an emotional factor to it. It’s a quality I want in the work, but I’m not focused on it.

ArtsATL: Critic Donald Kuspit wrote a visceral piece in the ’60s, describing your work as psychologically fraught, using words like “violent” and “nightmarish,” and full of latent “inner demons that haunt seemingly benign, pleasant figures.” He sounds a bit like Werner Herzog talking about the jungle.

AK: Well, Kuspit’s wife is a psychiatrist [laughter]. He has some ideas about psychology that he applies to all art. He’s a pretty interesting writer, but [what he wrote] doesn’t really seem to be the heart of the matter.

ArtsATL: You’ve actually been misunderstood quite a bit in your career. Many people think you were a product of Pop Art, but you actually preceded Warhol. Others have pegged you as painting bourgeoisie society in New York, but when you had your show at Yale in 2013, Robert Storr differed. He said there’s a “radical social vision in this work, but it’s so calm and cool people miss it.”

AK: His thing was that I paint lesbians and blacks and all kinds of other things. Basically, he was responding to the painting on a subject matter level, I thought, which is not how I think about it at all.

ArtsATL: But doesn’t class factor into your work nonetheless?

AK: Society is defined by clothes and haircuts [laughter]. The thing is that most of the people I paint are just people around, often bohemians, poets. It’s almost like the Impressionists, just painting the world you’re in. That’s the idea. I don’t live in a slum, and I don’t live in a fancy neighborhood, or I guess now it’s fancy, but it’s basically proletariat. But the style is elegant so it’s misleading to people. Because of the elegance of the style of the people, they think it’s upperclass or something.

ArtsATL: You talk about “style” quite a bit. How do you define style?

AK: Style makes everything cohesive. The old guys said style becomes content and content becomes form. That’s the abstract expressionism bible. In my paintings, style is not form. There’s this interview with Francesco Clemente where we argue. He thinks it’s form, but I think style is the real content.

ArtsATL: You’ve clearly evolved since the start of your career, but you’ve also remained rather consistent in your style over the years. What do you attribute to that?

AK: Willpower and character, and trusting yourself and the parts of yourself that don’t make sense. Painting is sort of like a community activity. You represent a lot of people when you paint.

It’s not a genius thing. It’s a collective thing. And the other part of it is that you have an idea of what art should be, and you hang onto that. It changes its faces. Dealing with something like reality, you’re dealing with a variable. So every solution you make is obsolete, and you have to make another solution.