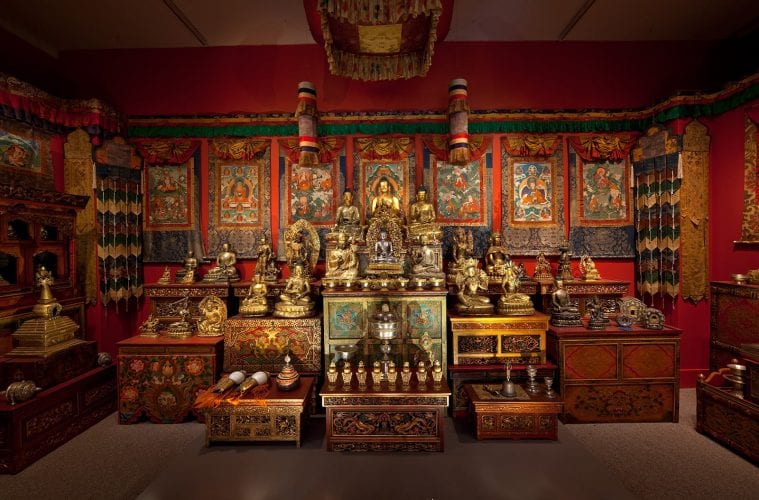 Preview: A Shrine for Tibet, Alice Kandell, and the World, Carlos Museum’s “Doorway to an Enlightened World” 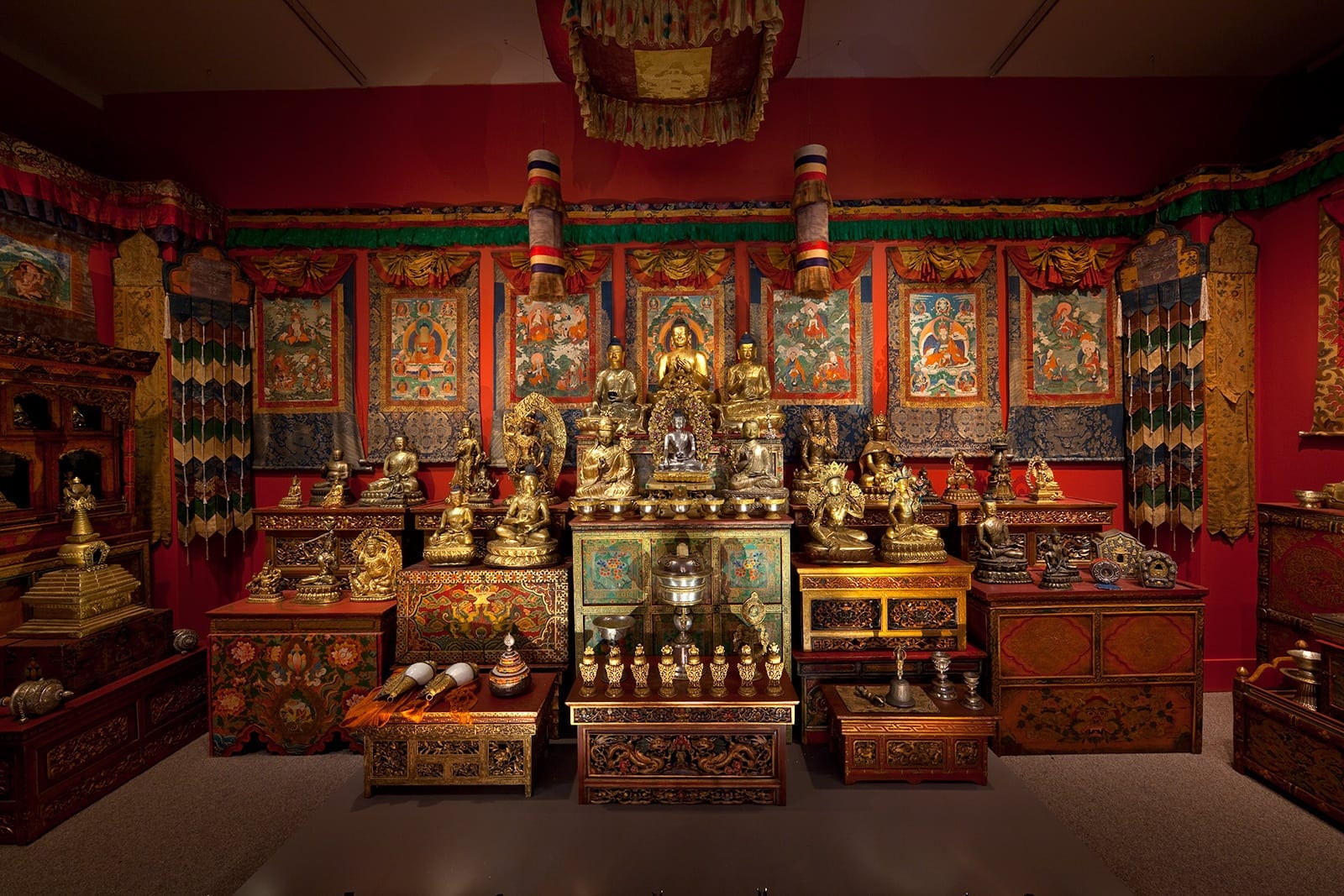 A Shrine for Tibet
Photo courtesy of The Freer Gallery of Art and Arthur M. Sackler Gallery, Smithsonian Institution. From The Alice S. Kandell Collection.

The now anachronistic Western fantasy of traveling to the remote, mysterious East and discovering ancient wisdom there has been largely demystified. It’s a fiction undercut by political theory, easy international travel, the Internet and warfare in many of the places long considered by the West repositories of secret truths: Unceasing violence makes it hard to imagine the present lands of ancient Egypt, Palestine, Mesopotamia and Tibet as Shangri-La.

That the “Orient” is a dream of the West does not, of course, mean that there is not value in the exchange of cultures. Scholar Robert Thurman describes the prime purpose of Tibet for the past twelve or so centuries as the transmission of Buddhist teaching, thus bringing qualities of compassion and wisdom to, first, Tibet’s warlike neighbors, and eventually the entire world. Emory’s Carlos Museum presents just such a transmission in its upcoming exhibition Doorway to an Enlightened World: The Tibetan Shrine from the Alice S. Kandell Collection (March 19 – November 27, 2016).

Alice S. Kandell’s initial visit in the 1960s to the then-Himalayan kingdom Sikkim was so framed by the exotically Oriental that she doubted her Harvard professors would grant her leave to go. Some years prior, her friend Hope Cooke had met and married a Sikkimese Prince, and Kandell traveled to the kingdom for Cooke’s coronation as Queen.

Kandell, a child psychologist, photographer and philanthropist, fell in love with Sikkim, took over 10,000 photographs and published two books about the region. She also began collecting Buddhist art. Her first encounter with Buddhist shrines was overpowering and would form the basis of her future experience of Buddhist art. 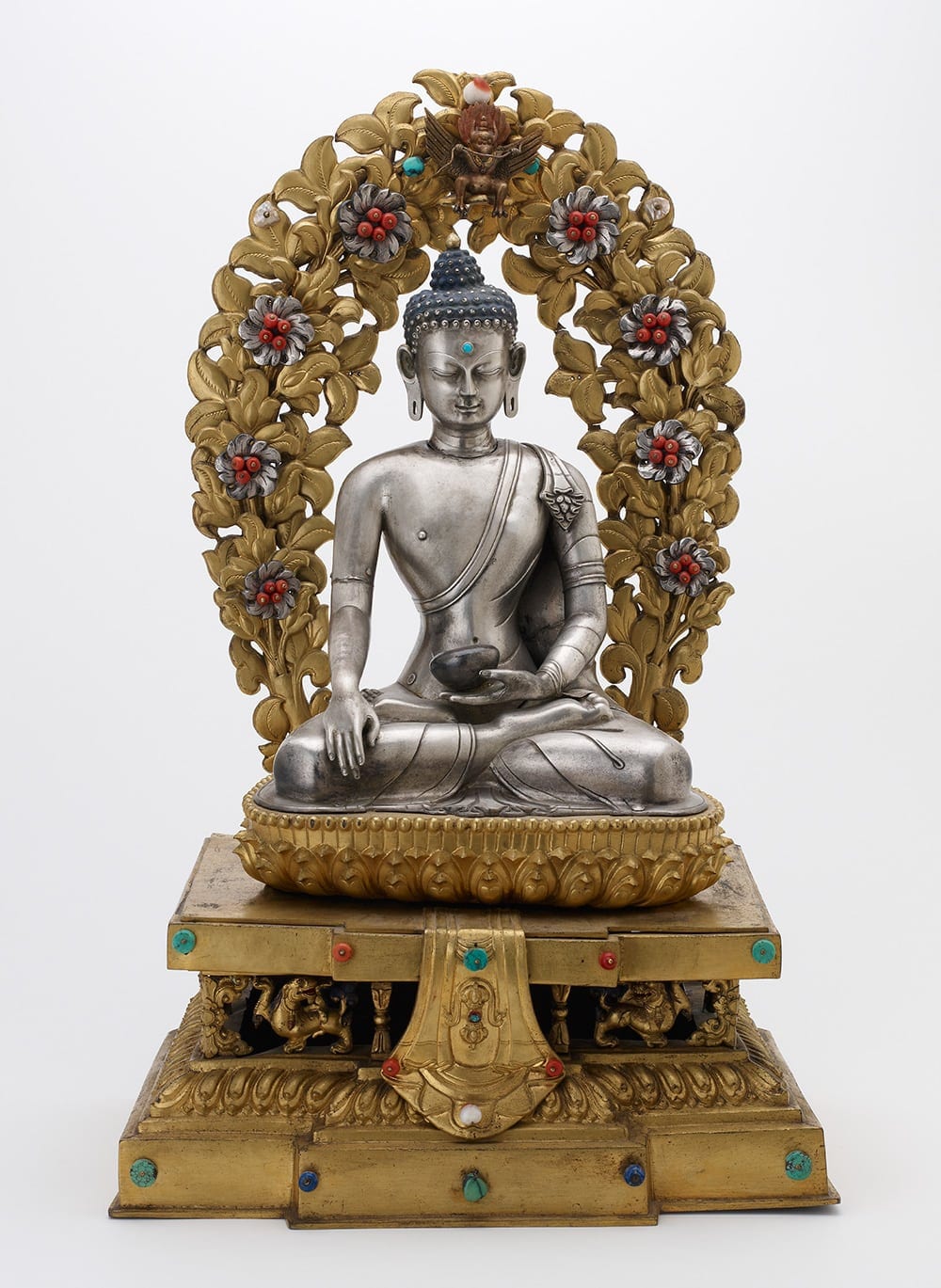 Shakyamuni Buddha in a Full Shrine
Qing; probably Dolonnor
Second half of the 18th to early 19th century
Silver repoussé image with turquoise urna; flora mandorla with leaves of gilt copper and flowers of silver with coral and mother-of-pearl; a solid cast garuda bird at the peak; heavily gilded bronze lotus seat and base with inset turquoise, coral, and lapis lazuli; base sealed with a copper plate incised with a double vajra; contents inside.
Photo courtesy of The Freer Gallery of Art and Arthur M. Sackler Gallery, Smithsonian Institution. From The Alice S. Kandell Collection.

Buddhist shrines in Tibet are designed for meditative or ritual practice; they are set up in homes and other private spaces, and even the humblest home has one. Kandell’s is anything but humble, with rare and exquisite pieces, most created for the very rich of Tibetan society.

As compared with artwork presented museum-style — each separated by a space of white wall — shrines gather thangkas (paintings), statues and ritual objects in order to focus the viewer on the opportunity Buddhism provides to step through a doorway from one reality to another. Buddhist art is a technology for seeing this other world, a means for the viewer to recognize impermanence.

Kandell, guided by experienced collector of Himalayan art Philip Rudko, assembled her collection of Tibetan art into a shrine in her New York City apartment. When Kandell donated her collection to the Smithsonian in 2011, it came with a proviso: it must be exhibited in the form of the shrine she’d constructed. Kandell explained in 2008: ”Although they are often — almost always — very artistic, they were not made as art. They were made as works of devotion, and I wanted to display them as they would have been displayed in a Tibetan shrine.”

The Shrine is “considered the only one of such magnitude and artistic quality in the U.S.”

Her decision to present her collection as an intact shrine is, according to Emory professor Sara McClintock, based on the idea that “viewing Tibetan art objects arranged in a shrine is a fundamentally different experience from seeing each object individually.”

The dense presentation of imagery in the Kandell shrine creates a powerful impression, and is designed to offer viewers an opportunity to see Buddhist art for what it actually is: an entryway from one world to another. “Maintaining a personal shrine and place daily offerings upon it is one of the most basic of all Tibetan Buddhist practices,” explains McClintock. “The deities on the altar symbolize both the many beings who have attained enlightenment, who are worthy of homage, and the ultimate state of enlightenment to which the practitioner aspires.” 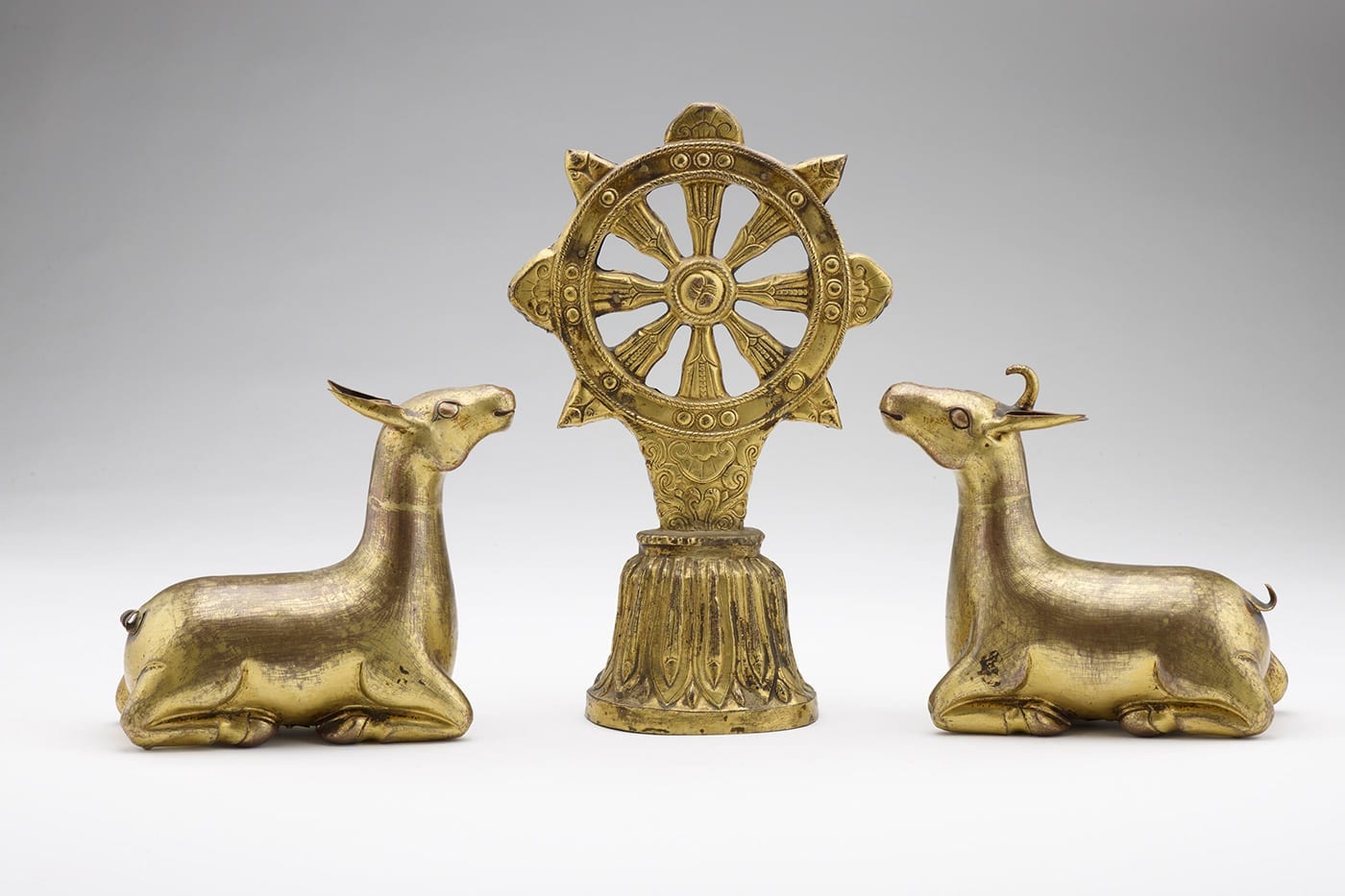 Seeing religious art in a museum is different from experiencing it as part of a rite or ritual, or even as seen in a more strictly religious context (regardless of whether one’s mindset is aesthetic or religious). Think about seeing one of Giotto’s small paintings in the Metropolitan, rather than seeing dozens lining the walls in the tiny Scrovegni Chapel in Padua.

The most famous and sacred shrine in Tibetan Buddhism is the Jokhang in Lhasa. Its creation was connected with the introduction of Buddhism to Tibetan in the seventh century. A Tang princess was sent as tribute to the Emperor of Tibet, and she brought with her an image of Shakyamuni Buddha, which became the central image of the shrine. The Emperor (or his successor) became a strong advocate for Buddhism, and over the centuries following Tibet transforming from a warring state to a largely pacific one.

Like so many other shrines and monasteries, the Jokhang was looted and its contents destroyed or dispersed during the Chinese communist invasion of Tibet in the middle of the 20th century. The same events led many Tibetans to flee, and the pieces in the Kandell collection were largely purchased from such exiles.

Thurman estimates that 95 percent of the religious art in Tibet was destroyed. Despite the ambiguity of removing religious art from its culture and putting it in the hands of private collectors, many see justification in the case of Tibet, owing to the immediate threat of destruction during the Cultural Revolution.

The myriad physical forms that Buddhist art takes “represent the body, speech and mind of the Buddha.” (“Engaging Buddhist Art Along the Path to Enlightenment,” Ven. Khenpo Phuntsok Tashi, The Dragon’s Gift, p 36.)  For example: sculptures and paintings represent the Buddha’s body, texts are the Buddha’s speech and stupas the Buddha mind.

Tibetan Buddhist practice uses many ritual objects, all symbolic of Buddhist teaching: the purbha (a ritual dagger) cuts through mental obstacles; the dorje, a pronged implement representing a thunderbolt that signifies the indestructibility of a non-attachment; the ghanta, a ritual bell representing wisdom connected to compassion (as represented by the dorje) — these latter two implements are utilized together to show the inseparability of wisdom and compassion in Buddhist practice.

Kandell’s approach to collecting is based on two principles: old and beautiful. Her shrine includes pieces from across a wide range of styles (Nepalese, Chinese, Western Tibetan, Mongolian) and time periods (12th-20th century).

By offering visitors to the shrine a doorway to enlightenment, Kandell continues the work of generations of Tibetans. “Her dedication comes … from a recognition that all the elements of what can be truly called ‘humane civilization’ — wisdom, generosity, gentleness, justice, creativity — shine forth from Tibet’s art and literature and culture, and still are present in its people.” (Thurman, 14)

Although Kendall has given the shrine to the Smithsonian, her hope ultimately is that it might return to the Tibetan people. Politics make this impossible at present. Although cold comfort to exiled Tibetans and those now suffering under Chinese rule, the shrine does further the purpose that Tibetans have pursued for more than twelve centuries. In this sense — as a doorway for visitors in the United States and wherever it is exhibited — the shrine has already made its return.

An exceptionally rich range of programs for adults and children accompany the exhibition. Visit the Carlos Museum website for details.

Jon Ciliberto is an Atlanta attorney, artist, musician/composer and writer. He co-founded and has edited Buddhist Art News since 2007.