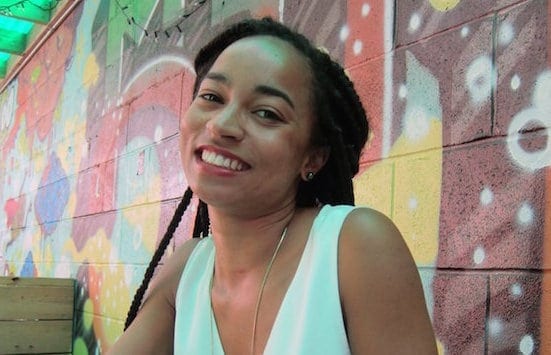 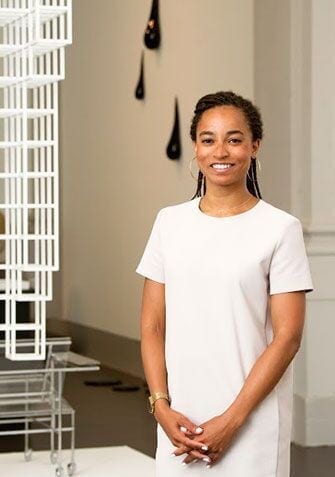 “I am a mere simpleton, [this painting] is a real person,” says writer Alice Notley in a 1975 article about the Art Institute of Chicago. While Notley’s assertion may seem almost flip to some, after speaking with Rujeko Hockley, Brooklyn Museum curator and doctoral candidate in the Visual Arts Department at UC San Diego, the potential depth of Notley’s thought extends for me. We are always trying, especially in art, to reach with our living, impossibly and perhaps even futilely, beyond the confines of a body. Do we reach with our interior, our feeling and thinking, more often than our exterior, our skin? I wonder. The museum and how it gathers art; is that an attempt at embodying both those kinds of reaching? Can it make us see what change our individual body, our city and its thoughts might urgently need? What about a museum and the people, the work that moves through it, has the potential to be or always has been a collaboration?

Young, exciting curators like Rujeko Hockley are bringing these ideas and questions to the forefront of their discussions of how a show or exhibition of work comes together. Such emphasis importantly coincides with conversations about the responsibility of institutions and those who create or arrange inside them to consider issues of representation, counter-narratives and how to bring more people to public, creative spaces. Bringing bodies and their feelings to the museum, warmly surrounding them with challenging thought and image, has the potential to facilitate vigorous public engagement, discussion and can illuminate or further support the complexities of many of our country’s current social concerns.

With much of this in mind, the Visual Scholarship Initiative at Emory University, a student-run organization committed to visual and multimedia practices in contemporary interdisciplinary scholarship, will host a free two-day event “Curatorial Practices and Social Movements” at Emory University and at the Atlanta Contemporary. Rujeko Hockley will give her keynote talk on Friday, March 25 at 6:30 p.m. in the Jones Room (311) of Emory’s Woodruff Library. A reception will follow. On Saturday March 26 from 1-3 p.m., the Atlanta Contemporary will host a panel with Andy Ditzler, Alesandra Raengo and Kevin Sipp.

ArtsATL: How can the act of curation be transformed into an expansive, generative practice, an act of space making or radical space happening?

Rujeko Hockley: It’s interesting to be a curator in this historical moment, it’s interesting to be a person whose job title is curator when that phrase or description has percolated out into the broader culture in a way that is pretty unprecedented. There’s always the impulse, the slightly uncharitable impulse, to say, “No, that’s not what we do,” or “What we do is different,” or to protect the territory. [Curating] is an act of power and that is something I’m very aware of, though that has not necessarily been something that the field has always been aware of. What is the best, it’s subjective. [The art you see at the Brooklyn Museum], it’s what I like the best or it’s what works best for the museum or it’s what works best in this exhibition or it’s what we were able to get loaned versus what we weren’t. There are these logistical nuts and bolts as far as why things go on the wall or in an exhibition as well as these subjective, qualitative reasons.

In terms of what’s radical or expansive or generative, people think it has a lot to do with the topics. What kind of artist you’re thinking about, what kind of stories or historical events [you’re featuring], what you’re privileging. However, I think, working in an institutional setting, the most radical counter to this idea that the curator has all the power, the curator is deciding is to actually work very collaboratively and recognize the reality that has always been true. I might generate the idea. I might do the research. I might put together the checklist. But from there it goes to our registrars, it goes to our art handlers, it goes to my colleagues in education, it goes to people in development. Every part of the museum is involved. That truth is the truest thing about being a curator. 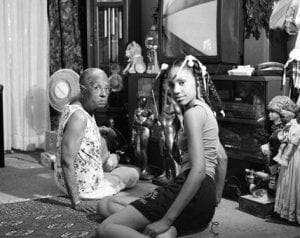 Grandma Ruby and Me, 2005, from The Notion of Family (Aperture, 2014). LaToya Ruby Frazier. Courtesy the Brooklyn Museum.

ArtsATL: How does art, the practice of seeing it, making it or experiencing proximity to art from somewhere in between those two things, result in public scholarship? How does public scholarship bloom alongside social movement and social urgency?

Hockley: The idea of a public scholar or public scholarship is that anybody can be a person who can speak on things. You don’t have to be an expert to have an opinion. You can come into a museum and have an opinion whether or not you’ve ever been to a museum, whether or not you’ve ever seen [a particular piece of art] before, whether or not you’ve ever thought about it before. How do we empower people to feel confident in their own opinions, particularly about things that have been historically less welcoming? Museums are one of those things [that have been historically less welcoming], for better or for worse. That’s something that is our responsibility to be conscious of and to be critical of. We have to think about how accepted people feel, how empowered they feel to have an idea about something [in the museum], and in the broader sense, outside of the museum.

Art does something special in terms of education around social movements and around urgent social issues. It’s different to experience an art piece than it is to read an article in a newspaper or to read a book or to see a news broadcast. It’s hard to articulate what that [difference] is but no one would spend their lives doing this if there wasn’t something special about it, if art wasn’t a uniquely affecting way to open people’s eyes.

Hockley: Or even as opposed to getting a journalistic, documentary-like experience of what’s happening versus seeing something that’s very abstract or poetic, something that’s not just giving you the facts. Because we do have 24-hour news, because we have smart phones, we can find out what really happened much more easily than in the past. We’re very reliant on that fact-ness. Art, regardless of what medium it’s in, is abstract thinking. Encouraging people and allowing people to participate in that kind of thinking, whether it’s in art classes or in museums or going to lectures or whatever it is, it expands your mind. It’s not meant to change your mind to think this instead of that. It’s meant to change your thinking.

ArtsATL: You’ve been asked to speak specifically about your recent work facilitating exhibits by Kehinde Wiley and LaToya Ruby Frazier at the Brooklyn Museum. What is it about these two shows that speaks to the nature and subject of this event?

Hockley: Both of those shows, both of those artists, both of those exhibitions are thinking about counter narrative, about bringing attention to overlooked issues that are important to society and to people that are overlooked. They are different in that LaToya is thinking about a very specific community that’s in Braddock, Pennsylvania. That series that we showed is called The Notion of Family. It’s about her family, it’s about where she’s from, it’s about the effects, on her family and her community, of industrial waste, of the post-industrial era, of outsourcing, of economic changes and shifts in global economy. It’s really rooted in a real time, a real place and a real community. Kehinde, on the other hand, his paintings aren’t saying, “This is this person who is this person in this place.” It’s a different approach. He’s thinking about the very big picture, which obviously LaToya is, too, but the very big picture concerning black people in the world. He’s particularly, though he’s expanded since starting out, thinking about the big picture of black men in the world 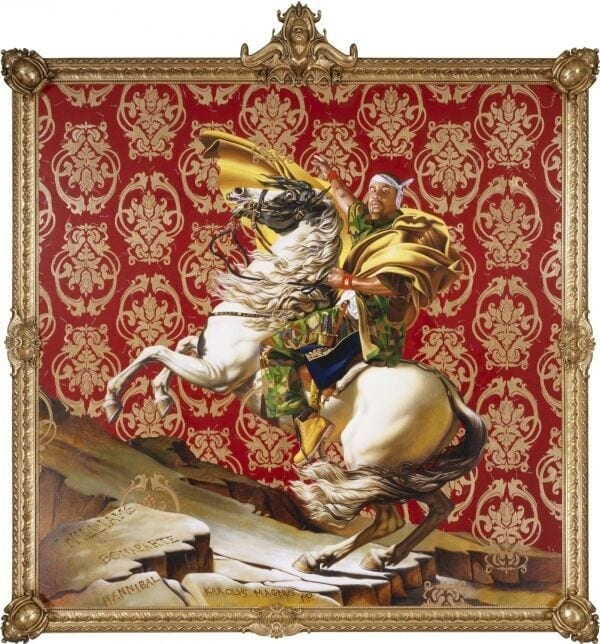 Kehinde Wiley’s Napoleon Leading the Army over the Alps, 2005.  Courtesy of the artist and Brooklyn Museum.

The thing for both of them is that [thinking about black people in the world] is something they’ve been thinking about for a long time in their work and in their lives. We’re in a cultural moment where other people have caught up to that. Of course, there are many people and artists who have been exploring these issues, not only in relation to African-Americans or people of African diaspora, but just in general. I worked on LaToya’s show in 2013 and then Kehinde was 2015. A lot had happened in those couple of years. I mean, nothing happened in 2014 that hadn’t happened in 2010 or 2011 or ’12, but people’s response and the way in which it’s galvanized Black Lives Matter, etc., has also galvanized a much larger conversation. That’s the connection between those two artists. How do we bring out stories that haven’t been told? How do we draw attention to people that have been ignored? How do we say that those people matter quite literally?