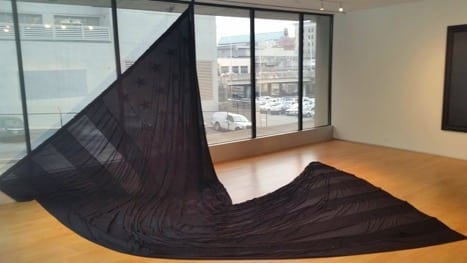 Review: Paul Stephen Benjamin collapses the past, present, future in “Come Over”

Paul Stephen Benjamin’s exhibition Come Over will strike your eardrum well before any of the pieces come into view at Gallery 72 (through April 7). But if you follow what sounds like a vintage recording of the “Star-Spangled Banner,” the visual impact will stop you in your tracks.

Measuring 10 x 18 feet, the nearly seven-minute video projection Oh Say is a compilation of African American vocalists singing the national anthem from the 1960s to the present. Fleeting black-and-white images of Jimi Hendrix, Stevie Wonder, Beyoncé and others play across the screen against backdrops of professional sporting events and political gatherings. Uniformed soldiers saluting the flag are juxtaposed with the faces of five American presidents, including Barack Obama’s. And the evolution of time and group dynamics are brought into sharp relief as footage of the Jackson 5 singing before a completely silent arena in 1976 gives way to current-day renditions before spectators who cheer and whistle with abandon.

Though the idea of collapsing the past, present and future onto a single plane is a concept that fascinates him, Benjamin says he was inspired to compose Oh Say after pondering an unanswerable question, “If the color black had a sound, what would it be?”

Gallery coordinator Kevin Sipp, who curated Come Over, has been a longtime fan of Benjamin’s penchant for metaphysical thinking. “Many artists of color get relegated to reactionary types of art … that deals specifically with the body and not the concept. I wanted to mount his show here because Paul is one of those artists who forces people to jump back into the philosophical level around the discussions of blackness.”

The show’s title comes from its signature video installation, Come Over, Come Over. An assemblage of old-fashioned tube television sets featuring disparate imagery — from oversized fonts, to flickering portraits of sports icons, to a flock of starlings silhouetted against a white sky — the text-based work represents corresponding letters of the alphabet. The seemingly haphazard arrangement can be read from left to right or vice versa and is fronted by a tangle of wires and cables. Up close, the installation conjures a billboard or flashing neon lights, but step back and the same composition becomes an abstraction.

Exercise a bit of patience, however, and the wall might reveal itself to be a portal that invites the viewer to enter and decipher deeper meaning. A similar installation titled Black is the Color is currently on view on the contemporary art floor at the High Museum of Art.

“I work hard to make sure my work is not in your face,” explains Benjamin. “I think a work should be engaged multiple times. If you see a painting or piece of sculpture and know everything about it at first sight, why go back and see it again? I like how art can continue to inform and be experienced repeatedly.”

Benjamin uses language and visuals to challenge long-established cultural narratives and their casual acceptance with canvases titled Black Beauty, Very Black and a five-panel series called Black | Dark Black | Very Black | Totally Black | New Black. The colors take their names from paints that are sold commercially by Benjamin Moore, Valspar and BEHR, but their formal qualities and aesthetics are a nod to the paintings of Kazimir Malevich, a pioneer of geometric abstract art who produced multiple iterations of black squares.

Black Cotton Flag Made in Georgia, a 14’ x 27’ hand-stitched replica of Old Glory, has kinetic quality in spite of its static positioning. Benjamin, who is also a sculptor, says his work is about space, how an object works in space and how it fills the space, and he lists the materials used to produce the installation as “black cotton, black thread, black sweat and black blood.”

Though the artist acknowledges that his description could be mistaken as a metaphor for enslaved labor by rule of American law, he claims his intent is never to provoke any specific responses. Instead, he invites viewers to confront words out of context, reimagine cultural assumptions and reconsider historical perceptions of themselves and others.

“There is no right or wrong way to digest the material,” reasons Benjamin. “I enjoy it when people bring their own perspectives to the work … as opposed to me dictating what they’re supposed to see.”

Sipp calls the confluence of ideas and aesthetics of blackness (as a color, not a culture), “the perfect show, at the perfect time to have discussions around the issues of commodification, culture, identity politics, art in general,” and regards Benjamin as an artist who is elevating the discussion.

The impetus for scheduling what Sipp calls “a subversive artist talk” was to encourage group discussions around Come Over. “Bring your ideas, your insights and your baggage,” challenges Sipp. “Then once you’ve unpacked your baggage, let’s find out what Paul’s expression might it mean to someone else and explore the possibilities for finding common ground.”

Paul Benjamin will discuss his exhibition Come Over at Gallery 72 from 6 – 8 p.m. on March 24. The event is free and open to the public.