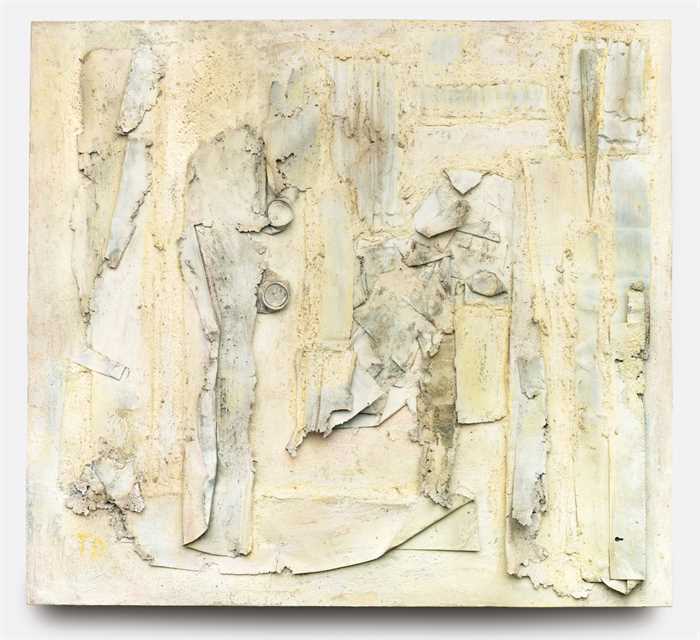 Preview: Men of Metal and Mettle, Hammonds House’s “To Pass Through and Be Gone”

Fathers and sons often have a peculiar relationship. In the case of Thornton Dial, Sr. and his sons, Thornton Dial, Jr. and Richard, that relationship plays out in the plot of their lives and in the work they create. With similar inputs of location and materials, yet different outputs in the tone and gravity of their art, the Dials seem to insinuate that their brand of heritage is more than simply something passed on by virtue of birth, but rather a notion that is cultivated and shaped and worked at throughout a life.

To Pass Through and Be Gone, the newest exhibit at Hammonds House Museum featuring work from Lonnie Holley, Joe Minter, Charles Lucas, Ronald Lockett and the aforementioned trio of Thornton Dial Sr., Thornton Dial, Jr. and Richard Dial, feels more like a conversation among elder community statesmen that we get to eavesdrop on than merely a collection of their work.

The common thread running through this exhibit, according to Hammonds House Museum curator Tracy Murrell, is that all of the works — on loan from the private collection of noted art patron William “Bill” Arnett — are created by men of Jefferson County, Alabama, include the use of metal and, as is often the case with elder statesmen, tell a story. While the Holley and Minter assemblages elicit a pensive curiosity, the most immediate point of interest of this exhibit revolves around the juxtaposition of the works of Dial, Sr., sons Dial, Jr. and Richard, and their cousin Lockett.

It’s probably too unfair to say that the health problems Dial, Sr. suffered from in recent years robbed his work of the energy that we’ve come to know from the artist, but it is evident in this show that these works — mixed media on canvas — lack some of that earlier vibrancy, and instead resonate with a subdued delicateness that is still captivating nonetheless. Pleasant isn’t the word that often comes to mind with respect to the work of Thornton Dial, Sr. but it almost works here. In Living Patterns (2014), The Palace (2014) and the exhibit’s eponymous work, To Pass Through and Be Gone (2014), the intensity that usually accompanies Dial’s earlier works simmers beneath the surface rather than confrontationally laying bare those emotions.

The artistic relationship between Dial and his sons begs for investigation and context. All six pieces of the elder Dial on display were created in the last few years of his life, after his stroke, with son Richard serving as his assistant and helping implement ideas. One must wonder if age and his physical limitations, plus those intimate creative moments with his son, helped foster the softer, subtle tension on display, as evidenced in softer hues in most of the works and the the use of flowers alongside the jagged edges of Struggling Garden (2014) and Coming Up with the Sun (2014).

On the surface, Thornton Dial, Jr. and brother Richard bear the expected weight of comparison that sons often do when it comes to their accomplished fathers, but they manage to sidestep direct comparisons with work that complements, rather than competes, with such a highly regarded legacy. Richard Dial’s works — elaborate metal thrones Untitled Chair 1 (2005) and Untitled Chair 2 (2006) — help solidify a connection between the artistic generations with a measured approach that displays a technical prowess and eye toward detail; Dial Jr.’s mixed-media collage Untitled (c. 1988) seems to delight in an abstract freedom, unconcerned with boundaries. Individually, the sons’ work take on distinct personalities, but taken together and in the looming presence of Dial, Sr.’s work, questions about creative identity, resemblance and the richness of their familial traits abound. Such is the way with fathers and sons.

The Joe Minter sculptures provide a visceral contrast to the Dials’ work. Two in the Field (1996) and Modern Sculpture 1 & 2 (2000) have a rugged, industrial quality that lead the viewer to pause and contemplate the length of time, environment and conditions that formed the individual pieces that comprise the works — rusting metal with sharp edges formed into either characters or symbols, depending on your perspective. Minter’s approach feels less about forming the metal, and more about making the pieces fit into something more than the collection of parts.

Ronald Lockett’s Verge of Extinction (1995) and Lucas’ Untitled (c. 1988) and Biting Off Her Nose (c. 1988) have similar physicality in their use of metal, but each demonstrates something unique in the artists’ capacity to add texture with intricate marks. Not coincidentally, Lockett’s death in 1998 of complications related to AIDS adds meaning to Verge of Extinction’s title, an acknowledgement of his own mortality. This leaves more questions than answers about what his career could have been had his life not been cut short at the age of 32.

The beauty of Lonnie Holley’s art is that it provides an opportunity for the viewer to see it as simple or complex as they wish, using the artist’s naming conventions as a compelling starting point and their own experiences as a filter to imagine the idea behind the work and the physical task of constructing it. Holley’s assemblages here are sparse, inviting both intimate inspection as well as some distance to appreciate how several pieces work together in the Hammonds House Museum space. Roots Going Down the Drain (2002) is an impressive amalgamation that looks exactly like what the title sounds like, but probably not how you would expect.

While the majority of Holley’s seven works on display have a degree of scale, however, it is perhaps one of Holley’s smaller works that provides the most interesting moment of contemplation. In Setting Liberty Free (2016) we encounter a caged miniature Statue of Liberty, a simple, poignant commentary that, given the current global political climate, strikes a daunting figure. Who has the power to restrict liberty? Is this power arbitrary? How did the Statue of Liberty, arguably the most recognizable symbol of freedom in the world, become trapped? Who opened the cage? These metaphorical questions serve to reinforce the thinking that Holley’s work often induces; the more time spent with the art, the more these questions arise.

It would be too lazy to label To Pass Through and Be Gone as just an exhibition in response to Thornton Dial, Sr.’s recent death in January. Sure, the temptation is there, but to accept that premise is to overlook the nuances of how each of these men have interpreted life on their own terms — a life in the South, a life of the South and ultimately, a life as an American artist.