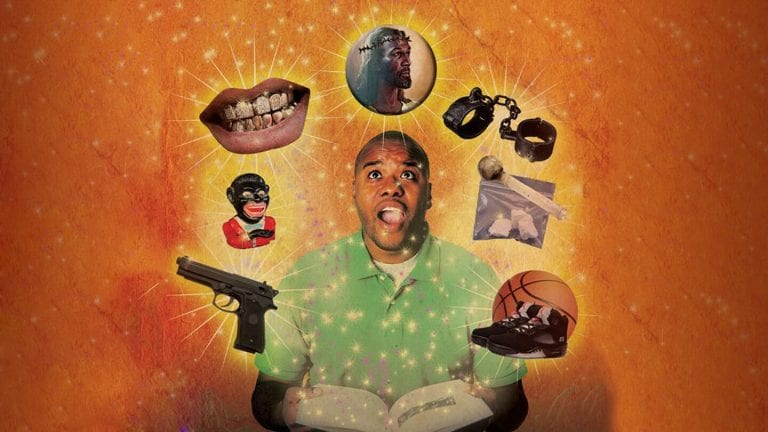 Preview: Mark Kendall takes on experience of being black in one-man “Magic Negro”

The black-experience obstacle course starts at the Middle Passage and goes through the Civil Rights Movement, but, uh oh, there’s a Flavor Flav moment and the entire race is set back. Better return to the Middle Passage for a semi-accelerated course. Performer and writer Mark Kendall takes audiences on a journey through stereotypes of black men in the media and why we laugh at them in The Magic Negro and other Blackity Blackness, as told by an African-American Man who also happens to be Black, onstage at the Alliance Theatre’s Hertz Stage from March 24 to April 15. Packed with jokes about everything from race cards to black crime coming to Cobb County because of MARTA, Kendall uses cultural events, from Colin Kaepernick to the Oscars, to create a sketch comedy experience in which In Living Color meets The Boondocks.

Kendall studied film at Northwestern University but did not start performing until after he participated in the Comedy Central Summer School internship. The program, which was sponsored by Chris Rock, allowed aspiring comedy writers of color to learn the business and shadow the writers of The Daily Show and The Colbert Report in New York City. He says that The Colbert Report writers encouraged him to try stand-up comedy in order to become a better writer by hearing his jokes out loud, so he did and has been performing ever since.

After college, when he moved back to Atlanta, he started taking improvisation classes and performing with Dad’s Garage, and it was while he was taking a solo performance class that he came up with The Magic Negro. He first performed the show at 7 Stages with Dad’s Garage, where Kendall is a resident member, and he has been touring an abridged version across the United States and Canada for three years.

Kendall applied for a Reiser Artist Lab grant through the Alliance and has been retooling and reworking it for the past couple of years. Anthony LeBlanc, a writer and director with The Second City in Chicago, is directing the production. Kendall tells ArtsATL that even though he is talking about very serious things, the show is meant to be funny first.

ArtsATL: What is a “magic negro?”

Mark Kendall: I think about the archetype we see a lot in American films where you have a white male protagonist and this older black gentleman who is supposed to be like their guide. For example, Will Smith in The Legend of Bagger Vance, Uncle Remus in Song of the South and a lot of the roles that Morgan Freeman plays from time to time. This older black man has super powers and wisdom, and it seems like his only function is to help the white person get what they want or need. [In the show] it’s my weird take on the benevolent slave.

ArtsATL: What is the show about?

Kendall: It’s a sketch comedy show that examines the way that we portray African American males in the media and how that affects the way we see African American men. The Magic Negro character is the host of the sketch show in the same way that in film the Magic Negro character is the guide for the protagonist. As the show goes on, it starts to question why do we like these characters and why do we find certain things funny or not funny.

ArtsATL: Who are some comedians you admire?

Kendall: I love how Chris Rock is able to take situations that are very complicated and describe them in a way that is understandable and maintains the complexity. I liked having the opportunity to watch Stephen Colbert and how he works, especially since a lot of his comedy comes from a place of optimism and positivity. I also enjoyed watching Dave Chappelle on his show, Key & Peele, and The Boondocks.

ArtsATL: What are some of the themes you explore in the show?

Kendall: I mess with stereotypes. I play the character of White Guilt and reimagine Fredrick Douglass as a stand-up comedian. I hand out actual race cards to the audience and go through the steps of how to use them. I talk about the Atlanta Braves moving to Cobb County and the potential spread of MARTA and crime to that area. I take some liberties. I completely address the audience and make it interactive.

ArtsATL: You’ve performed the show across the country. Do different people in different states laugh at different parts from the show?

Kendall: The response does not vary so much from place to place; it’s more about what the makeup of the audience is — age and race. Sometimes white people will laugh at certain parts and black people will laugh at other parts. If it’s more of a mixed crowd, that’s what I like seeing the most, because different people see other ones laughing at different points, which helps to drive home some of the themes of the show. It makes them notice that different people find different things funny and ask why.

ArtsATL: For those who may have seen the original Dad’s Garage production at 7 Stages, what can they expect from this one?

Kendall: A lot of material has been taken out and changed. There’s only one sketch that hasn’t had a rewrite, and the ending of the show is different. The 7 Stages version was more about how we put black people in boxes, but black people can be anybody. In this version we ask why are black people in a box to begin with, and how does that influence the way we look at and perform comedy? It’s more about the performance of blackness.

ArtsATL: What do you want audiences to take away from the experience of seeing this show?

Kendall: I’m not entirely sure. I try to make a point of not making jokes that make people feel bad. When I bring audience members up, it’s not to embarrass them, it’s to put them into fun, uncomfortable situations, and that is all improv. Once the audience is into the show they know that I am going to raise the tension and then break it consistently. The show is a lot about feeling as if you have to perform blackness. But, if you make a genuine connection with someone you feel less like you have to perform for them, which is an ideal way to live.