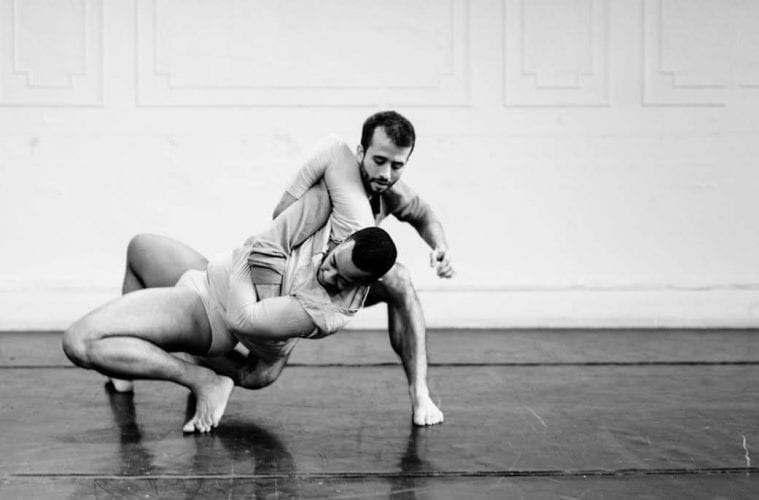 Preview: Dance Canvas has a year of firsts in annual showcase for emerging choreographers

For the culmination of its ninth season, Dance Canvas will present its annual showcase of emerging choreographers, Introducing the Next Generation . . . for the first time at Georgia Tech’s Ferst Center for the Arts Friday and Saturday. The show will also for the first time feature young “fellowship” dancers from Atlanta Ballet.

Though it’s the organization’s first time performing at the theater, their partnership with Georgia Tech began two years ago when Arts@Tech director Madison Cario sought out ways to help Atlanta’s dance community. The collaboration between Georgia Tech and Dance Canvas began with the college providing space for the organization’s summer program.

Angela Harris, founder and artistic director of Dance Canvas, expressed to Cario that finding affordable performance venues is her greatest challenge. She says the cost of renting theaters and producing shows is “astronomical” for small, nonprofit organizations and self-producing artists — a reality further complicated by the limited number of local venues and availability. The partnership led to Cario’s offer to present Dance Canvas during the Ferst Center’s 2016–17 season. “I was struck by the vision of Introducing the Next . . . that motivates Angela Harris and her team at Dance Canvas,” says Cario. “Across Georgia Tech, we are in the business of ‘creating the next’ and their vision of working with new choreographers with new voices in dance meets up perfectly with this.”

Cario says the school is shifting its focus toward work “at the intersection of science, engineering, art, and design.” With this objective in mind, Dance Canvas’s call for choreographers this season asked prospective dance makers to formulate ways to incorporate technology into their works. Harris says they received many intriguing proposals, and the challenges of bringing those ideas to fruition in the allotted time meant that some concepts evolved into using technology as inspiration, rather than physically including it.

The partnership with Georgia Tech also allowed Dance Canvas to present a preshow talk about the arts and science at the Atlanta Science Festival and collaborate in projects with graduate students of Dr. Michael Nitsche’s digital media and industrial design class.

Harris formed Dance Canvas in 2008 to fill a need in her artistic life. She was at the point of retiring from her performing career and desired to transition to creating dances. “There aren’t many ways to break into choreography,” she says. “I realized I couldn’t be the only one in this situation.”

Her solution was to devise a platform for emerging choreographers to present their work and receive mentorship. “We look for individual voices, different takes on styles and genres, and then help choreographers shape their ideas,” she says. “Not to change their voices,  but give them space to grow.”

Harris says that Dance Canvas “isn’t a traditional company, but is like an art gallery” — which is the source of inspiration for its name. The organization doesn’t have a rostered group of performing artists, but provides choreographers a network of professional dancers to choose from or sometimes holds auditions from which they can select performers. “The choreographer and the dancers they work with are autonomous, like mini companies,” says Harris.

In another first for Dance Canvas, this season marks a new milestone in its longstanding relationship with Atlanta Ballet: for the first time, the company’s pre-professional Fellowship Division will perform in Introducing the Next Generation . . . — an idea suggested by new artistic director Gennadi Nedvigin and Sharon Story, the dean of Atlanta Ballet’s Centre for Dance Education. “We are thrilled for the Fellowship dancers to have this experience with new choreography and to join the showcase,” says Story.

Dance Canvas’s connection with Atlanta Ballet goes back to the beginning of the organization when Harris approached former artistic director John McFall about a possible partnership. She says he was “incredibly supportive,” and Atlanta Ballet offered the organization discounted studio space for rehearsals. McFall attended Dance Canvas performances every year after that.

Dance Canvas likewise has a longtime partnership with Alvin Ailey American Dance Theater that’s expanded this year with the launch of Destination Dance, the company’s year-long outreach initiative with Atlanta. Harris hopes to have further collaborations with Alvin Ailey in the future.

Looking forward to Dance Canvas’s 10th anniversary next year, Harris says the organization has “exciting things” in store as it continues to “celebrate the power of emerging voices.” She says that since she is no longer in the category of “emerging choreographer,” her focus as an artistic director is creating programs for the next generation.

“Atlanta is such a fantastic place to grow ideas,” she says. “It’s like the dance community I knew in New York City. Everyone knows each other. Everyone goes to see each other’s shows.” Harris says that another aim is to find ways to provide career tracks for artists so that working in Atlanta is a sustainable, long-term option. For her, this goal is a return to why she started Dance Canvas in the first place: to a fill need.