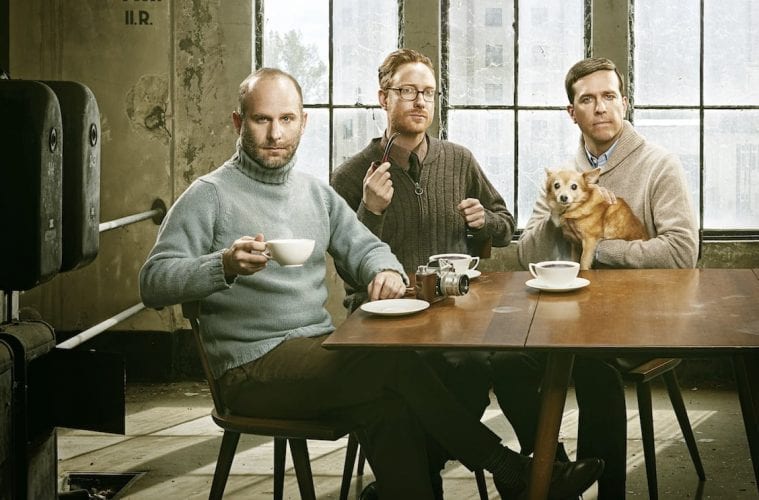 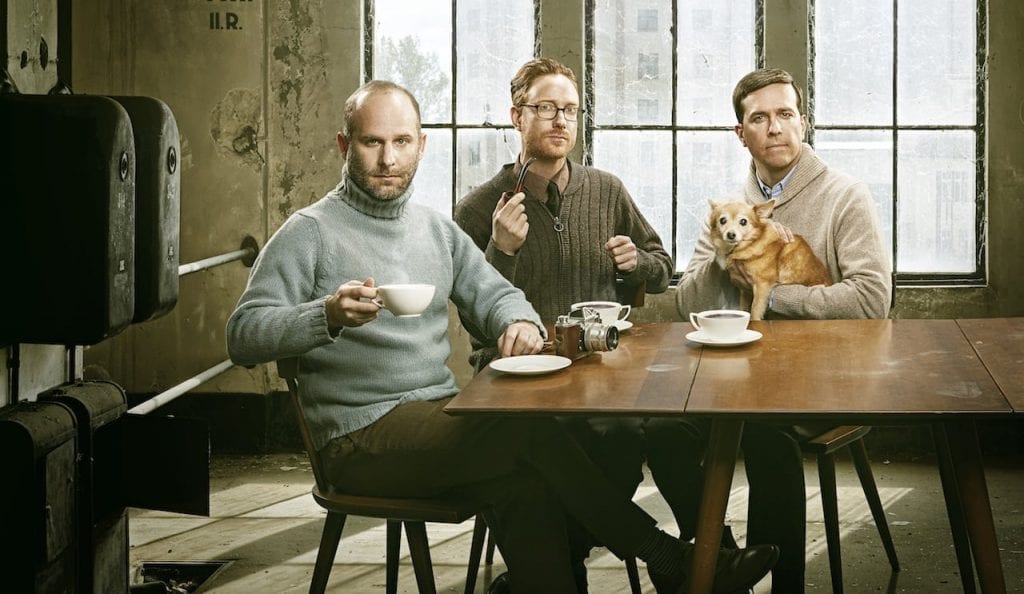 The first time Ed Helms played the banjo in front of an audience was when he was in the 11th grade at The Westminster Schools in a school production of Cotton Patch Gospel, the musical co-written by the late singer/songwriter Harry Chapin with Theatrical Outfit’s Tom Key.

The next time will be in a more elevated setting: Helms — now an A-list comedic actor — comes home June 8 to perform at Terminal West with his acoustic roots music band, The Lonesome Trio.

Home was Brookwood Hills, “an incredible enclave between Buckhead and Midtown,” Helms says in a telephone interview from Los Angeles. “It was a very peaceful little spot. There were clear creeks around there and train tracks; it was a great place to grow up.” 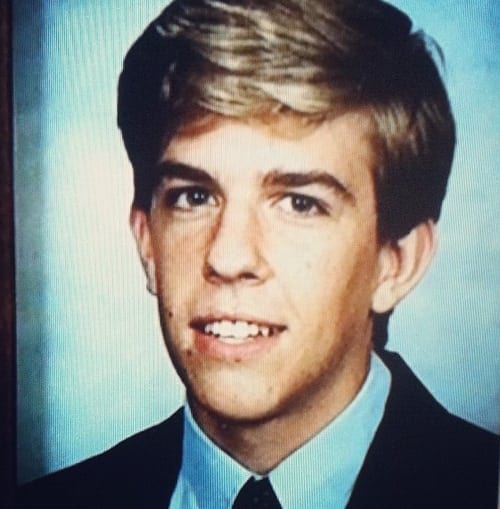 Helms as a youth in Atlanta.

He’s also a fan of Georgia’s growing reputation as the Hollywood of the South. “It’s so clear to me that Atlanta’s just bursting with creative energy, and I love that,” Helms says. “I’m proud of that, proud to be from there.”

Helms is best known as the comedic actor from The Office television series, and for his star turns in The Hangover movie series. He spent much of the fall in his hometown playing a grown-up Rusty Griswold in an updated version of the National Lampoon’s Vacation series, set to be released in July.

“I was overwhelmed by being back in the community I grew up in — with my mom and all her friends,” Helms says. Then he laughs. “And, of course, to feel that Georgia humidity.”

His music pedigree dates back to his Atlanta childhood when he began to take guitar lessons from Sam Worley, a guitar teacher in Garden Hills, who was mentored by the legendary Blind Willie McTell, author of the blues standard “Statesboro Blues.”

“Sam is a really remarkable teacher,” says Helms. “He is a real all-around musician in the folk traditions, blues, bluegrass and rock ’n’ roll. I was really interested in the roots stuff, even back then.”

Helms, however, was a latecomer to what has become his primary instrument: the banjo. His interest was piqued after the movie Deliverance came out with the “Dueling Banjos” soundtrack. And when Westminster needed an on-stage banjo player for Cotton Patch Gospel, Helms volunteered even though he didn’t play the instrument. 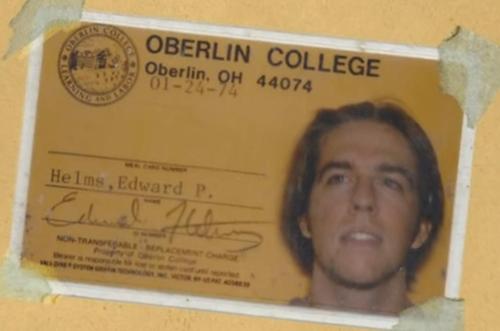 The Lonesome Trio formed when Helms was at Oberlin College.

“I borrowed a banjo and went to Sam, who taught me the songs,” he says.

Helms’ love for the banjo grew as he attended Oberlin College in Ohio. There, he met two other burgeoning musicians: bass player Ian Riggs and mandolin player Jacob Tilove. The trio formed a band they called Weedkiller. They performed at parties and local gigs, then carried on following graduation when all three moved to New York City. “That’s when I really buckled down on the banjo,” he says. “Since then, I’ve played both guitar and banjo.”

In New York, Helms kicked off his career in show business in the decidedly unglamorous job as an editor for a postproduction company. He also began to moonlight as a voice-over actor and stand-up comedian. That led to an audition with The Daily Show in 2002 and Helms’ big break as a comedy actor: a four-year run on the show as one of Jon Stewart’s correspondents. 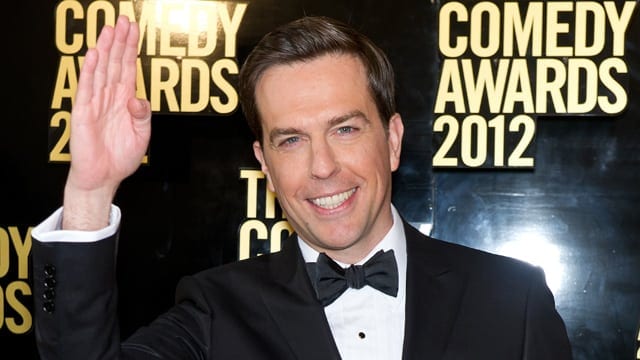 Helms’ music shows his seldom-seen serious side, outside his successful comedy career.

In 2006, Helms did an eight-episode stint on the television hit The Office as the prickly office jackass Andy Bernard (who’s obsessed with a cappella singing). It was meant to be a temporary gig, but turned out so well that Helms became a regular on the show. In 2009, he starred as Stuart Price in the blockbuster hit movie The Hangover, and went on to also star in the two sequels. 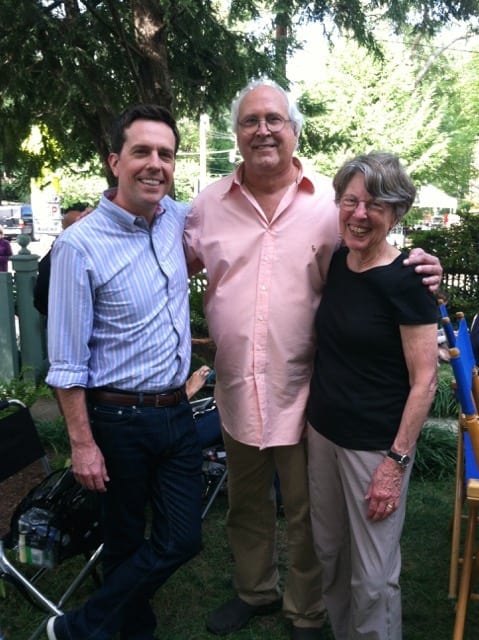 Helms and his mother, Pam Helms, with Chevy Chase on location at the Bellwood Quarry (standing in for the Grand Canyon).

This summer, he will carry the lead role in Vacation with Christina Applegate, which features appearances from the original Griswolds, Chevy Chase and Beverly D’Angelo. Helms also has his own production company with projects in the works.

Music, however, remains his first love, and one of the biggest moments of his life happens June 16, when one of the preeminent roots music labels — Sugar Hill Records — releases The Lonesome Trio, the eponymous debut album by the acoustic band Helms has had since college.

Helms and his friends from Oberlin never stopped playing together, even after Helms moved to Los Angeles to pursue his film and television career. They have appeared at the Newport Folk Festival, the Bluegrass Situation Superjam at the Bonnaroo Music and Arts Festival and at prestigious clubs in New York City and Los Angeles.

Those shows garnered the band notice from the bluegrass community of musicians.

“We’ve been playing together 20 years, and writing music the whole time,” Helms says. “But it was nothing we took seriously until we got some encouragement from people we trusted.”

One of those people was Gary Paczosa, Sugar Hill’s vice-president of A&R. “I got to know him and he was always supportive,” says Helms. “I gave him some demos and he said, ‘This is awesome; let’s do it.’”

The group made the album at the Echo Mountain Recording Studio in Asheville, North Carolina, where such artists as Widespread Panic, Dierks Bentley, Amy Ray (of the Indigo Girls) and even Steve Martin’s Steep Canyon Rangers have recorded. Paczosa served as co-producer and engineer.

“It felt really exciting,” says Helms. “I played mostly guitar on the album because we needed an instrument with body to it. And I’m really proud that the three of us played all the instruments on the record.” 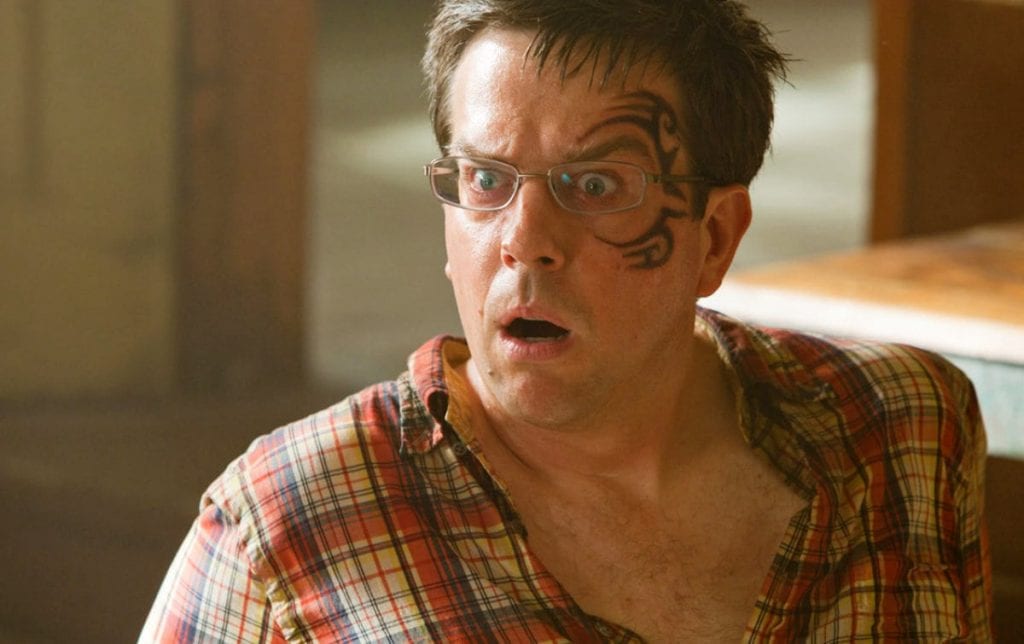 Helms with a Mike Tyson face tattoo in Hangover II.

Despite Helms’ comedic background, the album is straight-ahead acoustic music with a bluegrass edge (an exception is the sly humor in the Helms-penned song, “Asheville Skyline,” named after a city that has no discernible skyline). Helms handles most of the lead vocals.

He knows he faces the same kind of perception whiplash that faced another comedy star, Steve Martin, when he began to make serious banjo playing a focal point of his career.

Helms is friends with Martin and has jammed with him. He says The Lonesome Trio is much more than a vanity project to cash in on his celebrity. “I don’t think of it as switching gears or switching roles, it’s just showing different parts of myself,” he says.

He knows, however, there will be those who will think he should stick to comedy.

“That is certainly their right,” he says. “Any creative profession you throw yourself into is incredibly taxing and you are in a very vulnerable position. It’s scary and hard, and probably kept us from biting the bullet for so long. But who cares? We love it and are dying to share it.” 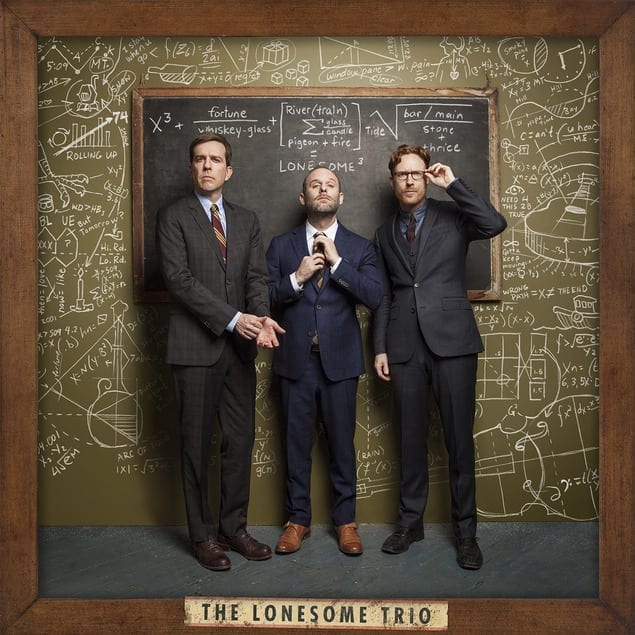 The Lonesome Trio will share their music on an eight-city tour this month that includes stops in Nashville, New York, Chicago, Boston, Los Angeles and Manchester, Tennessee for Bonnaroo.

Helms, of course, is already focused on the June 8 show in Atlanta.

“That will be a really fun and personal experience for me, a very special one for sure,” he says. “I can’t wait. It’s going to be a blast to have so many friendly faces and people I’ve known for my entire life.”

Helms gives a comedic pause. “The only added pressure,” he deadpans with a laugh, “is that my mom is going to be there.”