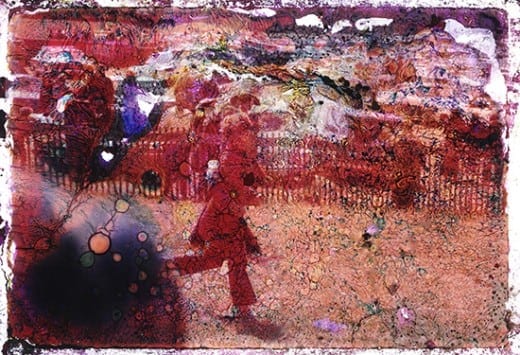 If proof were needed that the world of Lucinda Bunnen’s photography is full of surprises, “Lucinda’s World Part III: Weathered Chromes,” at Marcia Wood Gallery through June 20, would provide ample and exciting evidence.

This series was inspired by the discovery of two slides inadvertently damaged, leading the Atlanta artist to wonder if the same effect could be achieved by exposing slides to weather. Selecting images from six decades’ worth of work, she allowed nature to transmute them into something rich and strange.

Bunnen presents an amazingly diverse array of images thus transformed, chosen as the most striking images from the original lot. (Four works from the ’70s, created by experimenting with heat-process color printing on black and white paper, are also included.)

Most viewers’ immediate reaction is sheer aesthetic delight. The next thought might be, how could the weather produce such gorgeously surreal effects? Even someone who knows a bit about the layers of three colors in slide film might still be mystified by the dominance of pure yellow and magenta in Girl With Cow. Why does cyan disappear so much more readily in this case, when the yellow and magenta are downright saturated? Another work in the show, Sunset Over Tree, has faded to a delicate magenta; a quite different outcome.

Levels of degeneration of the emulsion have produced effects ranging from near-monochrome abstraction in one work — that was probably fairly abstract to begin with (Clouds) — to spots, blots and speckles representing an anomalous addition to an existing image (the illusory snow flurries of Hunt in the Snow).

As the latter title suggests, Bunnen has attached titles to some photographs based on what the degraded image resembles. Sea Monster, for example, shows a large amorphous shape hovering over the beach and the rolling waves of a seacoast.

Santee and Belinda is particularly mysterious in this regard, as what appears to be a burst of light or flame emerges from a horse’s body, and another from the trees behind the horse and her daughter. Similar fiery effects lend a mood of apocalypse to a street scene in New Delhi.

While some pieces are witty, most of the images are diversely lyrical. Green Light is particularly affecting, in that human figures appear in a small patch of undisturbed imagery that is surrounded by near-total blankness, an evocation of transience and fragility in the rhythms of solid-looking daily life.

When the transformational work is left up to the weather, what counts is the photographer’s sense of when to rescue the images and eventually select the most interesting among them. Bunnen has chosen with a discerning and experienced angle of vision, and has assembled a stunning and innovative exhibition (brought to perfection, as Bunnen acknowledges, by the meticulous printing of John Dean).

This third installment in the series Lucinda’s World demonstrates that she and it continue to grow and change.