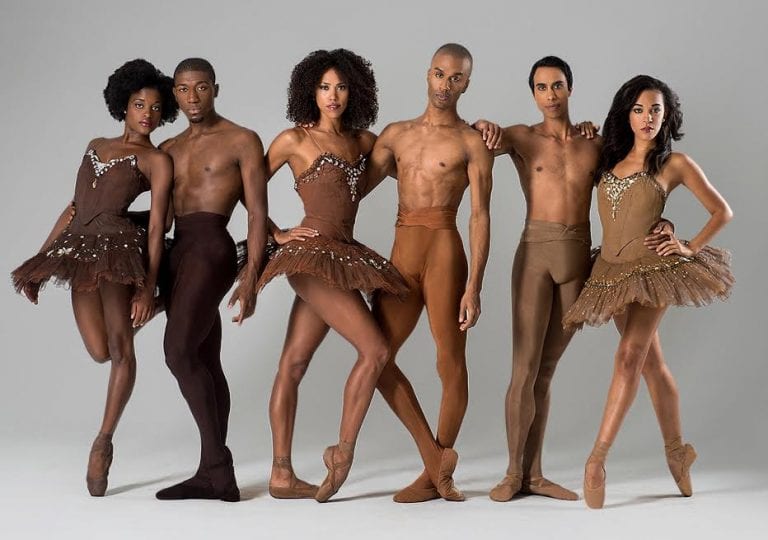 The Dance Theatre of Harlem changed perceptions about race in classical ballet. (Photo by Rachel Neville)

The groundbreaking Dance Theatre of Harlem returns to Atlanta for two performances at the Cobb Energy Performing Arts Centre from October 22-23. They will be joined by Spelman College Glee Club, which will provide live vocal accompaniment for Change, a work choreographed by Dianne McIntyre, a former Spelman Distinguished Visiting Scholar.

“For more than 47 years, Dance Theatre of Harlem has engaged audiences across the country and around the world with a vision of ballet that is relevant and inspiring,” says artistic director and former principal dancer Virginia Johnson.

That vision began in 1969 when Arthur Mitchell and his teacher and mentor Karel Shook founded Dance Theatre of Harlem, the first African-American classical ballet company. Its accompanying dance school was founded to provide access to dance for children in Harlem. Mitchell, who grew up in Harlem, was a barrier breaker in the world of ballet, the second African-American dancer at New York City Ballet when he joined in 1955. During Mitchell’s career, he eventually became a principal dancer. George Balanchine created notable roles for him, such as the male lead in the pas de deux from Agon and Puck in A Midsummer Night’s Dream. Just as Mitchell’s success challenged perceptions about African-Americans in ballet, so too did Dance Theatre of Harlem’s diversity challenge ideas about race in ballet.

Over the years, Dance Theatre of Harlem has performed a repertoire ranging from classical to neoclassical to contemporary ballet, including choreography by Balanchine, Alvin Ailey, and Agnes de Mille. For its performances in Atlanta, the Dance Theatre will present a mixed bill of works created for the company, three of which had their premieres earlier this year.

Divertimento — choreographed by Elena Kunikova, a graduate of St. Petersburg’s Vaganova Ballet Academy — is a tribute to classical ballet filled with allusions to famous works of the past. Set to a lively composition by Mikhail Glinka, it’s a showcase for the company’s technique and artistry. “While Divertimento is not a ‘story ballet,’ it is not without a story,” says Kunikova. “In it, three pairs of dancers, representing three different types of characters found in ballet classics (the sylph, the ingenue, and the aristocrat), interact with each other. In the end, as in all classical ballets, love conquers all.”

Return, choreographed in 1999 by the Dance Theatre’s resident choreographer and former principal dancer Robert Garland, melds different dance styles to the songs of James Brown and Aretha Franklin. “Return blends classical form and technique with the rhythm, nuance, and expression of African-American popular dance,” says Garland. “The hybrid nature of the work is in part a manifestation of the American democratic experiment, rooted in the diversity of its many different, yet unique voices. It also is an opportunity to pay tribute to American music legends.”

Choreographer Dianne McIntyre’s Change celebrates the tenacity, courage, and ingenuity of Black women. “I was inspired by women I have known and those I have heard about or read about who have made a difference in both broad strokes and tiny strokes that add up,” she says. “Their actions brought a consciousness to the public about the necessity of ‘freedom’ from omission, from oppression, from bondage, for all people of color.”

The creation of Change coincided with McIntyre’s time as a Distinguished Visiting Scholar at Spelman during the 2015-16 academic year. When she heard the “powerful and brilliant sound” of Spelman’s glee club, she knew she wanted to collaborate with them. In Change, their voices perform the spirituals By and By and Don’t You Let Nobody Turn You Around. In other cities on Dance Theatre of Harlem’s tour, the company has used recordings of the Spelman College Glee Club. But in Atlanta, the singers will accompany them live for the first time.

Change’s movement vocabulary incorporates elements of McIntyre’s modern dance background with classical ballet. “This work merges the elegance of dancing en pointe with off-balance and full use of the torso, rhythmic qualities and movement that attacks the space, and lyricism,” she says. “My style is this: dance is music in motion. The audience will see that musicality in bodies and hear that musicality in voices.”