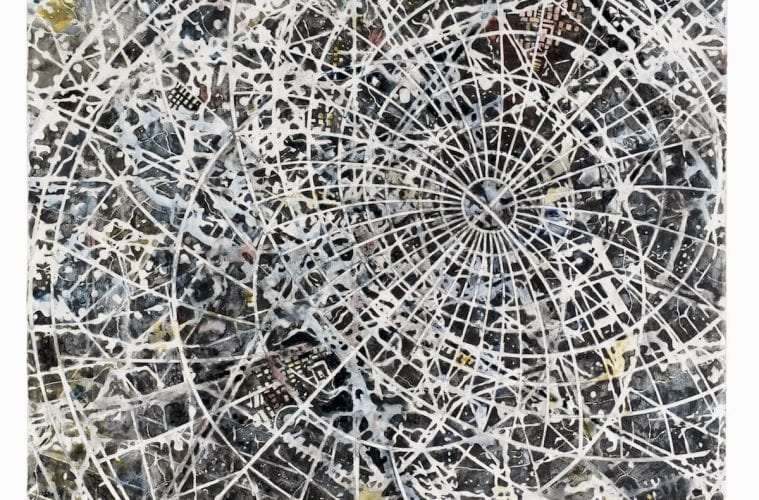 Cheryl Goldsleger’s Recent Works is on view at Sandler Hudson Gallery through October 22. Goldsleger is a renowned artist and educator who hasn’t shown work at Sandler Hudson in over a decade. Though distinct from her earlier work, her new paintings and drawings build on foundations from her former work dating back to the 1980s.

The subject of Goldsleger’s work is often built form; it is the subject of earlier works such as Stations: Analysis, 1983, or Arena, 1994. Sometimes she conceptualizes architecture, condensing its basic form into austere, gridded picture plane — as is the case in the labyrinthine abstractions of the early 2000s, such as Survey, 2006. In her recent work at Sandler Hudson, architecture remains a muse, yet the new work more overtly evokes cartography — suggesting an interest in the external world seen from afar with an analytical eye. 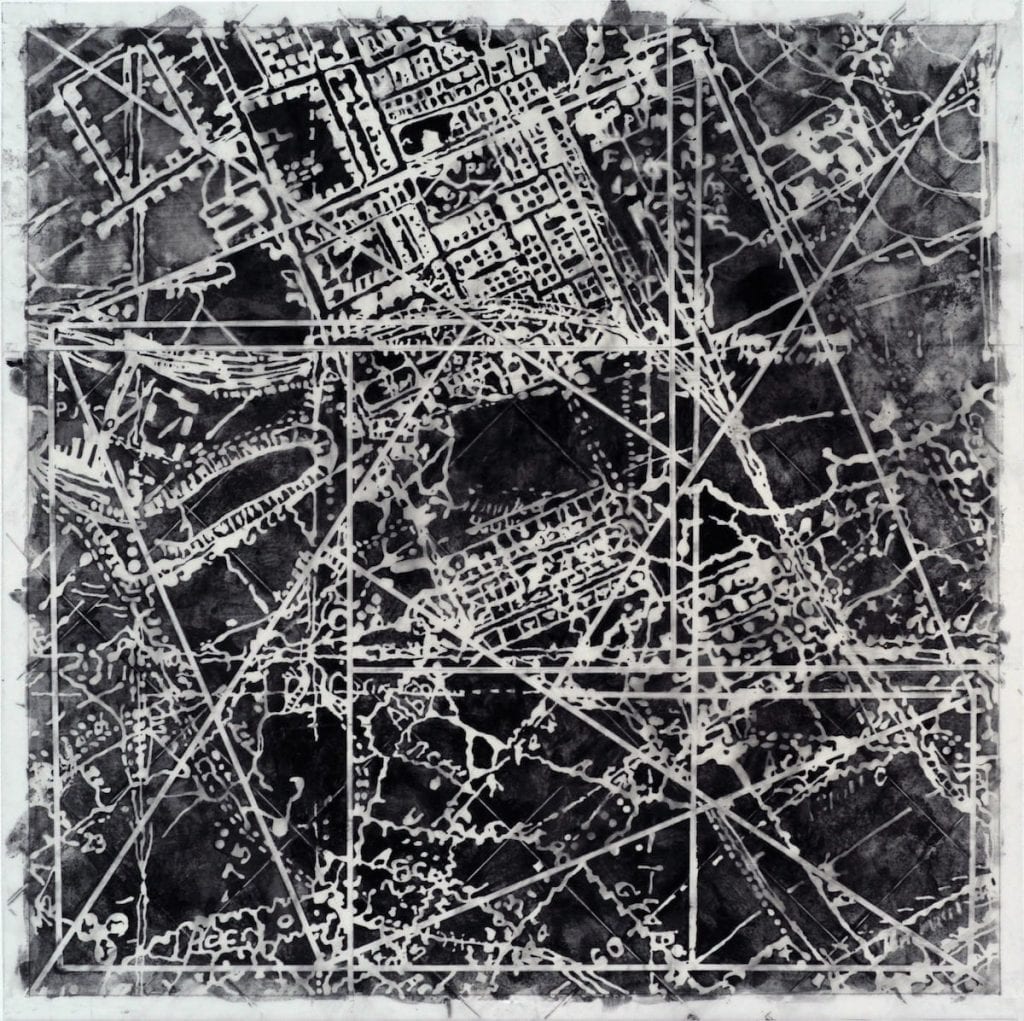 For this Recent Works, Goldsleger often limits herself to a grayscale, achieved in her drawings with aqueous graphite and delicate white lines created through a resist process applied to Dura-Lar. One such drawing is Impartial, whose title bespeaks cool objectivity. Aqueous graphite was applied in washes that accumulate in opalescent layers and suggest the convex and concave surfaces of a landscape. Dots and lines look like roads and neighborhoods from an aerial view. Human presence, then, is suggested but distant and unseen, and despite the unwavering specificity of Goldsleger’s drawings, the place is unidentifiable. Similarly, Navigation consists of intersecting, perpendicular lines that form an incomplete grid. Lacey passages of nebulous white read like clustered city lights seen from above. It’s as if we see the world through a screen, surveilled and plotted but unintelligible.

Goldsleger’s grisaille palette is sometimes broken with the addition of subtle color, as is the case with one of the largest and most commanding works in the exhibition, Indeterminate, a mixed media work on linen. A web of lines, it is imbued with order through a series of overlapping and rotating circles. Drawings such as Impartial insinuate human life from an aloof, but still imaginable vantage — a person looking down from an airplane, for example. Here, the scale seems cosmic and vast; human presence seems out of place. Rather, Goldsleger seems to map three-dimensional space on a macrocosmic scale. When imagining this work in the larger trajectory of Goldsleger’s career, it’s as if she’s floating further adrift, moving from the early buildings and structures — void of people, but humanistic — into midair and then, finally, out into space.

Yet, Goldsleger’s interest in labyrinths, structures built to obfuscate linear progress, remains. These spaces confound while also situating its occupants in an aestheticized environment that prioritizes architectural form over function. Such a space makes its occupant think about space as a visual and sensory experience. This notion, an abandonment of utilitarianism, seems applicable to Goldsleger’s new work.

Throughout Recent Works, Goldsleger uses intricate, sprawling lines to suggest topographical form captured by the discerning, empirical eye of the cartographer. But of course these drawings and paintings are, in reality, utterly intuitive and unscientific — anathema to the Enlightenment logic they mimic.  They fail to convey the kind of information one might expect from a map. This is a purposeful shortcoming, of course — one that mimics a labyrinth’s refusal to lead one directly from one point to another in favor of complexity and purposeful uncertainty. One way to read the paintings and drawings of Recent Works is to understand them as deconstructive; that is, they highlight the objective formal language Goldsleger manipulates so well. Her works showcase the visual elegance of maps and diagrams. Simultaneously, though, they map nothing more than the unknowableness of the universe we inhabit and believe, with regular and unchecked bombast, to understand.