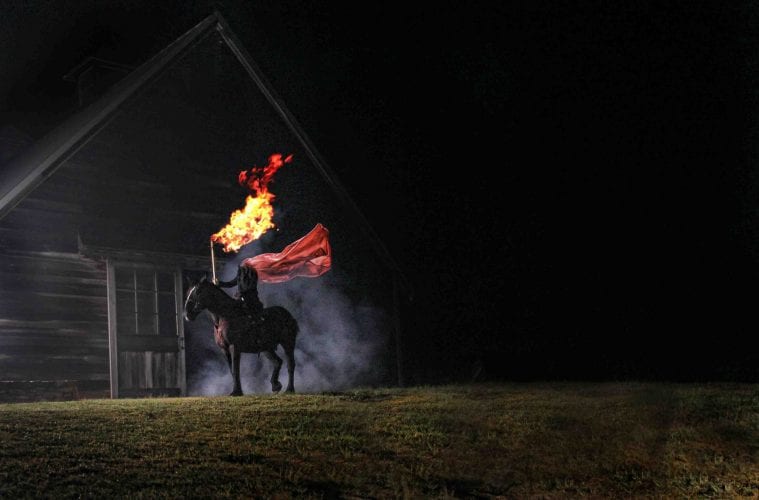 “Never work with children or animals” is a piece of advice that’s probably about as old as show business itself. But the success of the Halloween-themed production The Sleepy Hollow Experience at Serenbe Playhouse — and the reported ease of working with its cameo star, a horse named Thunder — suggests that the old adage may be in need of some amending.

“He’s a pretty awesome horse,” says Thunder’s trainer and rider, Anna Lanier, who also performs as the Headless Horseman in the show. The outdoor immersive site-specific production, originally staged in 2013, retells Washington Irving’s classic story about a ghostly horseman in search of his lost head. “Thunder knows his sound cues, which is really neat,” says Lanier. “At one show last year, my brain wasn’t all there and I just about missed a cue. But he stepped in. He hears that sound and he’s just like, ‘Okay. Time to go.’”

Considering the unwavering professionalism, it’s somewhat unsurprising to learn that the 24-year-old Percheron horse has been a performer nearly all his life. Thunder got his start as a jousting horse in the Georgia Renaissance Festival with his owners, Maria and Dave Hanson, who also performed as the festival queen and one of its knights. When it came time for Thunder to retire from the demanding jousting job, the Hansons decided that boarding him at Serenbe for occasional easy outings as part of the development’s trail-riding program would be the perfect fit for the gentle giant. In 2013, Serenbe Playhouse Artistic Director Brian Clowdus approached Thunder’s then-trainer and caretaker Ashley Thomas about casting the spotlight-ready horse in his show. Thomas performed as the horseman with Thunder for the show’s first two years, and Lanier took over the role last year.

Though the role of the horseman’s fiery black steed is pretty terrifying, Lanier points out that it’s all an act: “Thunder is as sweet as it gets,” she says. “I love him to death.”

And Thunder is perfectly happy to accept his payment in carrots and pretzels. “He loves those peanut butter-covered pretzels,” says Lanier. “We had them in the dressing room for the actors to snack on during rehearsals. One day, I just happened to have one in my hand and he kind of sniffed it, so I let him have one. Ever since then, it’s been his thing: I take him a pretzel before I get on him for the show.” 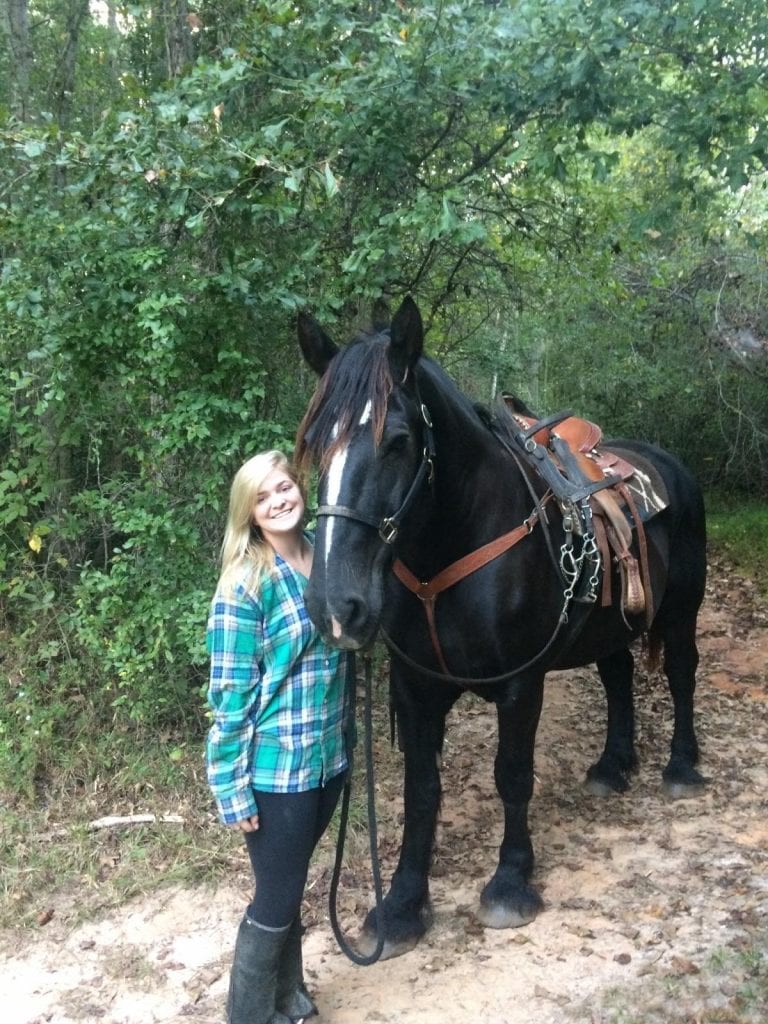 The real Headless Horseman, Anna Lanier, and Thunder the horse.

Sleepy Hollow director Ryan Oliveti says it’s obvious Thunder enjoys the stage. “There just aren’t as many hardships as one would expect with a horse in the show because he loves it so much,” Oliveti says. “It’s been easy. It feels so weird to say that when you’re dealing with an animal, but it’s true.”

The cast of human actors also gets along great with the horse and one of the most anticipated rehearsal days each year has been the first day when Thunder is on-site. “The actors get a half hour where they just hang out with him,” says Oliveti. “He’s really a full-on cast member. He has his own call time. The actors talk to him before the show. He gets treated better than I do on the set.”

Oliveti took the director’s seat for the first time this year because the show’s creator, Serenbe’s Brian Clowdus, is currently in New England overseeing an independent new version of the show in the historic town of Sturbridge, Massachusetts. Oliveti adds that it goes without saying that the New England production will also feature a horse and rider. “People freak out,” he says. “It turns out if you put a horse in a show, whether it’s Oklahoma or Sleepy Hollow, it’s all anyone wants to talk about. People love it.”

The show runs through Halloween to November 6, after which Thunder will return to the Serenbe pasture, taking a week or two off before getting back to work taking visitors on trail rides. And even when Lanier’s done performing as the Headless Horseman, Thunder’s rider says she’ll keep close to her equine friend. Lanier works as a nanny for a Serenbe-based family with an 11-year-old daughter and a 5-year-old son, a position she’s held since graduating high school three years ago. “I stay in Serenbe and I still get to ride Thunder, which is awesome,” she says.