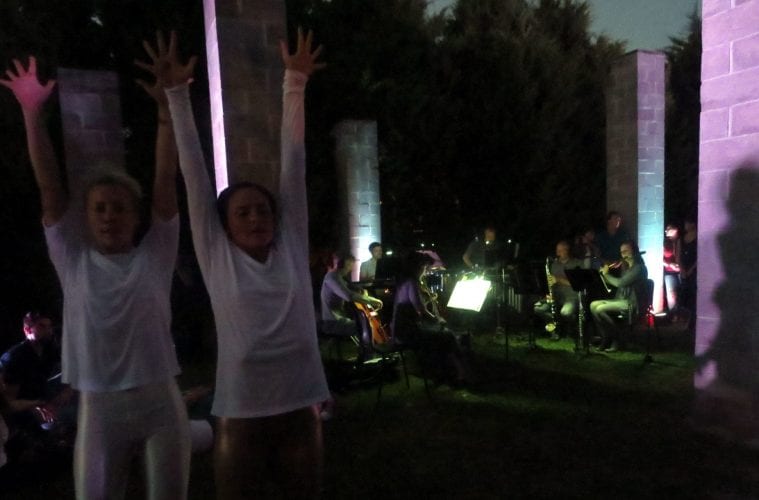 Bent Frequency opened their 2016-17 season on Saturday night with the U.S. premiere of A wave and waves created by composer Michael Pisaro and percussionist Greg Stuart. Pisaro and Stuart were both present and involved in the performance, which took place in the basement level of the Mammal Gallery parking deck at 76 Forsyth Street as part of this year’s “ELEVATE: Microcosm” events.

A wave and waves utilizes 100 different percussion sounds, one player per sound, with the musicians set up in a 10 x 10 grid and the audience seated among them. To get the 100 players needed, percussionist Stuart Gerber, Bent Frequency’s co-artistic director, put out a call for volunteers via email and social media “seeking Atlanta-area creative musicians for a unique performing experience.” In the end, says Gerber, “We got the 100 players we needed, though it was a daunting task to assemble a volunteer group of that size.”

The performance held forth in a fairly dark environment, with purplish up-lighting on the pillars and walls replacing the stark white fluorescence of the deck’s utilitarian ceiling lights. The 70-minute work was divided into two parts of exactly 35 minutes each, with a pair of large-screen count-up clocks displaying the number of elapsed minutes, guiding the performers through the timed score.

The first part, “A wave,” was a single arching gesture, which grew in volume and then receded through a process of accumulation of sounds in layers, with as many as 50 of the musicians playing simultaneously at its peak. Individual instruments remained at the same soft dynamic level throughout, only the accumulative process changed the overall loudness. The second, “waves,” brought dynamic and spatial aspects more clearly to the fore with a large number of short, faster-moving arch-like gestures. The music’s sonic center seemed to travel around the performance space as each wave of sound rose and fell, skittering and bounding across the concrete room in a colorful tapestry of sound.

A mere two miles away from that Forsyth Street parking deck, as the crow flies, is the site of Sol LeWitt’s public sculpture, “54 Columns,” located in a small strip of Freedom Park at the intersection of Highland Avenue and Glen Iris Drive. It served as the location for a collaborative, hybrid performance between new-music-and-technology ensemble Sonic Generator and movement art company glo on Monday evening as one of the cultural offerings of France-Atlanta 2016.

Sonic Generator had premiered a single movement of Wohl’s “Cycles” in February 2014 at the Arsenal de Metz, France, then gave its U.S. premiere that May at Erikson Clock in Atlanta’s Castleberry Hill District. Even then the intent was for that eight-minute piece to be part of a much longer work to be choreographed and performed with glo.

Sol LeWitt’s “54 Columns” is simply that. Installed in 1999, it is 54 block-and-mortar columns of varying height, constructed from common cinder blocks, within a somewhat triangular portion of an otherwise grassy open space. Each column is anchored on a slightly larger cinder-block base that’s flush with the ground, and has a solid, flat slab cap on top. In this performance, portable up-lighting units at their bases made them look like ominous obelisks.

Stallings’ choreography began and ended in silence, with another large quiet passage intervening at one point when the musicians left their seats and joined the dancers in movement. Nevertheless, Wohl’s “Cycles” shared in the majority of the performance time. The music seemed largely pensive, even doleful, with prominent long tones in the fore, though some segments of greater momentum, with overlapping rhythmic patterns that offered a more cheerful tone.

The dancers roved, and most of the audience became a herd, following them. It was at times impossible to see over or through the moving audience. So I gave up, and went back to the chair where I was originally seated, waiting for the choreography to come to me rather than pursue it. And at times it did, passing between people, chairs, columns and parked bicycles. At one point, three of the dancers were hoisted up onto columns by helpers, where the up-lighting illuminated from below.

When the music ended, the crowd mostly disbursed — but the performance was not yet over. One lone dancer continued to perform in the northwest corner of LeWitt’s array of columns. A few astute people noticed, and remained to watch in earnest, even as gear and lights were being packed away.