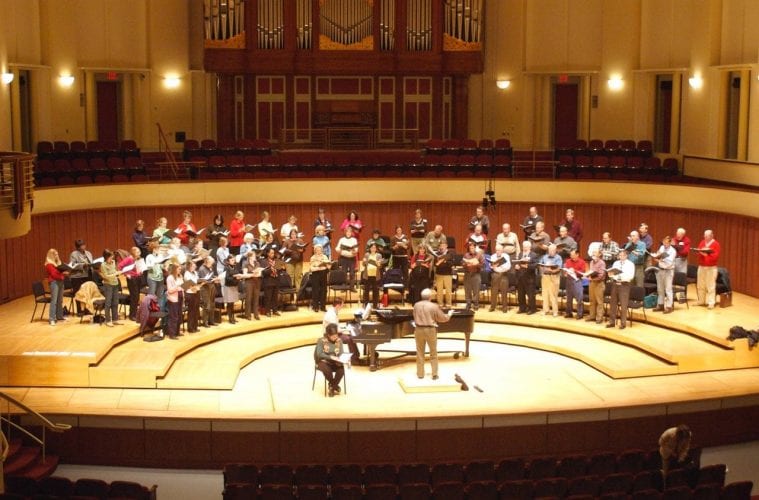 Collegium Vocale has been at it since 1955. That’s an impressive legacy — Robert Shaw didn’t establish the Atlanta Symphony Orchestra Chorus until 1970.

In recent decades, choruses have become so popular that it’s hard to imagine a world without them. But in 1955, it would have been difficult to hear a concert of Renaissance and Baroque vocal music. That’s when Emory University lecturer Homer F. Edwards Jr. decided to recruit some singers; gathering friends, students, faculty and their spouses, he founded the group now known as Collegium Vocale.

Today, Collegium Vocale is part of a vast community. With an estimated 270,000 choirs in America, participation in choral ensembles — by a landslide — exceeds that of any other genre in the performing arts. A study from Chorus America demonstrated that more people regularly participate in vocal ensembles than on baseball teams.

Something else is unique to this art form: in many of the world’s finest ensembles, the singers are unpaid. Collegium Vocale (and the ASO Chorus, for that matter) are all volunteer. That doesn’t mean there isn’t a rigorous audition process.

Collegium Vocale opens the 2016-17 season November 12 at Glenn Memorial United Methodist Church on the Emory University campus with a potpourri of works under the theme The Road Home, also the name of the a cappella piece by Stephen Paulus to be sung in the second half of the concert. Collegium Vocale will be joined during the second half by the Creekview High School Camerata.

The oldest music comes from Handel’s 1743 oratorio Samson: the popular chorus “Awake the Trumpet’s Lofty Sound.” And there are nine living composers on the program (which is something for an art form that regularly performs music over 1,000 years old).

“Most definitely I am drawn to this music with contemporary harmonic language,” says Kevin Hibbard, Collegium Vocale’s music director. It’s a language he calls “triad-plus,” which is to say it has the purity and beauty of music from an earlier age — but with a distinctly contemporary accent. In fact, the abundance of choral ensembles has made the art form one of the most fertile arenas for today’s composers.

“I am always on the lookout for new repertoire,” says Hibbard. “I find most of it by listening to choirs at choral conferences. I take notes in performance programs about the pieces that I like, whether accompanied or with instruments, and any special requirements, such as a very high soprano solo or lots of low basses.”

The ethnic diversity in this music is striking. There are works by German, Austrian, American, Canadian, Scottish, Lithuanian and Czech composers. But it’s more complicated than that.

For instance, the three Moravian Duets (1876), by the Bohemian Antonín Dvořák, were written in Prague as a favor to a homesick Moravian merchant. The man suggested that Dvořák use three Moravian poems as his text. Dvořák agreed and was so happy with the result, he entered the duets in a competition and they launched his career. They got published and were shrewdly marketed to the Austrian and German public as exotic “Czech music.” Dvořák has been celebrated as a Czech nationalist ever since, but would have understood the distinction between Bohemian and Moravian poetry. Those differences are all but lost on us today.

It is customary for Collegium Vocale (and most choruses) to sing music in its original language. Most people winning a spot in Collegium Vocale are expected to be able to sight-sing in French, German, Latin, Italian and Spanish. But that expectation doesn’t extend into Slavic languages such as Czech, which is used in the Dvořák piece.

“We are helped by having a score that includes a phonetic pronunciation of the text,” says baritone Carl Johnston. “Equally or more importantly, one of our longtime members is a native Czech speaker, and has been a huge help.”

The Baltics are also represented on this concert. “Giedrius Svilainis is a Lithuanian composer and choral director,” says Johnston. “He’s presently very active in both careers in his native country.” Born in 1972, Svilainis spared the choral world from having to add a Lithuanian language requirement; his “Vox Populi” is written in Latin.

The simplest text on the program consists of one word: “Alleluia,” set in long, melismatic phrases by American Randall Thompson. “I sang this first in the Emory Glee Club in the 1960s,” says baritone John Lilly. “I was an undergraduate at Emory and Dr. Lemonds [one of the early leaders of Collegium Vocale] was the director. I think it’s one of the best pieces that Thompson wrote. It’s amazing what he could do with one word and his music. Such a range of feeling.”

Surprisingly, it was a Canadian composer (perhaps looking southward in the dead of winter) who contributed a Spanish-language piece to the program. Mark Sirett used a text from the Puerto Rican Christmas carol “O Brillante Estrella,” setting it to a Spanish form called the villancico, which reaches all the way back to the Middle Ages.

“It’s unlike anything I’ve ever sung before,” said Johnston. “It’s like singing a tango. It’s very evocative of a different part of the world.”

The program concludes with three pieces that draw upon early American music, ending with “Saints Bound for Heaven,” an arrangement by Ohio-based organist and conductor Howard Helvey. This folk hymn tune comes from the shape-note singing tradition and was first published in 1840 in William Walker’s Southern Harmony.